Skip to content
Here’s the History of Yellow Ribbons, and It’s Stranger Than You Think

Here’s the History of Yellow Ribbons, and It’s Stranger Than You Think 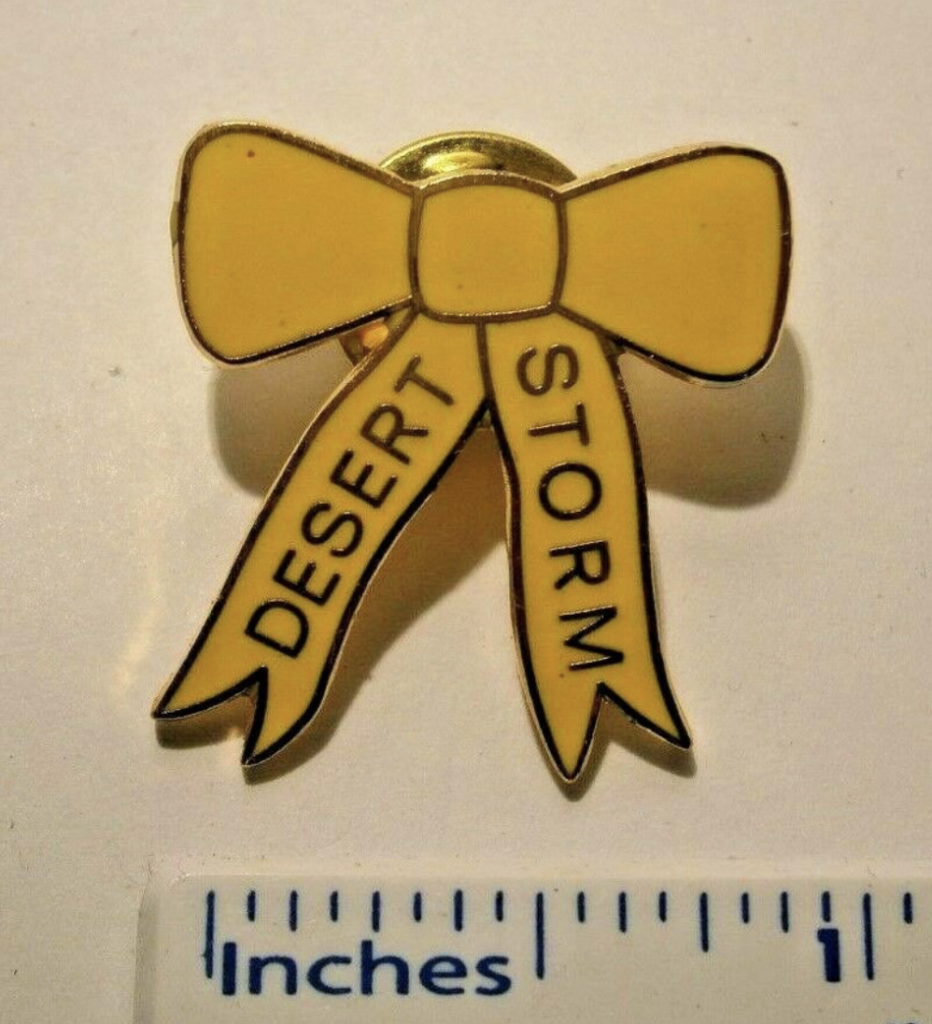 Last week on the VBC Happy Hour, I speculated about the origins of yellow “Support the Troops” ribbons, which were much displayed in 1991 during the First Gulf War. Desert Storm Marine veteran Tim Steitz passed along a fascinating article from the Library of Congress’s American Folklife Center that cuts through some of the murky history to reveal a bizarre and convoluted tale.

Turns out, the yellow sashes worn by Puritan Roundhead soldiers and the yellow scarves of the cavalryhave little—if anything–to do with the tradition.

Displaying a special item to remember a loved one far away goes back to hundreds of years, but the first copyrighted song to specify a yellow ribbon was George A. Norton’s “Round Her Neck She Wears a Yeller Ribbon” (For Her Lover Who Is Far, Far Away) published in 1917. Here is the oldest known recording of it.

Norton’s song was a good fit for World War I, when 2 million men shipped overseas for war. The song features a soldier named Silas whose girl, named Susie, is left back home:

‘Round her neck she wears a yeller ribbon,

She wears it in winter and the summer so they say,

If you ask her “Why the decoration?”

The song drew upon an folk tradition that included such older ballads as “All Round My Hat” from 1838, which itself was a variation on a still older British canon. In “All Round My Hat,” it’s the man who longs for an absent woman. And he wears “a green villow” (sung for some reason, in a strange Germanic dialect) round his hat in remembrance.

College students sang off-color versions with lyrics that substituted a garter ‘round the leg for ribbon round the neck. A few had the pregnant woman team with her shotgun-toting father to search of the missing man.

Director John Ford revived the folklore for RKO Pictures in 1949 with “She Wore a Yellow Ribbon,” a hugely popular Hollywood western starring John Wayne. The Andrew Sisters recorded an updated version of the 1917 song for the movie.

That movie really should have been the high water mark of yellow ribbon imagery in American culture. But, somehow, through the mysterious alchemy of folklore, an item of song morphed into an actual real-life practice. 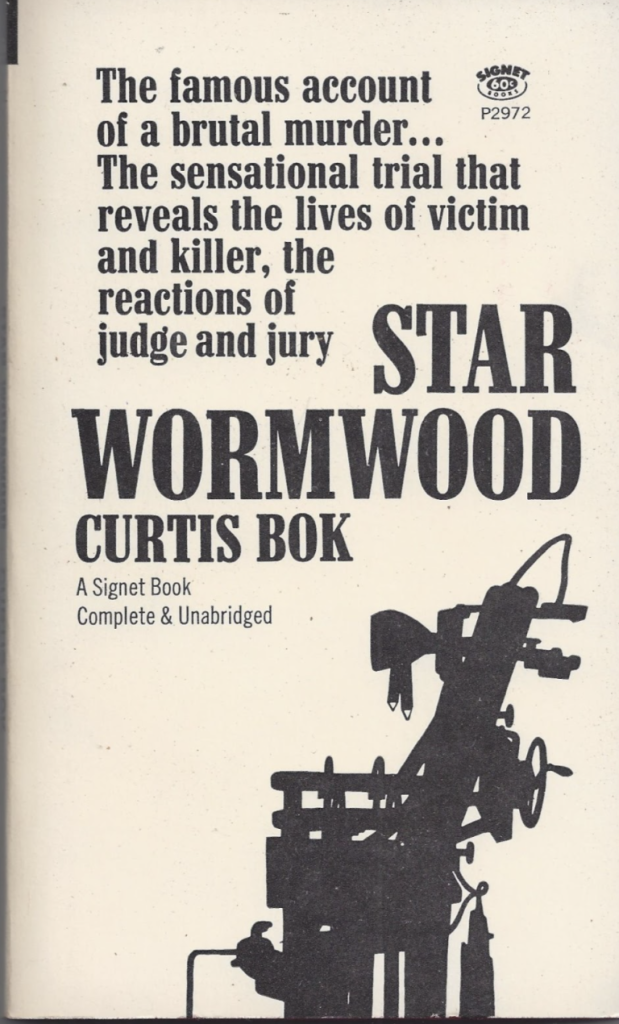 A key ingredient to this transformation was a fictional story told in a gruesome 1959 novel about a boy who kills a girl and eats her . . . yes, cannibalism. Star Wormwood by (former Pennsylvania Supreme Court Justice) Curtis Bok contains this anecdote recalled third-hand about two men on a train:

A convict returning from five years’ imprisonment in a distant prison . . . had written to [his family] to make a sign for him when he was released and came home. If they wanted him, they should put a white ribbon in the big apple tree which stood close to the railroad track at the bottom of the garden, and he would get off the train, but if they did not want him, they were to do nothing and he would stay on the train and seek a new life elsewhere. He said that they were nearing his home town and that he couldn’t bear to look. His [train companion] said that he would look and took his place by the window to watch for the apple tree which the other had described to him.

In a minute he put a hand on his companion’s arm. “There it is,” he cried. “It’s all right! The whole tree is white with ribbons.”

This story got around—or, perhaps, had already been circulating by word of mouth before the novel—and was then told and re-told with slightly differing details.

In 1971, Pete Hamill crafted a new version of it for the New York Post. In it, he substituted a yellow handkerchief for the white ribbon and an oak tree for the apple tree. Readers Digest reprinted Hamill’s storyin 1972, and ABC-TV rushed out a feature starring James Earl Jones as the ex-con.

The following year, Tony Orlando and Dawn released a smash hit with “Tie a Yellow Ribbon Round the Ole Oak Tree.” It’s hard to exaggerate just how popular this song was. Radio stations played it several times a day, every day, for months. It topped the charts in eight countries. And it hit with multiple generations, not just youth. I distinctly remember older aunts and uncles singing it when I was kid.

Pete Hamill sued the songwriters, Irwin Levine and L. Russell Brown, for copyright infringement to no avail. The story wasn’t his. It belonged to our collective folkloric imagination.

It’s one thing to sing about tying a yellow ribbon around a tree. It’s another to actually do it.

This is where, in perfect 1970s fashion, Tony Orlando and Dawn collides with Watergate. Inspired by the song, Gail Magruder decorated her front porch to celebrate her husband’s return from prison. Some of you might remember her husband, Jeb Stuart Magruder, the Nixon campaign operative who helped to plan, execute, and cover up the Watergate break-in in 1972. News cameras captured the scene of Magruder’s homecoming to a festoon of yellow ribbons on January 8, 1975.

One person watching the news that night was Penne Laingen, whose husband Bruce was a diplomat in the US Foreign Service. Four years later, President Jimmy Carter would appoint Bruce Laingen to be U.S. chargé d’affaires in Iran. Five months after his appointment, on November 4, 1979, student revolutionaries seized the U.S. embassy in Tehran and took fifty-two American hostages, including ranking diplomat Bruce Laingen.

Back in Washington, Bruce’s wife Penne tied a yellow ribbon around an old oak tree in her front yard. “So I’m standing and waiting and praying,” she told the Washington Post, “and one of these days Bruce is going to untie that yellow ribbon. It’s going to be out there until he does.”

Families of the fifty-two hostages formed an organization called FLAG (Family Liaison Action Group) to keep the crisis in public awareness. In cooperation with allies, including the AFL-CIO, Chambers of Commerce, Boy Scouts troops, and churches, FLAG chose the yellow ribbon as the symbol of their campaign. They distributed 10,000 yellow ribbon pins to prominent Americans around the country, including TV weather reporters. In 1981, the hostages were released after 444 days, and the yellow ribbon was cemented as the symbol of a nation’s fidelity to those in harm’s way far from home.

Ten years later, with the launch of Operation Desert Storm, Americans turned to the established folklore to express their support for those fighting the war. Yellow ribbons spouted like daffodils in spring, decorating front doors and mailboxes, lamp posts and traffic signs.

An interesting thing about these yellow ribbons of 1991, however. They were tied in a traditional Christmas-bow style with a knot, two loops, and two hanging tails. Two more steps were needed for the ribbons to achieve their current, iconic single-loop profile.

The first came on June 7, 1991, at the Tony Awards on Broadway. Presenters and guests appeared wearing red, single-looped, inverted V ribbons to signify AIDS awareness. Fifteen members of the group Visual AIDS had handmade them, and the top of the inverted V was more knot than loop.

The final step came in 1992—which the New York Times declared “The Year of the Ribbon.” Self magazine and the cosmetics company Estee Lauder teamed to publicize the pink ribbon for Breast Cancer Awareness. Estee Lauder gave away 1.5 million ribbons at their cosmetics counters that year. The ribbon was in the style of the inverted V, but with the top knot loosened into a loop.

That elegant single-loop design is now a staple of all sorts of awareness campaigns. You can find ribbons in dozens of colors for all sorts of illnesses and conditions.

But the yellow ribbon remains reserved for “Support the Troops.”