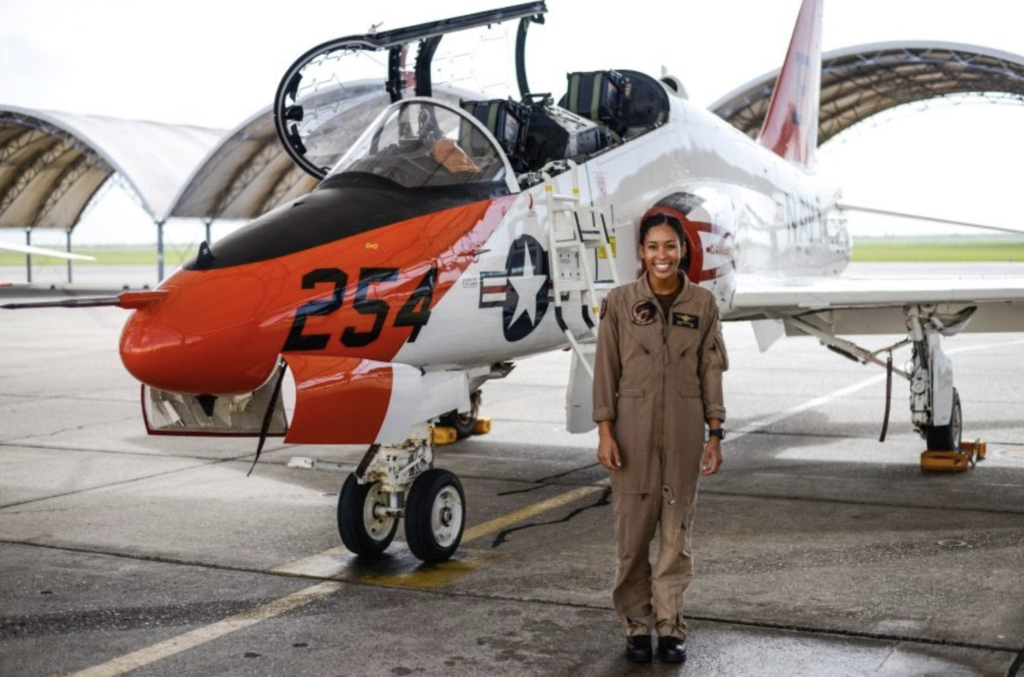 Image from the U.S. Navy via military.com

Lt. j.g. Madeline Swegle made history in July 2020 as the US Navy’s first Black female fighter pilot. She completed Tactical Air Strike pilot training and received her Wings of Gold on July 31. According to the Navy, the Virginia native will be flying with the Redhawks, a training squadron stationed in Kingsville, Texas.

Swegle is a pioneer, and she follows in the footsteps of Black servicemen and women who have come before her.

Jesse Leroy Brown grew up in the Jim Crow South in Hattiesburg, Mississippi. He worked as a child in corn and cotton fields, and watched planes fly overhead. He soon decided that’s what he was going to do when he grew up. In 1947, Brown was accepted into Navy flight school, becoming the first Black man to do so. But he faced prejudice and harassment at nearly every turn from instructors, midshipmen, and even mess hall stewards. Brown pressed on, training for carrier-based aircraft flight in Pensacola, and becoming the first Black pilot to earn Wings of Gold. In 1950, on the way to Chosin Reservoir, Brown radioed that he thought he had been hit, and crash-landed his Corsair onto the side of a mountain. Rescue was impossible, as his right leg was trapped by the instrument panel. Brown was the first Black Navy officer killed in the Korean War. He was awarded the Distinguished Flying Cross posthumously.

Lt. Commander Brenda E. Robinson became one of only 10 women to attend the Navy’s Aviation Officer Candidate School in 1977–just one year after the Naval Academy started accepting women. In 1981, she became the first Black female Navy pilot ever. She was also the first Black woman to earn Wings of Gold.

As a kindergartener, Shawna Rochelle Kimbrell dreamt of becoming an astronaut–so much, she wrote a letter to NASA asking how she could join. Her space travel dream transformed into a dream of flight, and as a fourth grader, she decided she would be a fighter pilot when she grew up. She loved stepping outside her Parker, Colorado home and watching jets fly overhead. At age 14, she had her first flight lesson. Soon, she was enrolling in the Air Force Academy. Kimbrell became the first African American female fighter pilot in the Air Force in 1999.

A Bravo Zulu is in order for  Lt. j.g. Madeline Swegle!