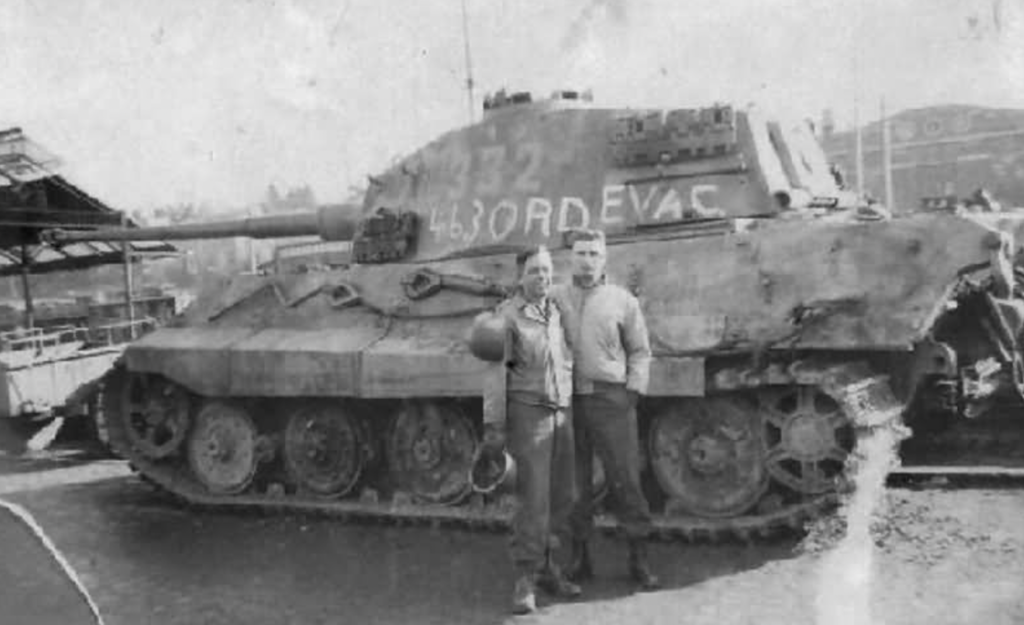 Harry Miller joined us April 19 and shared the story about how his 740th Tank Battalion captured an elusive and formidable target: a German King Tiger (Tiger Royal Mark VI) tank. Tiger 332 was the only in-tact tank of its kind captured during the war, and it now resides at the Armored School at Fort Benning. Harry kindly shared with us his eyewitness account from Christmas Eve 1944.

Several accounts have been written about the only in-tact German Tiger Royal (Mark VI) tank Number 332 captured during WWII. In every account, mistakes and untruths have been made. In an effort to set the record straight, I present the true story of Tiger 332.

One incorrect version was written by someone who should have had his facts straight but did not. The incorrect version I refer to was written by a former director of The Patton Museum of Cavalry and Armor at Fort Knox, KY. However this learned man was not there when 332 was Captured so he had several facts wrong. Since I was there and the man that captured 332 was assigned to my unit and was a personal friend of mine, I will therefore correct the story and tell how it all happened and why it is important to have the record correctly recorded. 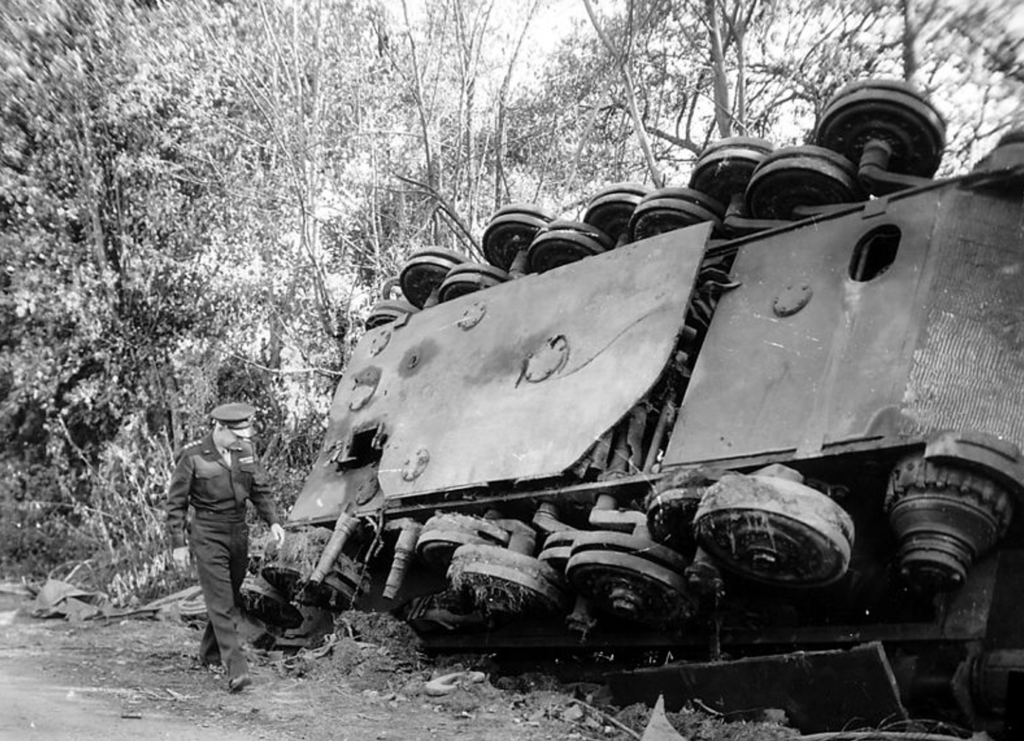 Personnel and U.S. Army units involved in the real story:

During the Battle of the Bulge, which took place in the Ardennes forest of Belgium and Luxembourg from December16,1944 to January 25, 1945, the 740th Tank Battalion of the First U.S. Army as a separate Battalion was available to First Army for assignment to anyInfantry Division requiring tank support. At the beginning of the Battle of the Bulge, the 740th Tank Battalion was hurriedly assigned to the 30th Infantry Division for five days then transferred to the 82nd Airborne Division which had been given a position to hold on the north Shoulder of the Bulge. (We remained with the 82nd after the Bulge when we crossed the Siegfried Line into Germany). The Bulge was a three pronged attack by the German 6th Panzer (tank) Army in the north shoulder, the 5th German Panzer (tank) Army in the Center and the German 7th Army (a non-tank Army) in the South shoulder. The town of Bastogne which most unknowing people think was the entire Battle of the Bulge was in fact only a part of the Battle.

The real story of the German Tiger tank number 332 started on a very cold night during the Battle of the Bulge when my good friend Sgt. Glenn D. George and his Sherman tank crew were patrolling down a fire break lane in the forest as snow fell during this coldest winter on record in Belgium. Suddenly he came upon a German Tiger Royal (Mark VI) bearing the Numbers 332 on its turret.

Usually, coming face to face with a Tiger tank was the last thing a person ever saw, but in this case Glenn George thought the crew must be sleeping due to their inaction. He then instructed his gunner to fire a star shell above the Tiger to discover why the Germans had not acted upon seeing George’s tank. When the star shell burst above the Tiger, the German crew immediately bailed out of the Tiger and ran for the cover of the forest. George then knew the Germans had been sleeping and the star shell bursting above the Tiger probably made the Germans in the tank think they were on fire and abandoned the Tiger. George told me that he had fired on the crew as it bailed out of the tank with the 50 cal. machine gun on his tank’s turret killing three of the German crew and wounding one. He believed the fifth German crew member ran away unscathed. After this, George inspected the Tiger and decided it was in-tact and was useable.

He then called our Battalion Commander, George K. Rubel, informing him that he had captured a Tiger and was going to drive it to Berlin. This radio conversation was heard by T/4 LeRoy Myer who overheard the conversation because the Battalion Commander had a radio in his Jeep which Meyer drove. When Glenn George reported to the Colonel he had captured 332, Col. Rubel told George to get out of that tank and continue his patrol before some G.I. sees you and knocks you out. “No way. I’m staying with this thing as long as I can. Maybe I’ll get in close with another Tiger and knock it out”. With that, Col. Ruble told George that he (Rubel) wanted to send an in-tact Tiger to the Aberdeen Proving Grounds in Maryland for evaluation.

Nevertheless, George continued on in 332 but did not find another German tank to knock out until finally 332 ran out of fuel and had to be abandoned near the small town of Coo, Belgium. George informed Col. Rubel the location of 332 and continued on his way in his own Sherman tank. 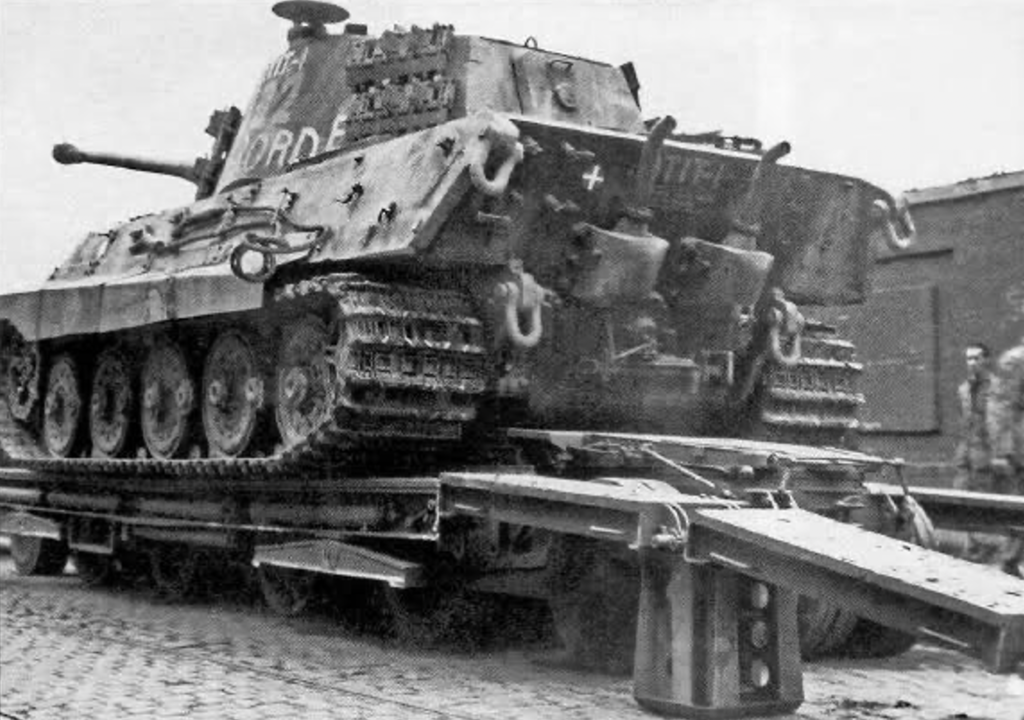 The next morning, Col Rubel informed First Army Headquarters that a German Tiger tank had been captured and was on the road near Coo, Belgium should they want to send it back to Aberdeen for study. Since no other Tiger like 332 had ever been captured in-tact, First Army directed the 463 Ordnance Evacuation Company to pick up the Tiger and take it to Spa, Belgium Railway Station for shipment to the Port of Antwerp, Belgium and further shipment to the U.S.

The 463rd Ordnance Evacuation Company arrived at Coo with a flat bed trailer usually used for a Sherman tank which was much smaller than the Tiger. The first problem however was the metal tracks of the Tiger were frozen to the ground due to the harsh winter. To be able to move the tank, gasoline was poured on the ground and around the tracks and ignited freeing the tracks from the frozen ground. The Tiger was then able to be winched onto the flat bed trailer however, due to the width of the Tiger about half of each track of 332 extended past the width of the trailer. Of course the exceptional weight of 332 flattened the eighteen wheels of the trailer and made pulling the trailer very difficult for the prime mover tractor assigned to pull the trailer. (This information was taken from writings on the backs of photos taken by the 463rd of the tank retrieval). After much work, the 463rd Ordnance made it to Spa, Belgium and unloaded 332 next to the Spa Railway Station where many photos were taken. Most famous of all photos of 332 shows it being inspected by Col Rubel and his Staff which appears in our Battalion history book.

Noted especially was that the 463rd Ordnance had painted “463 ORD EVAC” on 332’s turret giving the impression it had been captured by them. After a few days, the 463rd placed 332 on a railway flat bed and took it to Antwerp where it was placed on a ship and sent to the U.S. still with “463 ORD EVAC” painted on the turret 332 arrived in the U.S. and was shipped by rail to Aberdeen Proving Grounds in Maryland where it was examined, tested, and studied. When completed it was placed outside in the open where it remained painted in a silver/gray color for some 40 years. It was then sent to the Patton Museum of Cavalry and Armor at Fort Knox, KY. While at Fort Knox it was cleaned up and the left side was sliced off to reveal the inner workings of the tank. It was painted in proper colors and the number 332 was again painted on its turret. 463 ORD EVAC. was no longer visible nor should it be. 332 was placed in the museum for all to see but the story of the capture was portrayed erroneously. 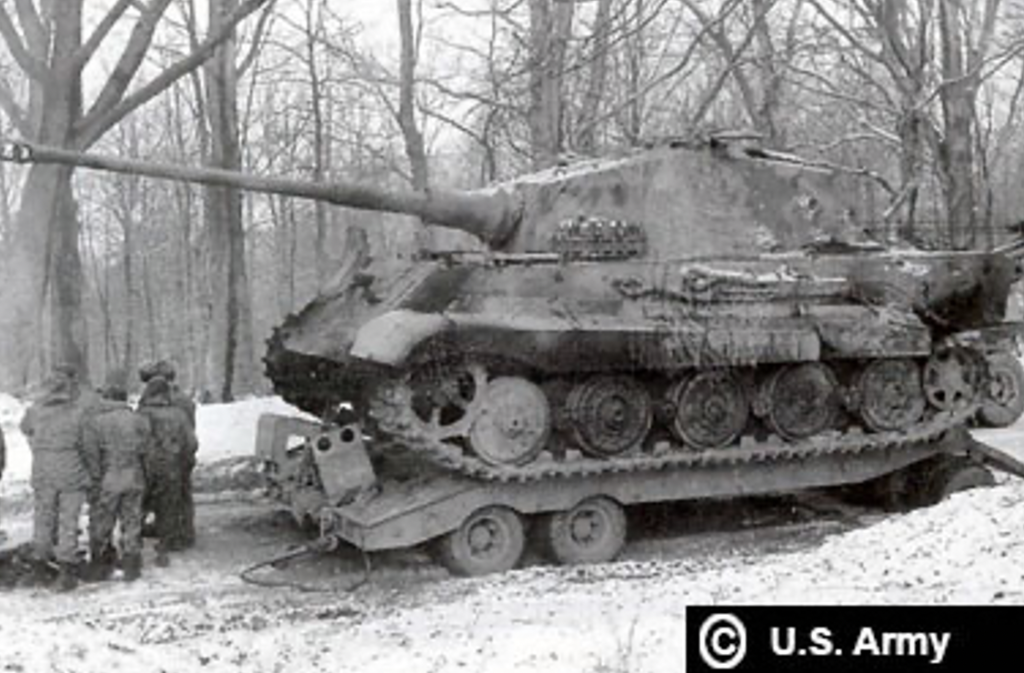 The Manager of the museum in his infinite wisdom placed a plaque in front of 332 in the Museum which stated that 332 had been captured during the Battle of the Bulge by the 463 Ordnance Evacuation Company.

During a visit to the museum, I once again saw 332 and read the plaque. To say the least, I ran to the museum manager and complained that 332 was captured by the 740th Tank Battalion and I knew the man that got it. Well, the Manager was insulted. He told me that Veterans of the 463 Ordnance claimed they had captured it. I then told the manager that Ordnance troops never captured anything but V.D. in a rear area brothel and that I would send a tape to him with Glenn George’s story of how he captured 332. Finally the Manager said, If I could prove it he would change the plaque. I then told him to read our Battalion history book he had in his museum library and he would see who captured 332.

When I arrived home, I telephoned Glenn George and told him what happened at the museum.His first comment was: “No sir, by God, I got that S.O.B..” I then asked Glenn if he would tell the whole story of how he got 332 so I could record it on tape cassette and give it to Museum director. He agreed and told the story as I have related it here.

My next visit to the Fort Knox Museum I noted a new plaque with our 740th properly given credit.

Today, April 18, 2017, 332 reposes in a garage building at Fort Benning, GA awaiting a new home when ever a museum is built to house 332, the only in-tact Tiger Royal German Tank captured in the Battle of the Bulge by the 740th Tank Battalion NOT THE 463 ORD EVAC CO.