The Short & Glorious History of the Marine “Field Jacuzzi”

The Short & Glorious History of the Marine “Field Jacuzzi” 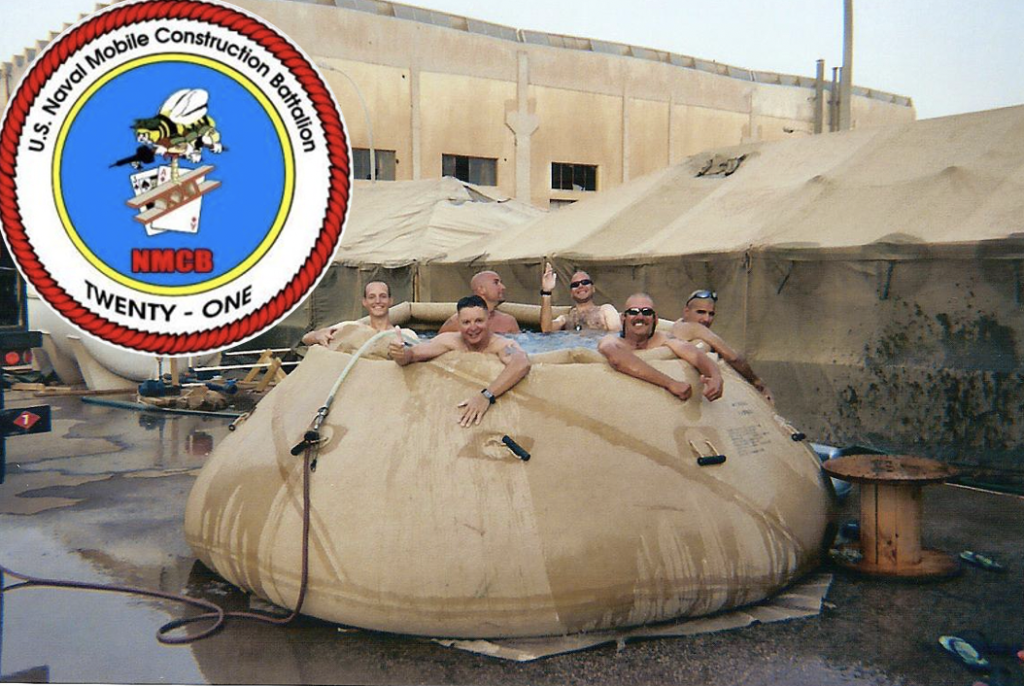 This story from SeaBee veteran Derek Sansone (NMCB-21, Black Jack Battalion) reinforces my conviction that the SeaBees is the most ingenious branch of the military.

My Reserve Navy Seabee Battalion was activated in January 2003 as part of the build-up for the invasion of Iraq. A few months into deployment, 125 of us arrived at a train station outside of the Iraqi city of As-Samawah. The 2nd Battalion, 5th Marines had recently arrived from Baghdad, some 170-miles north.

These Marines were as filthy and bedraggled as any I’d ever seen. They hadn’t showered in 6 weeks. Their sea bags were still pier-side in Kuwait. All they had were their assault packs and change of uniform.

The Marines had heard they were getting a SeaBees detachment. With SeaBees, they knew, came field showers, which they desperately needed.

It took us two days to get the showers up and running. We decided that none of us SeaBees would shower until every Marine had done so.

Part of being a SeaBee is observing what needs to be done and then improvising, as necessary, to achieve it. After the showers were up, we noticed Marines sitting on a curb eating MREs. Trucks and Humvees drove by, kicking up dust that landed on their food.

We went to work building picnic tables to get the food off the roadside. We added camouflage netting for shade. It’s hard to understand the importance of creature comforts unless you’ve been without them. It didn’t take much effort on our part, and it meant the world to the grateful Marines.

Next, we made a long convoy to the sea port in Kuwait to retrieve their seabags so they could have just a few more comforts.

To keep the showers going, we made “water runs” to the Reverse Osmosis Water Purification Unit in downtown As-Samawah (which pumped & filtered water out of the Euphrates River). We used it for messing (washing dishes), shaving and to fill our giant water bladders for the field showers.

We happened to have an extra bladder and came up with an idea. We added another truck to our water run.

When it returned, we used the water to fill the spare bladder.  Then, we ran a hose off the Water Truck Air Compressor (for its Air Brakes) and just like that, we had a “Field Jacuzzi”—a giant bathtub with bubbling water. It was glorious!

Word got out about the improvised hot tub in camp. Some women from an Army National Guard MP unit even came to check it out.

For some reason, the Commanding Officer of the 2nd Battalion, 5th Marines CO wasn’t as impressed as the MPs were. Maybe he objected to the waste of water and truck fuel. I can’t think of any other reason for his discontent (I didn’t ask).

The jacuzzi came down as quickly as it went up. Another SeaBee innovation ahead of its time, I suppose.

The famous SeaBee slogan–“We Build, We Fight”—deserves a small print addendum: “We Have Fun.”