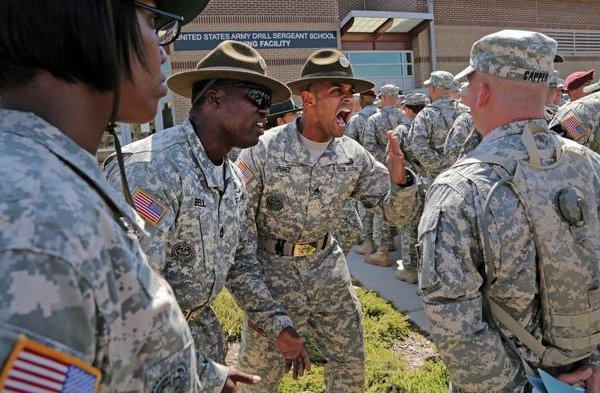 In the summer of 1956, after completing six weeks of Basic Training at Lackland AFB, San Antonio, Texas, I was assigned to Scott Air Force Base at Belleville, Illinois, to become a Personnel Records Specialist, Airman First Class. We lived in a two-story WWII-era barracks with room for 150 men and a bunch of cooks-in-training who learned on-the-job.

One night, I drew guard duty. My job was to protect the barracks with a sawed-off eighteen-inch broomstick. I patrolled both floors, between the bays of bunks, making sure the trainees were “safe”—lights out and asleep.

After a few passes, I stopped outside the room of our Training Instructor (T.I.), the Air Force’s version of a Drill Sergeant. T.I. Fowler was a feisty Air Force brat with curly red hair, fierce temper, and thick Georgia accent. He fit the T.I. profile perfectly. There was always a lot of yelling, cursing, spitting, imaginative obscenities. The accent made him difficult to understand at times. My name is Lutz, one syllable. Somehow, he always managed to stretch it out to “LUU–utz.”

On this night, about 0030 hours or so, Fowler was playing cards with three other T.I.s.

Knees shaking, I stepped in the room. “Sir,” I announced.

“Get me four cooks, NOW!” he ordered.

I quickly headed up the stairs to the bunk bays where the cooks-in-training slept. I hated to wake them. They went on duty at 4:30am to prepare breakfast for 6:00am. But, that was the order.

The four cooks pulled on their pants and staggered down the stairs to Fowler’s room.

The blinkered men stood at attention before the card-playing T.I.s.

Fowler turned his head to the men in astonishment. Then, he leveled his eyes at me.