Pedal to the Metal in a White-Knuckled Race Against Time 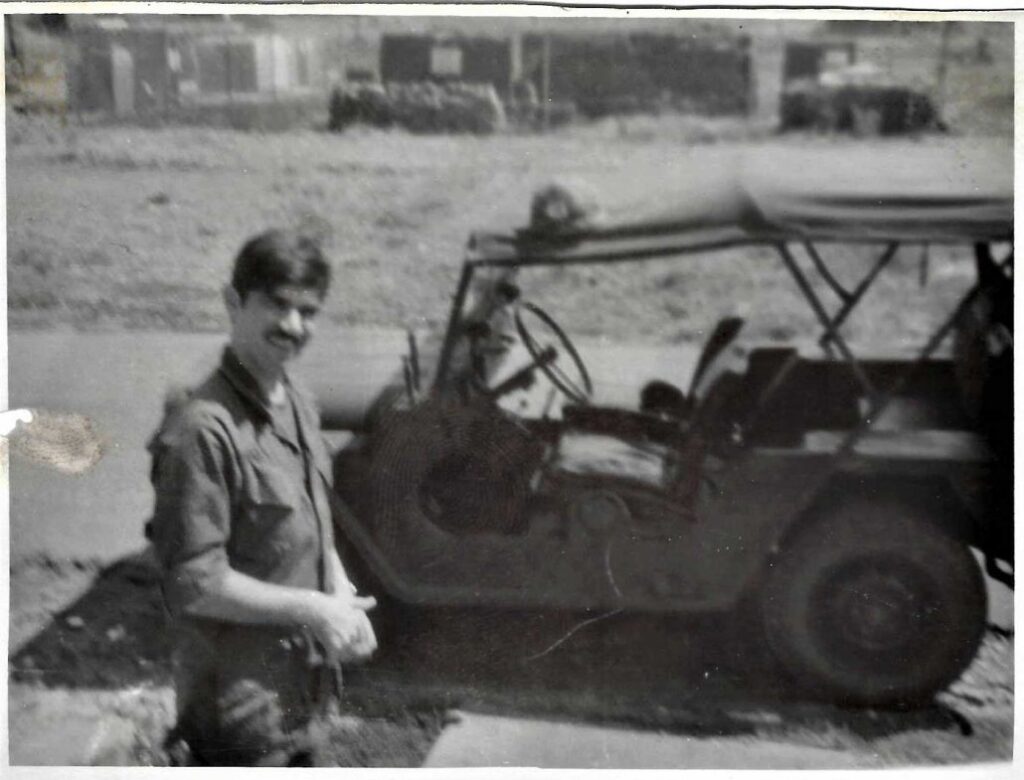 James Donzella worked, for a while, as a colonel’s driver in Pleiku, Vietnam. Photo courtesy of the author.

Somewhere between my 14th and 15th birthdays, my dad taught me to drive a stick shift. He thought it was important that I knew how. My first car was a stick-shift Ford—fast. It earned me several tickets.

A few years later, drafted into the Army, I found myself in Vietnam on route to Da Nang for deployment. Landing at Pleiku Air Base to change planes, I grabbed a seat on a bench and sat to wait for a boarding call. A stranger, Sgt. Fletcher, stopped in front of me and asked where I was headed. I told him. He said no more flights would be departing that day and took me to II Corps headquarters, where I was billeted for the night.

After I stored my gear in the transient barracks, I headed to the mess hall for dinner, then proceeded to the NCO Club for a beer. Sgt. Fletcher was in the club and motioned for me to come to his table. After introductions were made, the conversation turned to my current duty post. Sgt. Lao asked a curious question: Could I drive a stick shift? Lao said the inspector general’s aide transferred back to the States, and the colonel was looking for a replacement to drive his jeep. Sgt. Lao arranged for me to meet the colonel the following morning.

The colonel was in his 40s and had an easy way of talking that made me feel comfortable. I told him my orders were to report to headquarters in Da Nang. He made it clear I didn’t want to be stationed there. And, he told me what the job responsibilities would be if I worked for him. All I needed to do was pass a driving test.

The driving test was simple—I didn’t have to parallel park. In New York, where I was from, the inability to complete that maneuver smoothly meant immediate failure. I was issued a military driver’s license and my orders were changed. James Donzella stands in front of the NCO Club in Pleiku, Vietnam. Photo courtesy of the author.

The following morning, I was assigned to the office of the inspector general, Military Assistance Command, Vietnam, MACV-Team 21.

At 0600 on the dot, I planted my butt in the driver’s seat of the colonel’s jeep. First day as his aide, I wasn’t about to be late. The colonel came from the officer’s mess, approached the driver’s side of the vehicle, stopped when he saw me, smiled, and then climbed in on the passenger side. I started the jeep and we drove out of the compound to the corps headquarters. He didn’t say a word, but I could tell by his expression he was pleased.

As the weeks progressed, I became familiar with the routine. We would talk about our families. Working so closely, I started to anticipate the colonel’s needs. We’d formed a strong bond. The colonel had two daughters. He began to treat me like a son.

At the end of one particular workday, I reminded the colonel that he had scheduled a meeting the next morning, at a nearby camp. We would leave for the camp after the general staff meeting, around 0900.

The following morning at 0900, I drove the colonel to Camp Holloway for his scheduled meeting. While the colonel took care of his business, I stayed with the jeep, smoked a few cigarettes, and read the Stars & Stripes.

After the meeting, we started back to our headquarters. As we approached Holloway’s main gate, I saw a soldier by the guard shack sitting on top of his barracks bag. I slowed down; the colonel told me to stop. The soldier said he had completed his tour and had orders back to the States, but his company commander hadn’t arranged transportation for him to the air base. The soldier’s flight was scheduled to leave in ten minutes. I told the colonel, who was furious, that I thought we could get him to the terminal on time. The colonel told the soldier to climb in the back.

I slammed the jeep into gear and jammed the accelerator to the floor, leaving a patch of rubber as we raced through the gate. I had that jeep up to 55 in no time, racing along Highway 14. A deuce-and-a-half came into view, lumbering slowly along in front of us. On the left side of the truck, two of the double rear tires were missing.

I eased our speeding vehicle barely into the oncoming lane to get a peek of what was heading my way. The lane was clear as I swung out, pedal to the metal. But with two rear tires missing on the truck, it was out of balance. It began to drift into the left lane as we passed it. I jammed my hand on the horn as we hugged the shoulder, the jeep’s left tires barely on the pavement. We were doing 60. I looked over at the colonel, who was holding on for dear life, knuckles glowing white.

I couldn’t make out what the colonel was yelling.

The wind blew in our open vehicle, making it hard to hear things clearly. As I turned the last bend to approach the air base, I could see our passenger’s ride: a C-130 sitting on the tarmac with its props standing still.

As I brought the jeep to a screeching halt in front of the terminal entrance, I noticed the colonel’s face had drained of color. Total trip time? Seven minutes. The soldier tumbled out of the jeep, shaking like a Chihuahua in a snowstorm. He grabbed his bag, slung it over his shoulder, and thanked us as he dashed into the building—one happy GI. James Donzella poses with the jeep he nearly crashed as he tried to get another soldier to an important appointment. Photo courtesy of the author.

I started to pull out of the terminal area, but the colonel told me to stop. He wanted to know where the hell I learned to drive like that. He ordered me not to go any faster than 25 on the way back. I swung the jeep around and headed for headquarters at a leisurely 25.

What a day. Scared the shit out of my boss and didn’t get fired.

Editors Note: This article first appeared on The War Horse, an award-winning nonprofit news organization educating the public on military service. Subscribe to their newsletter.