Last year, in our fall 2021 issue of VBC Magazine, we ran a story on the Navy’s phase-out of the venerable Navy peacoat in favor of the “Black Cold Weather Parka.” We received many responses, including this moving story from Army veteran Dave Lozier. 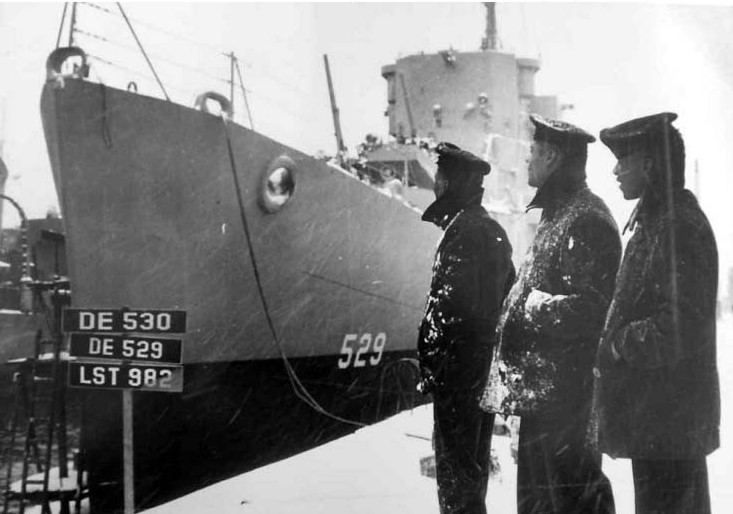 Sailors with the USS Mason (DE-529) in Boston on a cold day in March 1944. The Mason was the first US Navy ship manned by a predominantly African-American crew. (National Archives)

I graduated from a Virginia Junior College in the sum- mer of 1977 and was trying to figure out how to pay for two more years of school. I figured Army ROTC was my best option, me being an Army Brat and comfortable with that life style.

So, in early June 1977, I boarded my first airplane to fly from Richmond to Louisville for ROTC Basic training at Ft. Knox, Kentucky. I was hoping to earn a two-year ROTC scholarship.

My seatmate on the old Piedmont Airlines DC-8 was a salesman from Kentucky. When I told him I was off to Officer Basic he shared his story.

He was in Army ROTC when he graduated from college in 1950. In those years, ROTC graduates went to a short Officer Candidate School after graduating from college and then received their commissions. The new officers would then transfer to their officer specialty school and enter the Army National Guard or Army Reserves.

Twenty-seven Junes previous to our meeting, in June 1950, my new friend had reported to ROTC Summer Camp. There were about 100 in his training company. On June 25th North Korea invaded the South. Just days be- fore, every one of the 100 soon-to-be Lieutenants in his training company had been looking forward to returning to their home-town Armories as transportation, or engineer or supply officers. Suddenly, they were all facing the certainty of being assigned to the Infantry and going to war.

Upon commissioning, they were shipped off to Infantry Officer Basic at Ft. Benning and soon boarded ships to Korea as 2nd Lt. Infantry replacements. That winter, with the Army and Marine Corps in full retreat before the Chinese Red Army, my seatmate found himself standing on the rail of a WWII vintage Liberty Ship off Inchon, pelted by snow and sleet and a Siberian wind that only Korean War veterans can appreciate.

A duffle bag was slung over his shoulder. He and his classmates steeled themselves to climb down a cargo net rope ladder into a landing craft. To call his shivering foreboding “fear” would be an understatement. To make matters worse, the Army had not issued any winter equipment to these new Infantry officers.

The Navy crewmen took off their peacoats and offered them to the Army 2nd Lieutenants out of sympathy. I can’t imagine a more moving gesture of comradeship.

I graduated from a Virginia Junior College in the summer of 1977 and was trying to figure out how to pay for two more years of school. I figured Army ROTC was my best option, me being an Army Brat and comfort- able with that life style.

My friend wore his Navy peacoat for the duration. He told me he was one of only two in his class of over 100 platoon leader replacements who survived that winter. I stepped off the plane with a new-found appreciation for the sacrifice asked of those who volunteer to serve. I earned my scholarship and chose Infantry as my branch. During my own military career, all too often I saw the Army fail to provide proper equipment to its men in a timely manner. However, I also came to appreciate the cost that was likely paid by those sailors who surrendered their peacoats to fellow servicemen going into harm’s way.Those sailors stood watch in the cold and wet without their own peacoats and may have had to pay for new ones. They freely made that sacrifice.

Regardless of branch, we all serve.