Do these spiders ACTUALLY eat camels?

Do these spiders ACTUALLY eat camels? 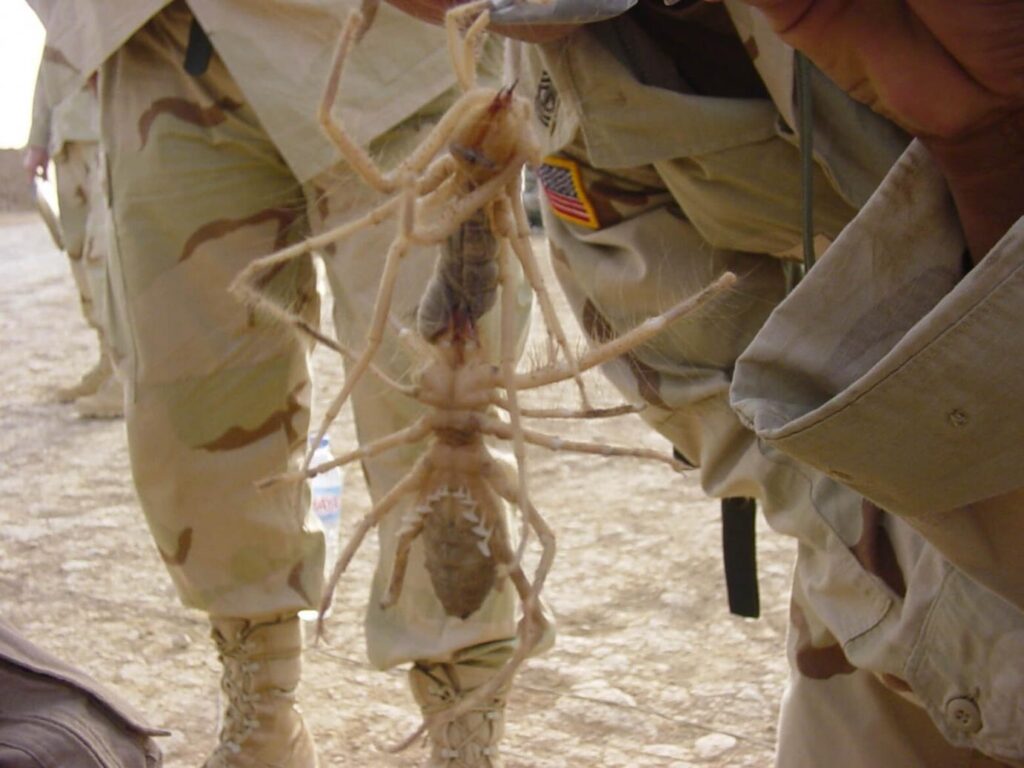 In the early days of the Iraq War—before “google” became a verb and Facebook even existed—the World Wide Web (as we called it then) delivered this creepy-crawly photo to AOL and Yahoo inboxes nationwide. The accompanying email explained how dog-sized Camel Spiders could run 25 miles per hour, jump six feet in the air, and disembowel a camel when hungry. Oh, yeah, and it let out a blood-curdling scream as it chased down occasional humans.

It turned out, the viral Camel Spider photo was an example of “forced perspective”—a photographic technique that makes a close-up object appear larger than it is. Camel Spiders do exist, though they aren’t spiders and don’t eat camels. They’re only six inches long, and their bites aren’t lethal to anything larger than perhaps a small lizard.

Camel Spiders belong to the Arachnid class of invertebrates, but not the spider order. They are members of the smaller and lesser known Solpugid family, which tend in live in dry climates . . . and are hairier and maybe even creepier than related scorpions.

American troops encountered Camel Spiders on their invasion of Iraq in 2003, and they spun a hoax to make solpugids appear as something out of the 1990 hit, Arachnophobia.

Although a solpugid’s bite can be painful to humans, the creatures lack venom glands and are harmless to humans and domestic animals. They’re expert hunters, though their prey are usually termites, as well as other arachnids and insects. As omnivores, Camel Spiders have been known to scavenge road kill and other dead animals. But they don’t generally hunt mammals, and their occasional quiet hissing is a far cry from the war chant of the 300 defending Sparta.

Those of us who suffer from arachnophobia, won’t be calmed to know that solpugids live among us here in the United States, especially in the desert Southwest. If the year 2020 closes in form, we should all soon expect a deadly solpugid plague on the order of the one depicted in the 1975 B-movie classic, The Giant Spider Invasion.

Lucikly, this week on the Scuttlebutt, we’re not talking about this creepy crawler! This week’s episode is all about the Coast Guard. It may be less than one tenth of the size of the US Army, but it’s an important service with missions unlike those of any other branch. Listen to our conversation with Jacob Niehaus and Mike Evanish as we talk about their service with the Coast Guard, what makes this branch unique, and whether all Coasties are good swimmers. Tune in!

This Junior Coastie Accidentally Bought Dinner for the Premier of Greenland—And Earned a Medal by Patricia Kime, Military.com, December 1, 2020 https://www.military.com/daily-news/2020/12/01/junior-coastie-accidentally-bought-dinner-premier-of-greenland-and-earned-medal.html