How Desert Storm Changed Our Language and Culture

How Desert Storm Changed Our Language and Culture 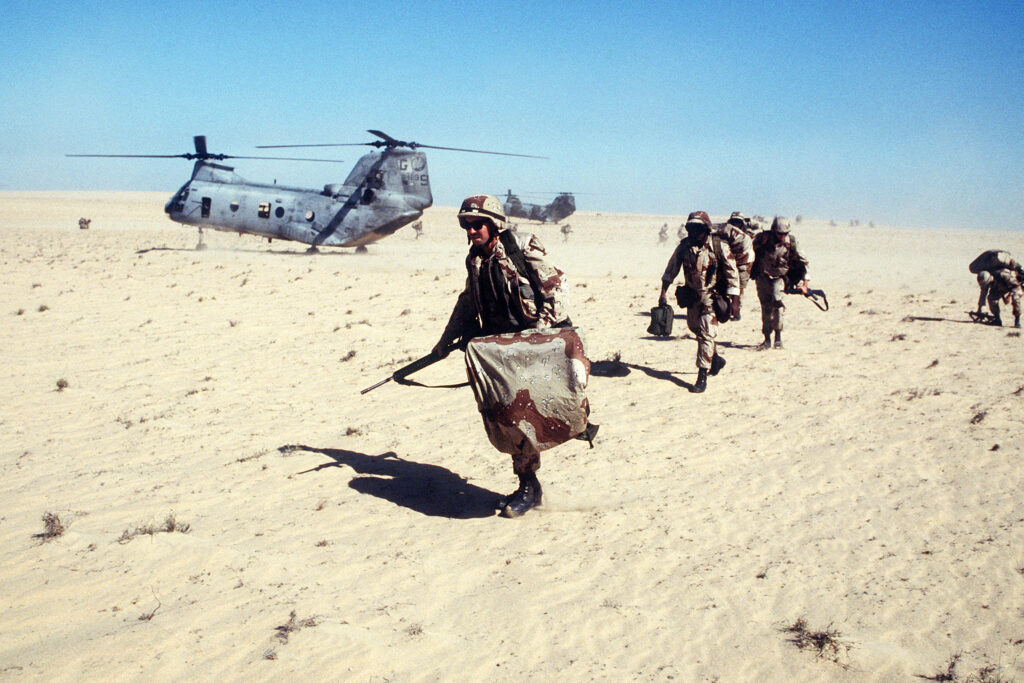 The First Gulf War only had seven months to work on the culture, but it left us with a surprising number of phrases and cultural practices still used today. Here are a few that come to mind:

It was used occasionally earlier, but got a lot of attention in 1991 when Coalition Forces used the phrase to describe the unintentional injuries and deaths of non-combatants as a result of military operations, especially air strikes.

When Desert Storm began, Iraqi dictator Sadaam Hussein promised America “the Mother of All Battles.” “Mother of all” is a common turn of phrase in Arabic to describe the biggest and most prominent of anything. The soundbite caught on in the US, and we still use it to describe anything of great magnitude. The American Dialect Society named it 1991’s Word of the Year.

Precision guided munitions have a long history, but “smart bomb” became a term in 1991 when the USAF used more laser-guided bombs than ever before (still, only about 10% of all ordnance dropped). We now ue “smart” to describe all sorts of internet-connected appliances.

Line in the Sand

The idiom for establishing a limit or boundary of behavior existed, but President George H.W. Bush gave it special prominence when he launched Operation Desert Shield in August 1990: “America and the world drew a line in the sand. We declared that the aggression against Kuwait would not stand.” Bush separately declared, “This shall not stand,” a phrase that also lives on today.

From WWII through the 1970s, the general purpose military vehicle was the jeep. That changed in the 1980s with the introduction of the High Mobility Multipurpose Wheeled Vehicle (HMMWV), the HUMVEE. Most Americans were unfamiliar with Humvees until Desert Shield brought images of them from sandy Saudi Arabia.

Desert Storm featured the F-117 Nighthawk, the first aircraft designed to elude detection. We call this “stealth” technology, and the word achieved new prominence in 1991.

The word “Operation” has long been used to label discrete military campaigns within larger wars, but the wars themselves usually carried broader descriptions. In 1990 and 1991, however, what is sometimes referred to as the “First Gulf War” became known as “Operation Desert Shield” and “Operation Desert Storm,” perhaps in an attempt to minimize the more frightening connotations of “war.”

Not a word, but a practice. I first remember yellow ribbons during the Iran Hostage Crisis of 1979, but the widespread use of yellow ribbons to signal support for the troops overseas came in the fall of 1990. The symbolism of yellow ribbons and war go back, it seems, to the 1600s in England. WWI inspired a popular marching song, “Round Her Neck She Wears a Yeller Ribbon” (For Her Lover Who Is Far, Far Away). In the 1970s, “Tie a Yellow Ribbon Round the Ole Oak Tree” became a hit for Tony Orlando and Dawn. Today, an elaborate vexillology defines ribbon colors for dozens of specific cancer awareness campaigns.
VBC2021-02-08T18:17:34-05:00