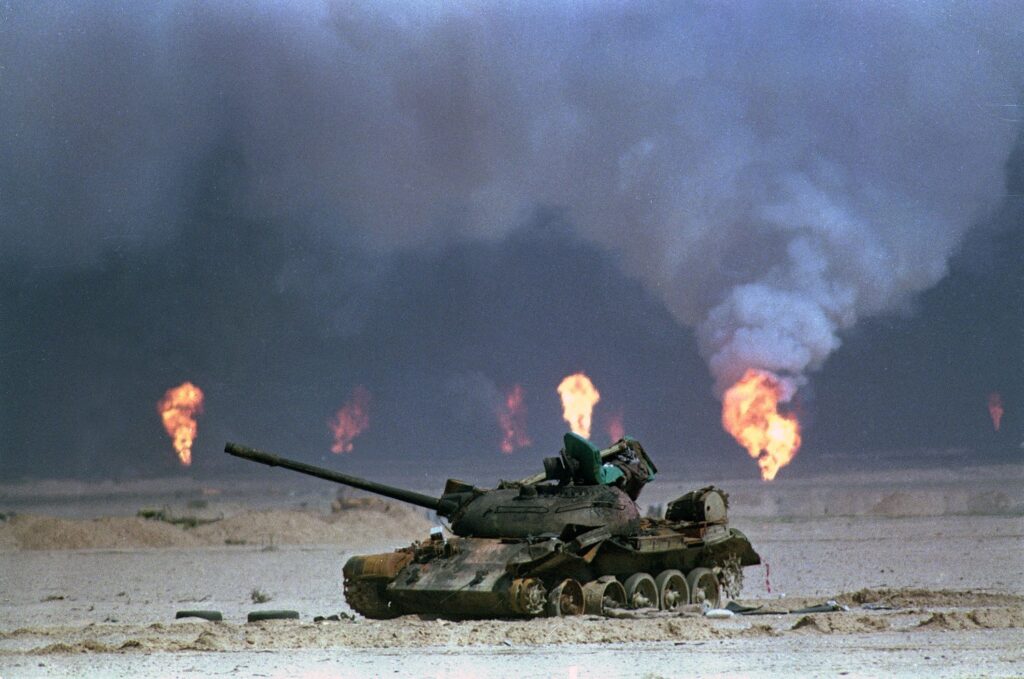 From The Atlantic: A destroyed Iraqi tank rests near a series of oil-well fires during the Gulf War, on March 9, 1991, in northern Kuwait. David Longstreath / AP

For the ongoing 30th anniversary of Operation Desert Storm, we share this great photo essay first published in 2016.

Overshadowed by Vietnam on the one hand and Operation Iraqi Freedom on the other, Desert Storm was the first battleground testing the “New World Order” that many hoped would replace the bipolar globe of the Cold War.

The war began on January 16, 1991 with a US-led coalition of 39 countries determined to evict Iraq from neighboring Kuwait, which Iraq had invaded the previous August. The US had spent months in diplomatic talks with Iraq’s leader Sadaam Hussein in the hopes of winning a peaceful withdrawal. At the same time, the coalition assembled close to 1 million troops on the Iraqi border in case force was needed. Sadaam didn’t budge, triggering a five-week air campaign followed by five day ground assault. The war ended abruptly on February 28 with Sadaam still in power but Kuwait liberated. The war coalition was supposed to model a “New World Order” that would be erected in the stand-down of Cold War forces around the world. President George H.W. Bush and British Prime Minister Margaret Thatcher especially pressed for such a vision, which was one that reached back to Woodrow Wilson’s “Fourteen Points.”. The New Order never took hold, and its future remains in doubt. Both Stars and Stripes and the foreign policy and national security opinion site War on the Rocks have excellent short articles on the First Gulf War’s legacy.