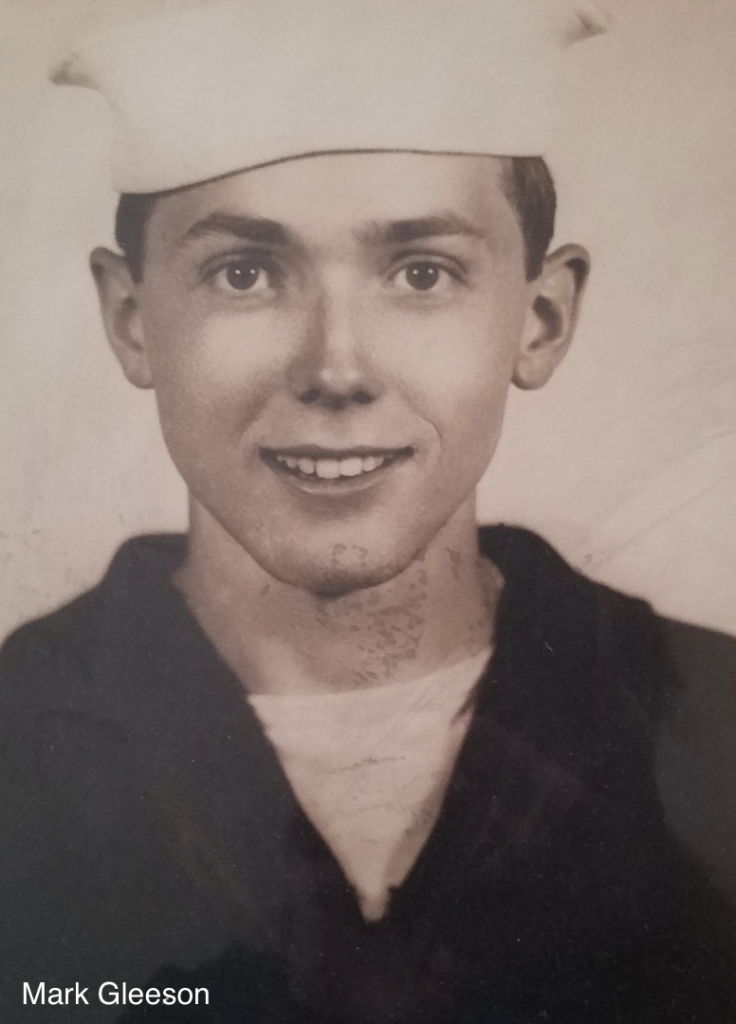 Many thanks to WWII Merchant Marine veteran Mark Gleeson for submitting this story about an embarrassing incident in Boot Camp.

She was also a prolific writer of notes in beautiful Palmer method script. She wrote lots of thank you notes, of course. But she also wrote notes to people who sent her thank you notes, thanking them for thanking her.

In 1945, I enlisted in the Merchant Marine and shipped out from Pittsburgh to the U.S. Maritime Service Training Station at Sheepshead Bay in Brooklyn. My parents drove me to Pennsylvania Station on the evening of my departure, just as they had driven my two older brother when they joined the Army.

As I climbed aboard the train, my father, a highly decorated World War I veteran of the 2nd Infantry Division, smiled and waved. “Good luck!” he said. My mother gave me a hug and a small address book full of names and addresses. Her last words to me were: “Don’t forget to write.”

Training life at Sheepshead Bay was a repetitive routine of classwork and physical training to prepare for life at sea. We took swimming and jumped off a 15 foot tower for our abandon ship drill. Classes were an hour long, after which we moved to the next subject in another classroom.

During the fourth week of training, a female staff member at the Training Center came to the classroom door. Our instructor talked with the woman and then motioned me into the hallway.

“Go to the Chaplain’s Office,” the woman instructed me.

“Is there a problem?” I asked.

“It has something to do with home,” she said vaguely.

Fear gripped me. Something bad must have happened. My father came through the First World War with hearing loss from the artillery, and also a bad stomach from poison gas attacks. He had almost died a few years before with a bleeding ulcer. My oldest brother was on an Army attack transport in the Pacific. My second oldest was an infantry officer preparing the invasion of Japan. People aren’t called to the Chaplain in the middle of the morning unless there is bad news waiting.

The Chaplain was an older officer, gold stripes on the sleeves and rows of ribbons.  He was tall, pleasant looking, grey hair.  He shook my hand and asked me to sit down.

The Chaplain said he had had a call from my mother. “How in the world had she found him?” I wondered. He paused, looked at me, and tried to keep a straight face.

“Your mother is upset as you have not written to her in the four weeks you have been here. What is going on?”

I thought I would die of embarrassment. The Chaplain smiled, said something about how mothers worry, and told me to take care of it. He said he didn’t want to see me about this issue again.

I returned to my class, which had moved to the next subject. Everyone looked at me expecting something bad. I could detect sorrow in the faces of my close friends. When class ended, I told everyone that my mother had needed some information from me right away. I said she didn’t have time to write and that’s why she called the Chaplain.  Just a little lie, but it seemed to work. I saved face.

Needless to say, I wrote home immediately and did so faithfully afterward.