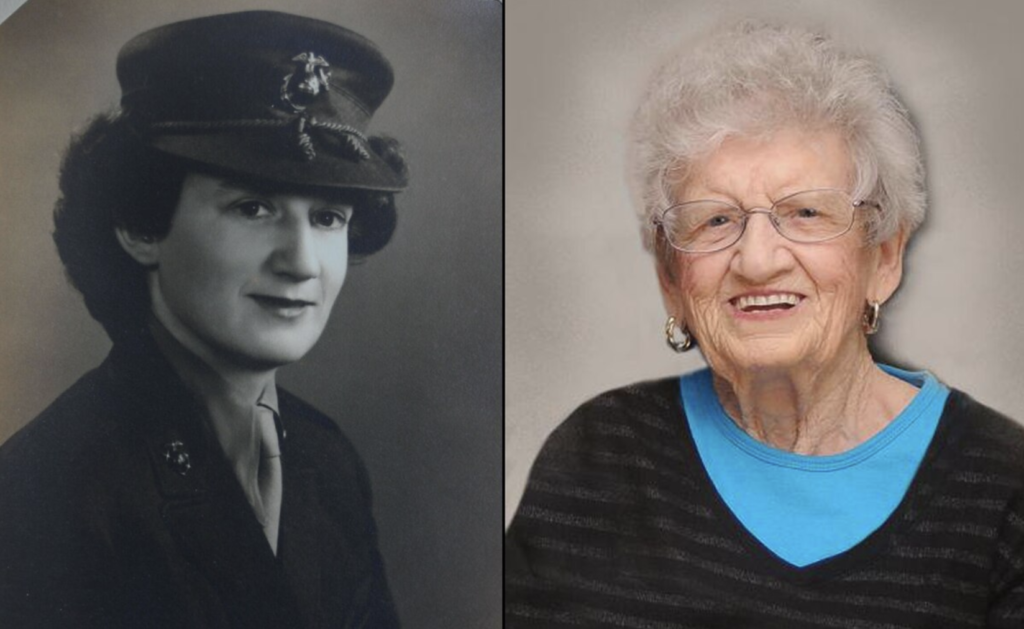 Image from the Marine Corps Times.

Dorothy “Dot” Schmidt Cole died on January 7 in her North Carolina home at age 107. She was the United States’ oldest living Marine.

Her nickname growing up on the edge of the Allegheny National Forest in northwestern Pennsylvania was “Half-Pint” because she stood only 4’11” tall, fully grown. Shortly after Pearl Harbor in December 1941, she boarded a bus for Pittsburgh, where she tried to join the Navy. They told her she was too short.

Undeterred, she returned home and took up flying lessons. She thought she could serve as a pilot in the war. But, with the exception of the 1,078 WASPs who ferried airplanes stateside for a brief time, the US military didn’t allow female pilots.

Having logged over 200 hours in the air by 1943, Dot joined the Marine Corps Women’s Reserve still hoping she might fly. “They put me behind a typewriter instead of an airplane,” she explained in an interview with the Marine Corps Times last year. She spent the war typing correspondence for officers at Quantico.

Along with the other branches of service, the Marine Corps opened their ranks to women during WWII because of the severe manpower shortage. The idea was to have women served in administrative, clerical, and technical positions to free men up for combat. That made women in uniform mighty unpopular among the male clerks in the rear echelons that were reassigned to fight overseas.

“We were not welcomed too well by many of the men in the service,” Dot explained. “But they got over it.”

To soften the blow of women joining the ranks, the branches of service gave these all-female units cute nicknames. The Army had the WAACs (Women’s Army Auxiliary Corps, later shortened to WAC). The Navy had the WAVES (Women Accepted for Volunteer Emergency Service). The Coast Guard had the SPARS (Semper Paratus, Always Ready).

What did the Marine Corps call their female Marines?

Some were tempted to call them “Marinettes,” a nickname popular during WWI, but one that never sat well with a branch of service that demands intense fidelity to group identity.

So, in 1943, the Commandant of the Marine Corps, Lt. Gen. Thomas Holcomb, let the word go forth that the 20,000 members of the Marine Corps Women’s Reserve would not be given any nickname. “They are Marines,” he explained. “They don’t have a nickname and they don’t need one. They get their basic training in a Marine atmosphere at a Marine post. They inherit the traditions of Marines. They are Marines.”

The USMC posted a simple, beautiful, and dignified tweet to mark Dot’s passing. It ended with “Semper Fi, Marine.”

Join us in saying goodbye to Sgt. Dorothy (Schmidt) Cole who passed away last week as the oldest living Marine.