I Saw First-Hand Why They Called General Schwarzkopf “Stormin’ Norman”

I Saw First-Hand Why They Called General Schwarzkopf “Stormin’ Norman” 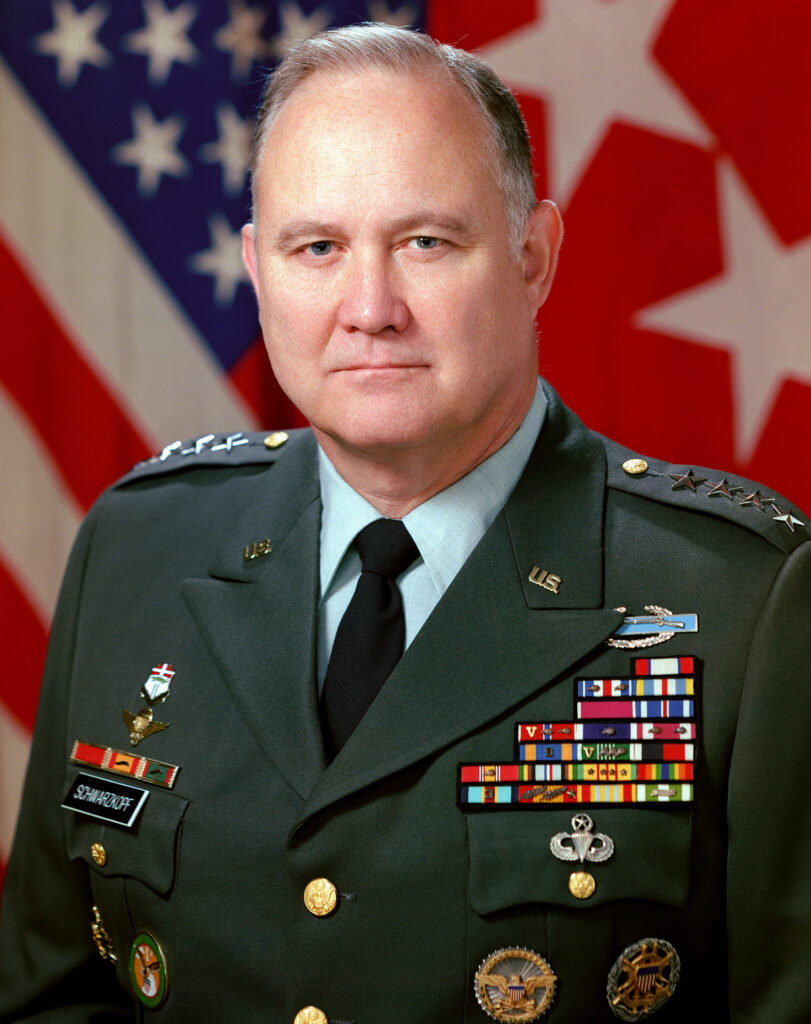 Bright Star 89 was the dress rehearsal for Desert Storm conducted in the Oman desert in the summer of 1989. I was the operations officer for 3rd Bn, 7th Marines, 1st Marine Division. As a major, I was a small part of a huge exercise testing our ability to airlift forces to the Middle East and marry them up with the equipment we needed.  All this had to be done while working with other US service branches, like the Army, and our coalition partners, like the British.

We arrived in Oman, received our vehicles and heavy equipment, and moved to the field. Our orders were to occupy and defend a position with elements of the 82nd Airborne Division on our flank.

After setting up our defenses and establishing a command post (CP), we received a radio message that an Army VIP was on his way—we weren’t clear on his name—General Schwarz… something.

Our CP was a beehive. We didn’t have time to entertain a VIP. We saw his visit mostly as an annoyance.

The VIP arrived by helicopter without much of an entourage, if any. The first thing that struck me was his size. He was a bear of a man with a commanding presence, not only in stature but also his laser focus on the situation. He greeted us casually and strolled toward our CP.

This newly assigned Commander in Chief of the U.S. Central Command, responsible for the entire Middle East theater of operations, took a seat on an MRE box shaded by a canopy of camouflage netting.

I briefed him on our situation and defensive positions, using a topographical map with overlays. He nodded his head in approval of our shrewd use of the slight variances in desert elevations and depressions and our dispersion across the open terrain. I immediately recognized that this general was a seasoned, no-nonsense field commander who knew his business.

After a quick tour of our lines, he asked for a Humvee ride to the 82nd Airborne Division’s position. I accompanied him.

As we approached the Army’s CP, I learned why they called the general “Stormin Norman.” His temper flashed when he saw with the poor positioning of the 82nd Airborne’s units and minced no words about it when he was greeted by the Army leaders. That one-way conversation was our cue to exit as fast as possible and return to our position. I took quiet satisfaction in having done our job right.

I had the opportunity to meet General Schwarzkopf again in 1995 when he came to Headquarters, U.S. Special Operations Command, in Tampa, Florida, to receive briefings. I happened to have on hand his autobiography, It Doesn’t Take A Hero, which he graciously signed while thanking me for my service during Desert Storm. The book is a remarkable story of untiring devotion to duty, honor and country and remains a treasured memento of my military career.

I’m still struck by the truth and humility of his quote that inspired the title of his memoir: “It doesn’t take a hero to order men into battle. It takes a hero to be one of those men who goes into battle.”

General Schwarzkopf passed away in 2012 at the age of 78. He was a great general and leader, and I was lucky to have met him. His top 10 quotes on war and leadership are worth reviewing by anyone interested in either.