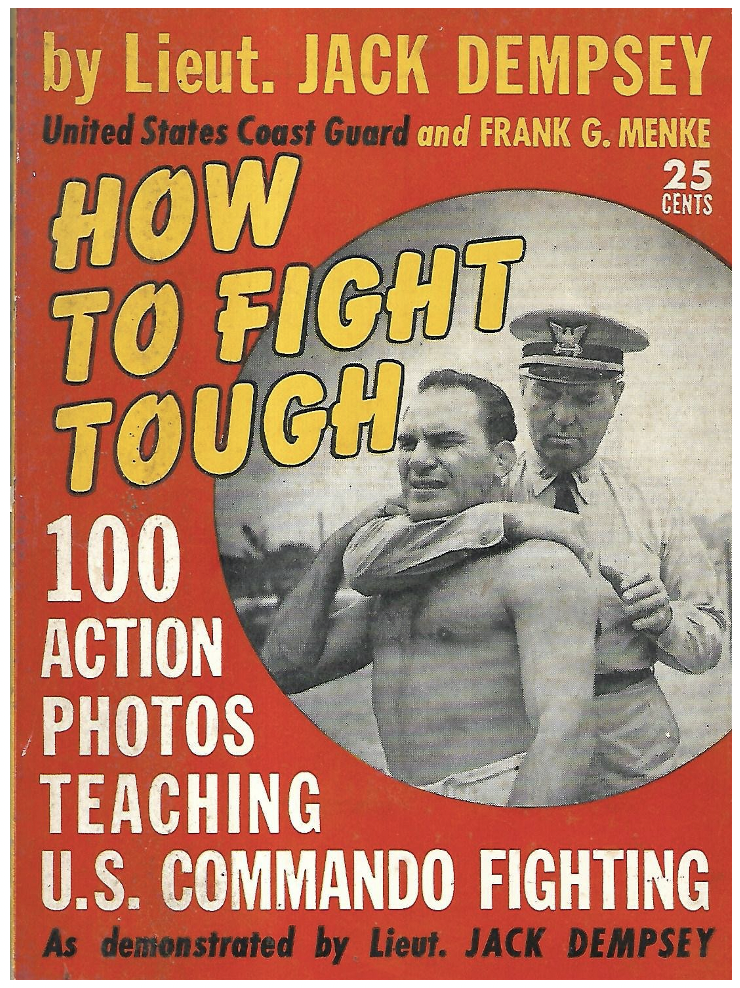 Several years ago, WWII veteran George Herwig told a story at the Veterans Breakfast Club about turning out for physical training in 1943 at the Coast Guard Training Station in Brooklyn. Stepping forward to lead the men was a burly “old guy,” a lieutenant, by the name of William Harrison “Jack” Dempsey, the former world heavyweight boxing champion. Dempsey outpaced recruits less than half his age and enjoyed challenging anyone to a bout of hand-to-hand combat.

George had no idea that Lt. Jack Dempsey was on a mission to redeem his reputation from a scandal that had haunted him since World War I.

When the United States entered The Great War in 1917, Jack Dempsey was little more than a hobo who fought occasional boxing matches. Along with millions of other men, Dempsey registered with the “Selective Service,” the government clearinghouse for enlisting manpower into the military. Dempsey requested exemption from the Draft, claiming truthfully that he supported his mother, wife, and an invalid sibling. Dempsey got his exemption, kept boxing, and rose in the ranks of heavyweights. 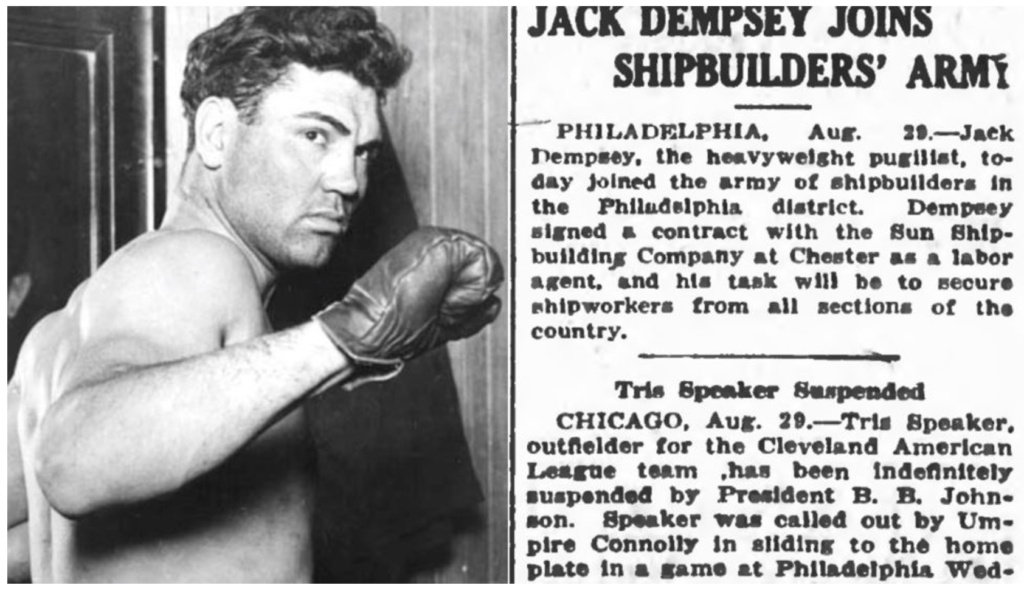 Dempsey’s prowess in the ring caught the attention of promoter Jack “Doc” Kearns. As Dempsey’s manager, Kearns knew that publicity was essential to getting his client a title bout. In 1918, with the nation caught up in war fever, Dempsey dropped by the Sun Shipbuilding Company’s yard near Philadelphia and had some photographs taken with workers. The boxer had only helped recruit labor for the shipyard, but the photos suggested that Dempsey actually worked there as well. 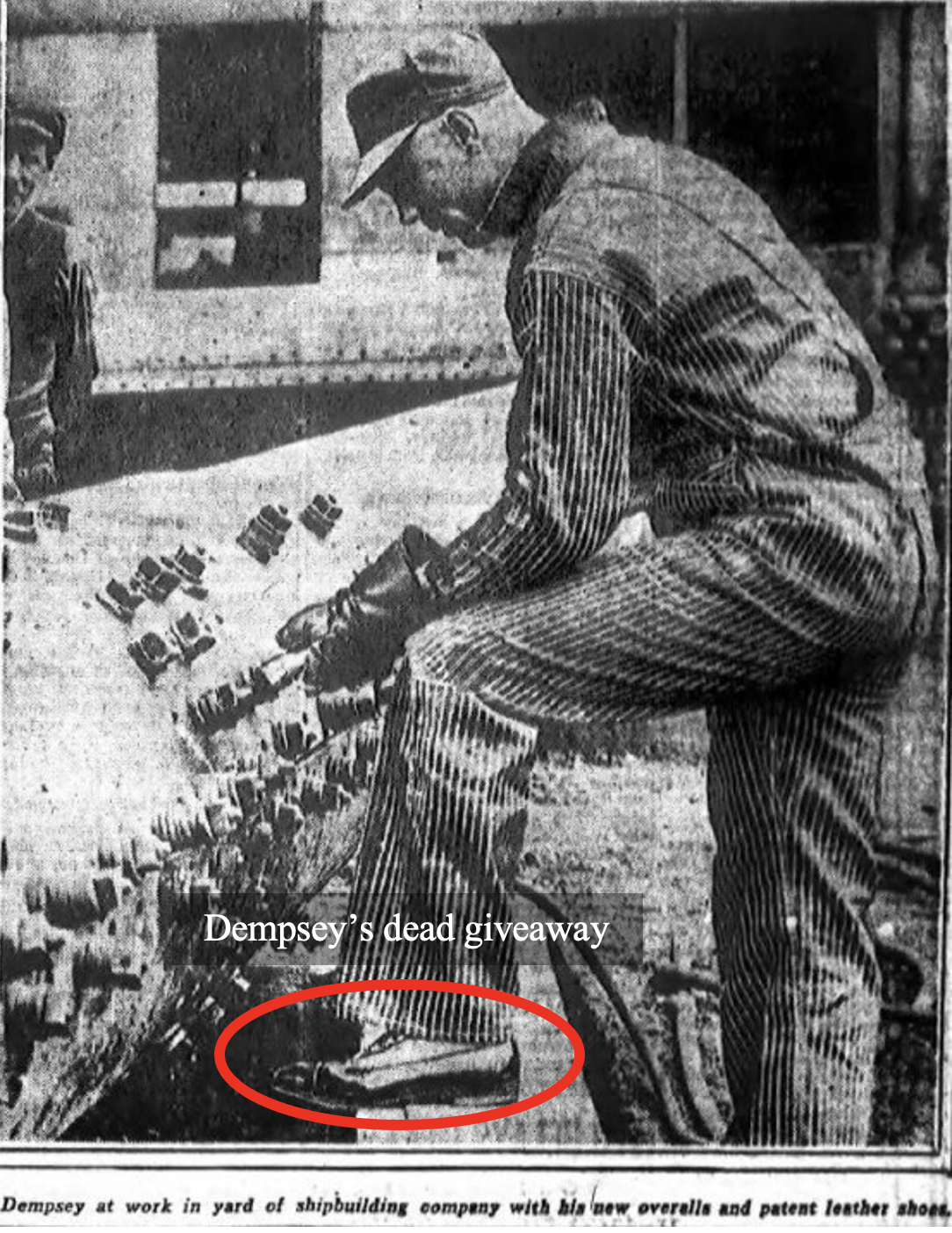 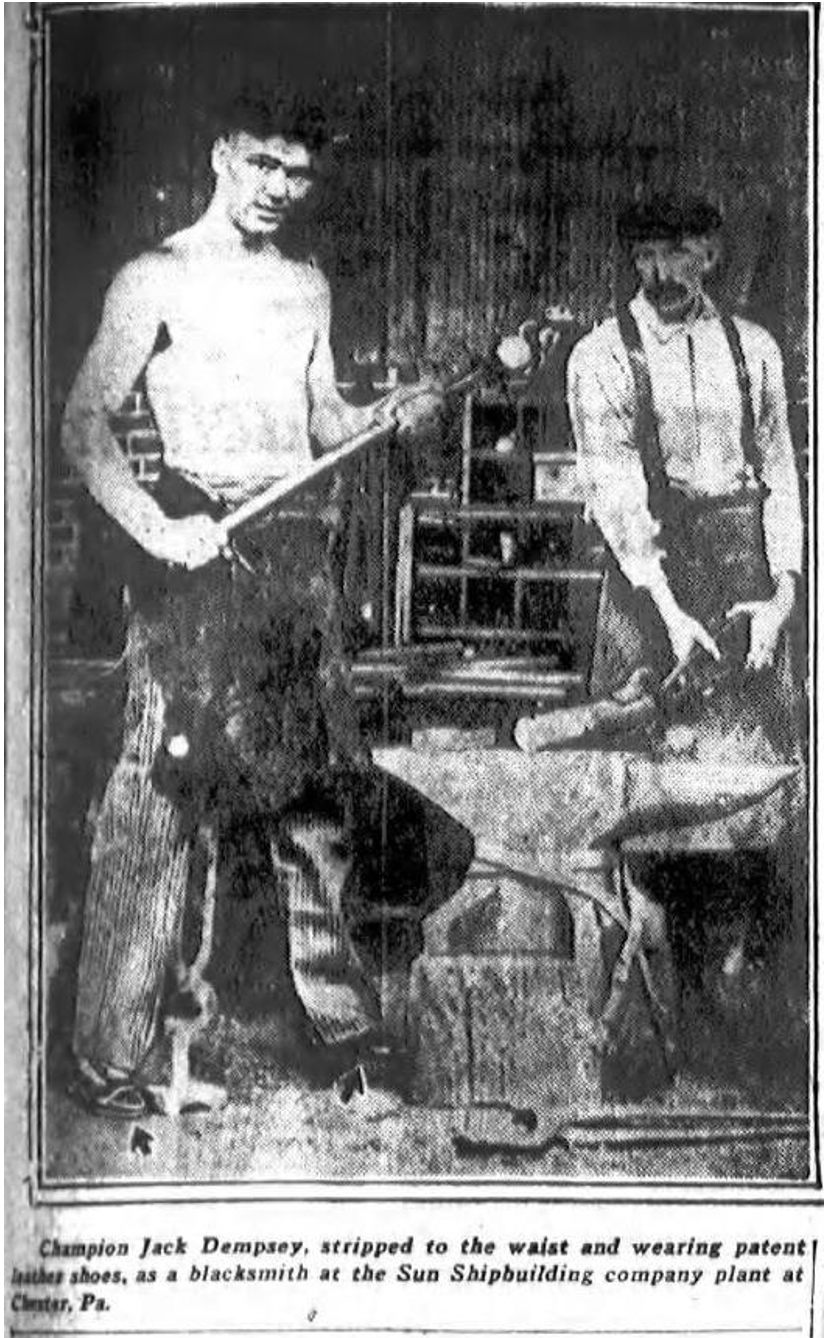 The photos circulated locally only, and any stir they caused died quickly. Dempsey wasn’t yet famous enough for a full-blown scandal.

That would change a year-and-a-half later when, as reigning heavyweight champion, Dempsey was accused by federal prosecutors of having given false information on his Selective Service questionnaire back in 1917. The government’s prime witness was Dempsey’s ex-wife Maxine, a prostitute 16 years Dempsey’s senior, who claimed the fighter hadn’t supported her at all during the war. The old shipyard photos re-surfaced, bolstering the state’s case and earning Dempsey the scorn of the American public.

Dempsey won the 1920 court battle, but the labels “Draft Dodger” and “Slacker” stuck to him like burrs. The American Legion denounced him. Crowds booed him in the ring against French contender and war hero Georges Carpentier. The press beat upon him relentlessly, questioning Dempsey’s patriotism and manhood. The nation’s leading sportswriter, Grantland Rice, declared “Dempsey is the champion boxer, but not the champion fighter.” He continued: “It would be an insult to every young American who sleeps today from Flanders to Lorraine, from the Somme to the Argonne, to crown him with any laurels built of fighting courage.” 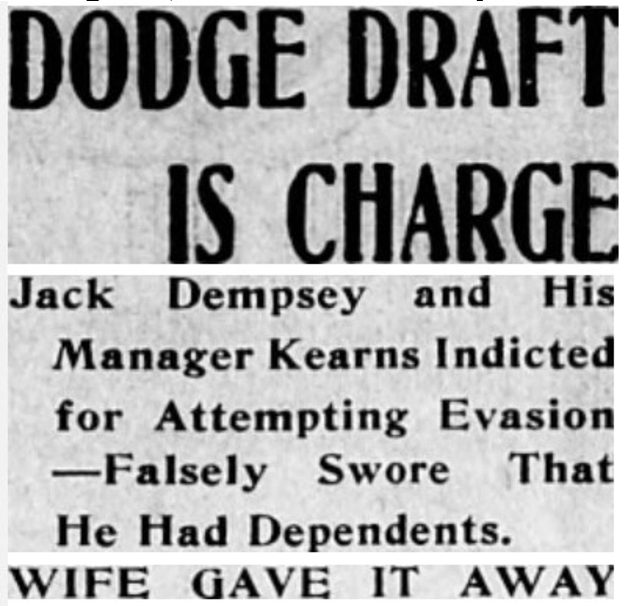 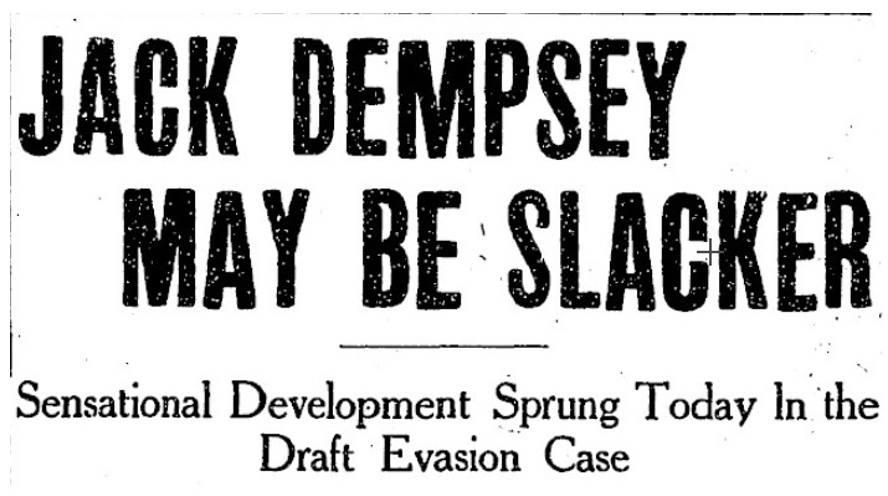 But the accusations wounded Dempsey deeply, and he labored to restore his reputation. “It never will be over, in my own heart,” Dempsey would later say. Many war veterans cheered when “The Fighting Marine,” Gene Tunney, won the crown by decision over Dempsey in 1926. 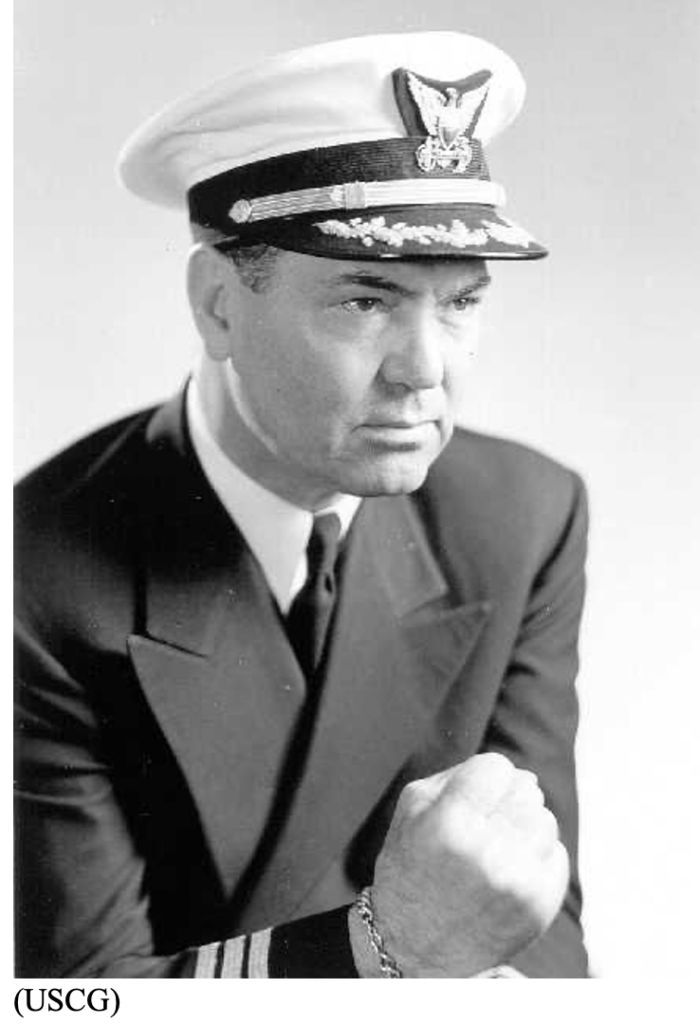 Fifteen years after his retirement from boxing, Dempsey got a shot at redemption. After the attack on Pearl Harbor, the 47-year-old joined the New York National Guard, then was offered a commission in the Coast Guard. He reported for duty at the Manhattan Beach Training Station as the “Director of Physical Education.” Dempsey soon learned his job was mainly in publicity, making celebrity appearances at camps, hospitals, and War Bond drives. In 1944, now a Commander, Dempsey was assigned to Public Affairs duty aboard the transport USS Wakefield, entertaining troops destined for combat in Europe.

Dempsey insisted on getting a shot of combat himself. In 1945, he won assignment to the attack transport USS Arthur Middleton for the invasion of Okinawa. 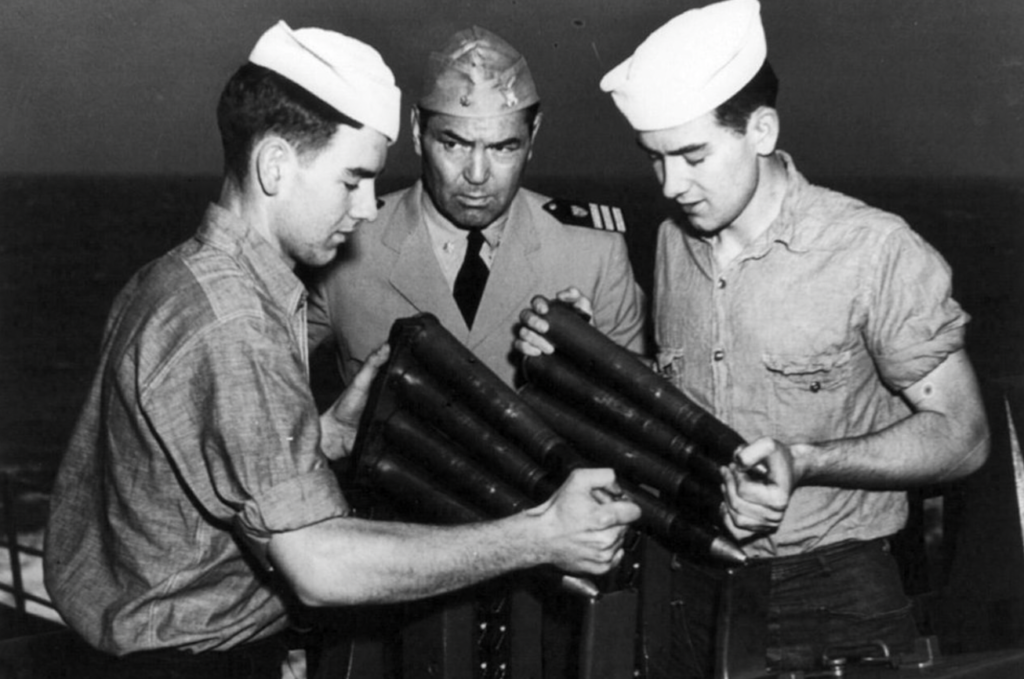 Cmdr. Dempsey looks on as two Coast Guardsmen load an antiaircraft gun in the Pacific theater in 1944 (Library of Congress)

According to Dempsey’s friend and biographer, Roger Kahn, Dempsey climbed aboard an assault boat on April 1, 1945, to land ashore with the first day’s waves. An officer said to Dempsey, “You stay here with me, Jack. We can’t afford to lose you.” Dempsey countered, “Sir, I trained with those boys and they look up to me. I go where they go.”

Jack Dempsey was one of the oldest servicemembers to land on Okinawa that day.

In his postwar years as a fixture in Jack Dempsey’s Broadway Restaurant in Times Square, the old pugilist would sometimes greet diners who asked him about his war record. We would reply: