Simon Ramos came into this world in 1932, one of twelve siblings. His childhood playground, all 566,000 acres of it, was the Y.O. Ranch on the fringes of Kerrville, TX. He recalled, “My dad was from Mexico and worked the Y.O. Ranch as a cowhand. I rode a small horse and helped on the cattle drives when I could. That was exciting for a kid.” 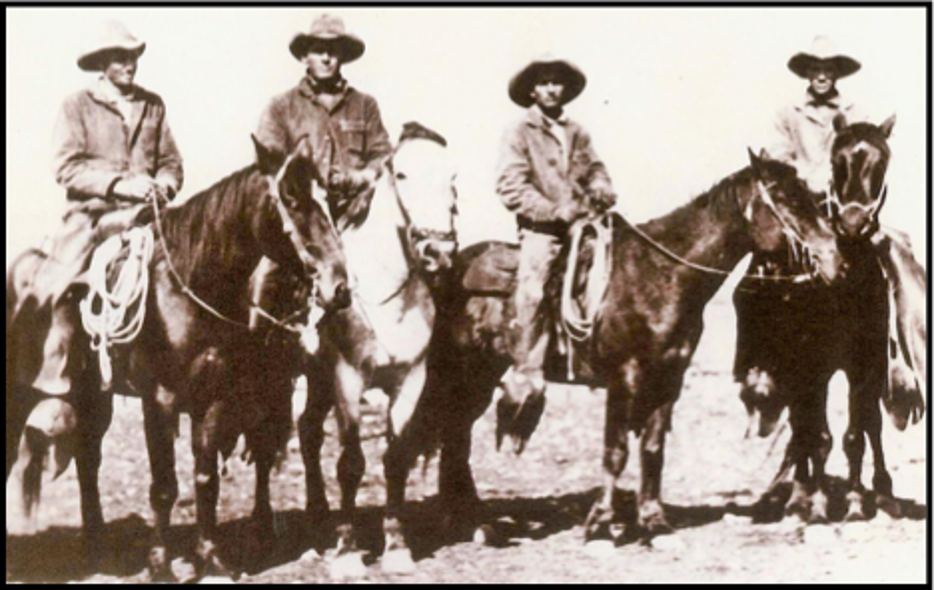 “We were all in a state of shock. We knew a war had come to America. Two of my brothers enlisted. One served with the 101st Airborne and survived the heroic stand at Bastogne; the other brother fought across Africa in Patton’s armored division. We were all happy when the war was over.”

Both of Ramos’ brothers made it home.

Tragedy struck the Ramos family in 1947.

“My father passed away. My brother, Joe, quit the 10th grade and I dropped out of the 9th grade so we could work to support the family. I worked construction. In 1952, I decided to join the Army. My brother said, ‘Simon, you will be getting up at 4:00am and humping a backpack.’ Shoot, I told Joe that I was getting up at 4:00am anyway and lugging around a 65 pound jackhammer. What the heck was the difference?”

“We weren’t issued clothes right away so I pulled KP in a brown suit. A guy had weekend liberty and asked to borrow my suit. I said, ‘sure.’ Never saw that brown suit again. But I figured it this way, the incident reminded me of Saint Martin, a Roman soldier, who gave half his coat to a beggar. Later in a vision, Sanctus Martinus Turonesis believed that beggar to be Jesus Christ. A Christian, Saint Martin put an end to his military profession and later became a Bishop. I loved reading the Bible at night.”

A deep-seated Catholic faith would serve Simon Ramos well during his 35 years as an American soldier.

“After Fort Riley I volunteered for jump school. That meant Fort Benning.”

Asked if jumping out of an airplane was a bit nerve-wracking, Ramos replied, “To tell you the truth I was too young and too damn dumb to be scared. I enjoyed it.” 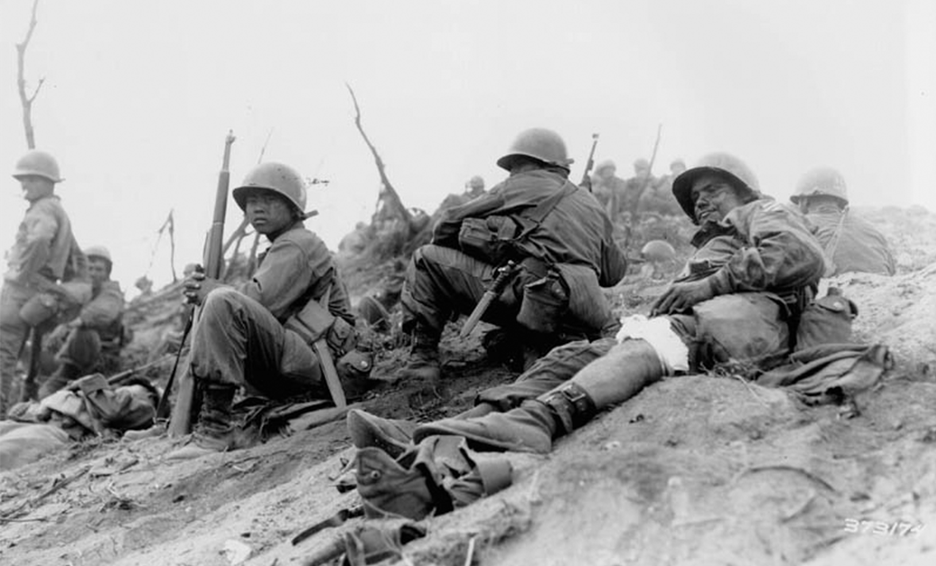 First dispatched to Okinawa, within a month, Ramos was fighting for his life with the 7th Infantry Division in the Korea War. Patrolling the bleak vicinities of Old Baldy and Pork Chop Hill, young Simon Ramos ended up participating in the horrific Battle of Pork Chop Hill in April, 1953.

“We had men up there, plus a company of Colombians. When we left the hill to regroup, the North Koreans and Chinese came in and caught the Colombians asleep. The Colombians were wiped out to the man.”

Sent back to retake Pork Chop Hill, of the 207 soldiers with Ramos only 87 survived.

“We simply could not retake Pork Chop Hill and were at long last pulled back,” he said. Ramos was wounded by shrapnel during the fighting. “I wasn’t worried about those wounds,” he stated. “But they sent me back to receive medical aid for about 3 or 4 days before I could rejoin my unit.”

Within the year, Ramos was promoted from Private First Class to Corporal to Sergeant to Staff Sergeant and finally to Sergeant 1st Class.

“One of my buddies stationed in Japan asked me how in the world I made rank so fast. Well, I told him the truth….if you survived, you got promoted. It’s that simple.”

After surviving Korea, E-6 Ramos was ordered to Fort Bragg as an assistant platoon leader. He recalled, “I didn’t know diddly- squat about garrison duty (training and normal day to day activity). Sgt. Green and Sgt. Clark became the wind beneath my wings. They gave me umpteen field manuals and training manuals to study, so I studied real hard. You know, I could lead men in combat but garrison was entirely different.

I remember Sgt. Clark telling me, ‘Get a clipboard, put some paper on it, scribble something on the paper, then go outside and walk really fast to wherever you’re going. Nobody will bother you.’ Well, guess what, it worked!” 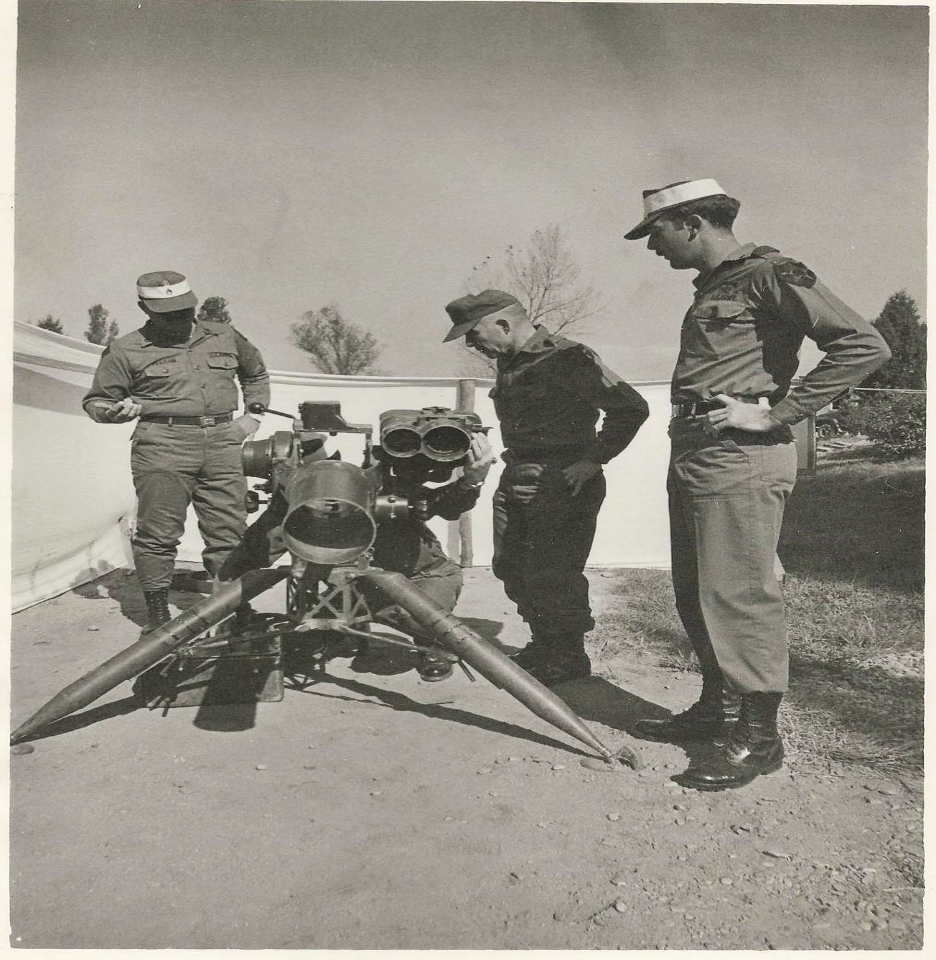 Fort Bragg became the home base to Ramos during most of his Army career.

“I joined the Special Forces in 1957. That was before President Kennedy authorized the legendary Green Beret for Special Forces.”

Asked if the training was particularly tough, Ramos replied, “No, not if you know conventional tactics. When you train indigenous personnel you train them in tactics. Our own training included work as infantrymen, engineers, intelligence, heavy weapons…you master all the MOS codes (military occupational specialties). Back then it took a soldier 3 to 5 years to earn the unit insignia on his beret.”

The Special Forces always kept a ‘rucksack’ jam-packed with essentials for quick deployment.

“I went in one morning and was asked, ‘Is your rucksack ready?’ I answered, ‘Of course it is.’ The reply was, ‘Good, you’re going to Laos today.’ That was in the early 60s when Southeast Asia was heating up for a major conflict. I was there about 6 months way out in the boonies training the indigenous Meo tribesmen to fight the Communist Pathet Lao. Truthfully, I didn’t like the training schedule. It takes about 6 months for these people to start trusting you then all of a sudden you’re pulled out to be replaced by an unfamiliar, inexperienced unit. The Laotians had been at war for several years, so ‘trust’ meant everything to them.”

Sent home for a 30 day leave, within the first 2 weeks Ramos was again asked, ‘Is your rucksack packed?’ He recalled, “I thought ‘Oh, hell, now where to?’ Well, the where was Vietnam, specifically Cu Chi. I trained Vietnamese Rangers. Again, a big trust factor. They liked me because I was a senior NCO, been at war, fought major battles, and had almost 18 years in the military. Their first questions were, ‘How many years have you served, how many jumps have you made, and how many wars have you fought?’ A big trust factor, experience counted.” 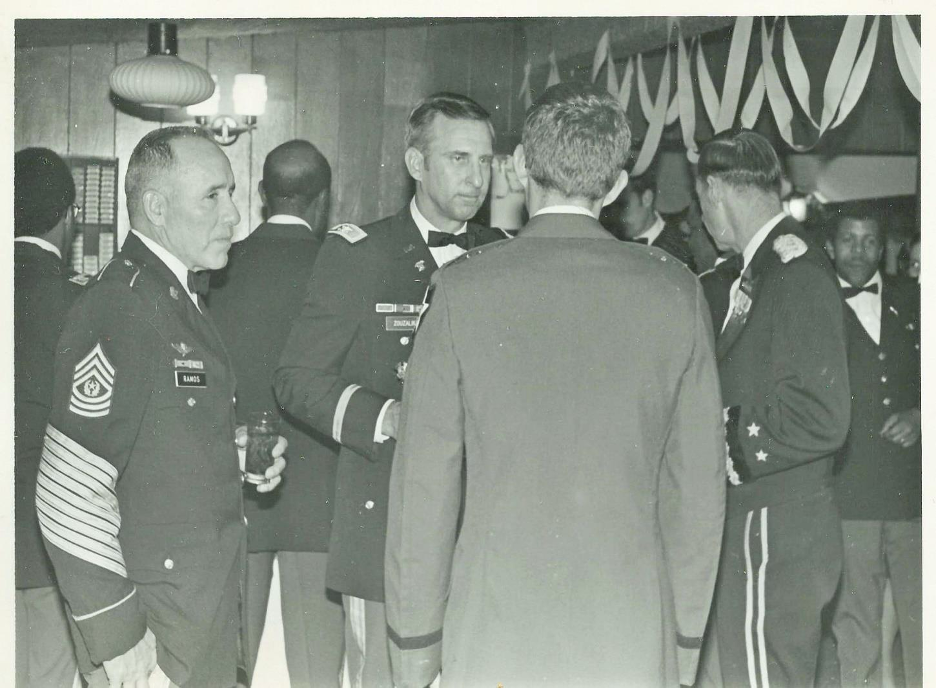 The Vietnamese would comment concerning their training, ‘This is not the way the French taught us.’ To which Ramos replied, “Well, we are not the French. This is a new era, and a new way to fight.” Tactics are useless unless performed properly. Ramos said, “We were on a patrol when a female Vietnamese with a bicycle attempted to pass us on the road. The Vietnamese commander wanted to detain her, but Captain Moore, the American Captain, said, ‘She’s not hurting anyone, let her through.’ Well, she was the one that alerted the village up ahead. We got into a hell of a firefight. Shrapnel from a grenade severed the radial nerve in my left arm and went all the way through.”

Evacuated to Tan Son Nhut for medical treatment, Ramos saw a doctor who remarked how lucky Ramos had been.

“The doctor said the shrapnel barely missed the artery that touches the radial nerve. Had that artery been severed, I would have bled out.” (Ramos served a second tour in Vietnam in the late 60’s).

Ramos lost the use of his left hand for a long period. After recuperating at Walter Reed Hospital he was sent back to Fort Bragg as an instructor. Having studied Arabic, Ramos was assigned to the 6th Special Forces yet never deployed to the Middle East.

His study of Portuguese, however, played a big part in his next port-of-call: Panama. He recalled, “Since I understood Portuguese, I was assigned to train Brazilian soldiers since they spoke the language. I also went to Chili and Colombia on various assignments.”

Ramos made Command Sergeant Major in 1979. In 1982, 30 years after leaving Korea he was sent back to Camp Casey near the DMZ separating North and South Korea. He said, “I moved around a lot checking on the training of certain units, working with the soldiers instead of brigade sergeants. I never told the brigade sergeants I was coming….that sort of gave them a major peeved factor.” 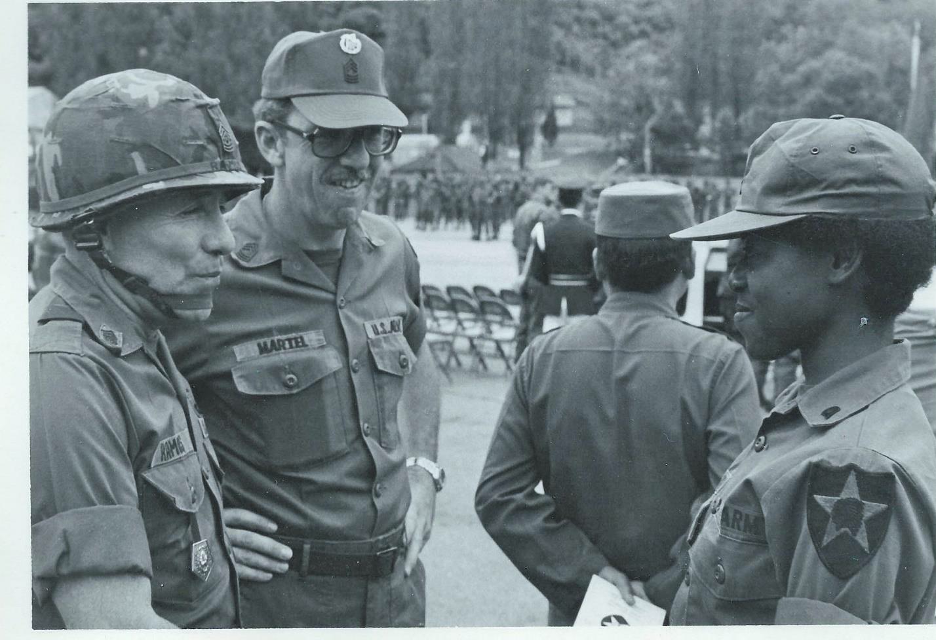 Ramos, left, at change of position ceremony in Korea

“One of my drivers was a young Pfc. and I told him once that I didn’t really like the job I was assigned to do in Korea. He said something that stuck with me for the rest of my life, ‘Sergeant Major, it doesn’t matter how high you get, it’s how low you’re willing to reach.’ That’s pretty good logic from a young kid.”

In 1987, Command Sergeant Major Simon Ramos retired from the US Army after serving his country for 35 years. Why 35 years?

“People ask me that all the time. I stayed because you can influence more by staying in than you can from the outside.”

“Army life was good to me. My wife Emily and I had a long discussion before we got married. We knew there would be times I’d be gone for months and she accepted my commitment to my job. That was 64 years ago, so I guess things worked out pretty well.”

Simon and Emily have six children, five boys and one girl. Three of the boys, Ray, Ricky, and Robert graduated from Virginia Military Institute, and another, Ronnie, graduated from West Point.

On July 1, 2015, in a unique ceremony attended by several dignitaries at the Walk of Heroes War Memorial in Rockdale County, Georgia, Command Sergeant Major Simon Ramos was awarded the Purple Heart he never received for his wounds in Vietnam along with the Oak Leaf Cluster for the wounds he received in Korea. 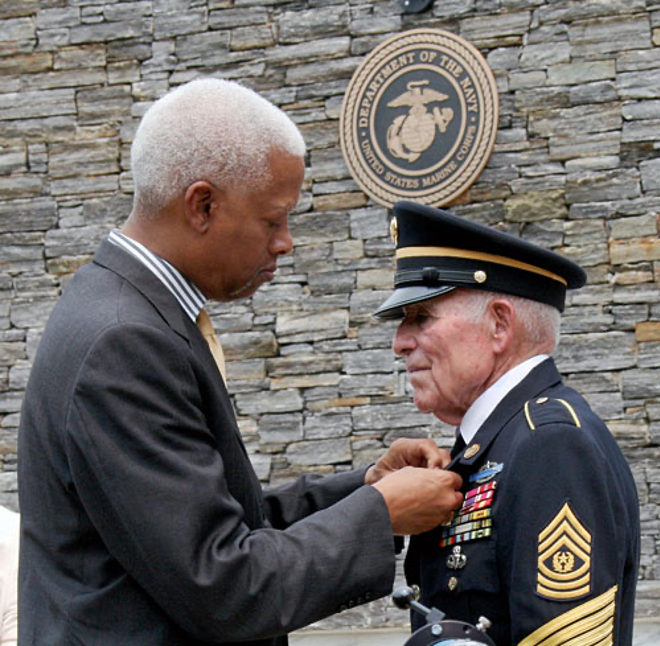 Perhaps riding and touring a 566,000 acre childhood playground of the Y.O. Ranch saddled to his favorite horse prepared Simon Ramos for an even bigger stage: A 35 year career covering the 4 corners of the world as a dedicated warrior for the United States of America. These type of men and women form the backbone of the United States military, they are the best America has to offer.

Want to see more stories like these? Consider making a donation to the VBC to help us continue our mission of sharing veterans stories. Donate today!