Shredded by a German artillery shell, Cpl. Lou Brissie refused to allow his leg to be amputated in the crazy dream that he might still play big league baseball. Thanks to grit, determination, and the support of Connie Mack, he did. Next time you read about your favorite sports star sitting out a game because of muscle “tenderness” or joint “discomfort,” think about Lou Brissie, who overcame grievous wounds in World War II to become a Major League All-Star pitcher.

Brissie had been a South Carolina high school pitching standout, and his dream was to reach the big leagues. By age 16, several clubs put out feelers to the 6-foot-5 lefty smoke-thrower. Among the clubs watching him were the Philadelphia Athletics, whose owner and manager Connie Mack had expressed a keen interest.

On December 7, 1944—the third anniversary of Pearl Harbor—Brissie was serving as squad leader in G Company, 351st Infantry Regiment, 88th Infantry Division, in the Apennine Mountains near Florence, Italy. The Germans launched a sudden and fierce artillery barrage.

Within minutes, three of G Company’s four officers were killed or wounded. And eight enlisted men went down. One of them was 20-year-old Cpl. Brissie.

An artillery shell had broken both of Brissie’s feet and shattered his left tibia and shinbone in 30 places. Shrapnel also struck his right shoulder, both hands and both thighs.

On the battlefield, and barely conscious, immobile in the snow and mud, squad leader Brissie was left for dead.

When medics arrived, they wanted to amputate. But Brissie, knowing an operation would end whatever chance he might have to play for Mack’s Athletics, refused.

Doctors warned that without an amputation, Brissie would die. Refusing, he said, “Doc, I’ll take my chances.”

During the following two years, Brissie underwent 23 surgeries and had 40 blood transfusions.

With his leg reconstructed with wire and a metal plate protecting it, he still clung to hope that he’d one day achieve his vision of pitching for Mack’s Athletics. And Mack did everything he could to encourage the young war hero.

Mack wrote to Brissie to remind him that his immediate responsibility was to heal, and promised that when the time was right, he’d offer the lefty a tryout. But when he saw Brissie throw on the sidelines with his damaged foot propped up by a crutch, he thought, “Poor boy, he’ll never be able to pitch again.”

In six decades of professional baseball, the great Mack rarely miscalculated. But he was wrong about Brissie. In 1946, the Athletics signed Brissie and sent him to the competitive Class A South Atlantic League’s Savannah Indians, where he excelled.

Even though opponents tried every trick in the book, including laying down bunts to test his mobility, Brissie led the league in wins, strikeouts and earned-run average.

At the end of the South Atlantic League’s season, the Athletics called him up. His first game was at Yankee Stadium on Babe Ruth Day, where he debuted with Babe Ruth, as well as baseball immortals Ty Cobb, Tris Speaker and Cy Young looking on.

Although Brissie took a 5-3 loss, he said, “I thought I had gone to heaven.”

During the 1948 and 1949 seasons, Brissie won 14 and 16 games, respectively, and got a spot on the 1949 All-Star team where he described playing with Ted Williams and Joe DiMaggio as being “like a kid in a candy shop.”

Eventually traded to the Cleveland Indians, Brissie retired in 1953. Pitching legend Bob Feller said that without World War II, Brissie would have been inducted into the National Baseball Hall of Fame.

In his post-baseball career, Brissie developed young American Legion, Latin American and Australian players. He also scouted for the Atlanta Braves and the Los Angeles Dodgers. 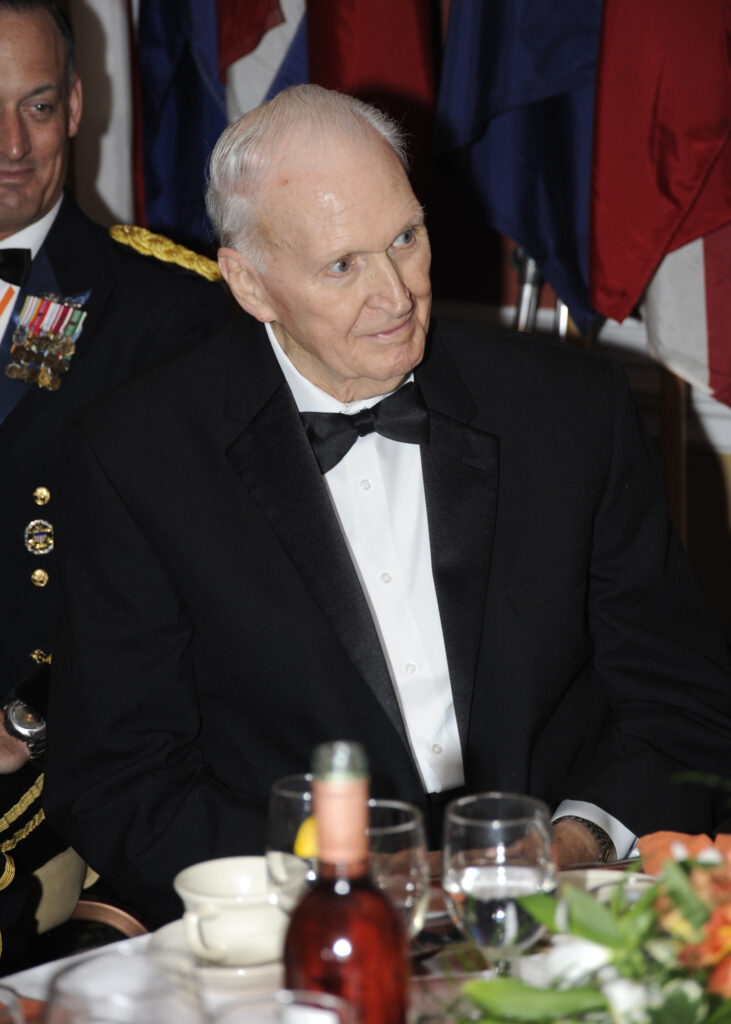 Former Major League Baseball Pitcher Leland “Lou” Brissie, is honored, during the 149th Annual Regimental Signal Ball, at the Fort Gordon Club, in Fort Gordon, Ga., June 26, 2009. The theme for the ball was “2009 Celebrating the Year of the Non-Commissioned Officer – “Pride in Service.” (U.S. Army photo by Frank H. Carter/Released)

He lived in pain the rest of his life and often used crutches to walk. In his last years, as he sought pain treatment at Veterans Affairs hospitals, he got to know wounded veterans from Iraq and Afghanistan. He dedicated himself to comforting the younger vets, whose injuries he described as “worse than WWII.”

Brissie, who was awarded two Purple Hearts and the Bronze Star Medal, steadfastly refused Hollywood producers’ offers to make a film about his wartime and baseball lives. Insisting that he didn’t consider himself a hero, he said he didn’t feel right about a biographical movie since he felt “blessed,” as many of his friends “never came home.”

Brissie died in 2013, and remains, sadly, unknown to all but the most devoted baseball historians. To help their players appreciate the gift they’ve been given, Major League Baseball owners should require them to learn more about the remarkable Lou Brissie.

— Joe Guzzardi is a member of the Society for American Baseball Research and the Internet Baseball Writers Association of America who now lives in Pittsburgh. He can be reached at guzzjoe@yahoo.com