Messenger Boy for the Dutch Resistance Remembers the War

There Will Always Be Storms George Zwaagstra was born in Tjerkwerd, Friesland, the Netherlands in 1933 and emigrated to Canada in 1951. He joined the Royal Canadian Air Force and became a Canadian citizen in 1956. He lives in Halifax, Nova Scotia, and has shared his remarkable story with the Canadian Museum of Immigration at Pier 21, Crestwood Preparatory College in Toronto, and the Veterans Breakfast Club.

I grew up in a tiny village in rural Friesland, northern Netherlands, where there’s almost as much water as land. Eleven lakes and countless canals form a crazy-quilt patchwork of waterways that can be traveled by boat in warm weather and by ice skates in cold. It’s hard to get around if you don’t know the routes. And it’s easy to hide if you do. During World War II, many young men simply disappeared from view. 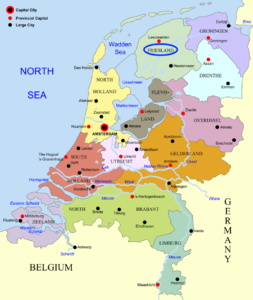 War came to our village on May 11, 1940. German soldiers banged on the door of our family’s grocery store wanting food. They had literally just arrived in our country the day before as part of a massive Blitzkrieg attack on the Netherlands. That it took only one day for Wehrmacht soldiers to find our tiny village suggests the sheer number of enemy soldiers swarming our country.

I’ll never forget the frightening sight of those soldiers in their field-grey uniforms, marching boots, and steel helmets. And I’ll always remember the not-too-distant sounds of bombs dropping, shells exploding, small arms firing those first days. Life as we knew it was over.

On the surface, however, life appeared almost normal for a while. The occupier’s hand wasn’t too heavy at first. Hitler planned to incorporate the Netherlands into the German state and was eager to win the population over to Nationalism Socialism. The Dutch largely treated the German occupiers with cold disregard. We simply ignored them in public. In private, we fought back. The Resistance began almost immediately and grew into a massive underground network of cells by 1942. Our family’s grocery store served as a key node in Friesland, and our village sheltered Jewish families, hunger evacuees from Amsterdam, and guerilla fighters.

Of course, I knew almost nothing about these activities until much, much later. We lived by a code of silence that persisted long after the war. My father told me early on, “George, the less you know the better. Don’t ask questions. And don’t answer any either.” Anyone who talked too much or inquired too deeply was assumed to be a German collaborator and informant.

So, when the young man who worked as our store’s delivery boy disappeared in 1943, I was never told why, and I never asked where he’d gone. I was simply told that I would now start delivering groceries by bicycle. At age ten, I guess I was old enough to work for the Resistance, though I didn’t really understand my role. I didn’t ask questions.

But I did come to learn I was delivering more than groceries. I had many customers, including six I visited on a regular basis. Two were my uncles and aunts, who were hiding evacuees from Amsterdam. Another farm about 11 kilometers from our store sheltered a family from our village. The oldest son was a guerilla fighter hunted by the Germans. I delivered messages to and from them regularly.

The process was simple. I would make a delivery of grocery items. The woman of the house would receive them. Then, she would say, “I didn’t order this package. Please give it back to your father.” That’s how messages got returned.

In early 1945, two high profile members of the Dutch Resistance came to us seeking refuge. Captain Philip Willem Pander was from a prominent Dutch manufacturing family in The Hague. The Pander company had a major contract to supply the Luftwaffe with ski-plane undercarriages for Hitler’s impending winter war against the Soviet Union. Captain Pander’s uncle and Pander company head was a fanatical Dutch Nazi, but the nephew was on our side. Pander’s adjutant was Folkert Wierda, a career Dutch Army officer whose son, Sytze, was two year older than me. Together, Pander and Wierda commanded 2,500 armed Resistance members and were among the most wanted men in the Netherlands.

Somehow, a weapons drop organized by Pander landed on the wrong farm, whose owner went to our local policeman. The local policeman then told his superiors, who tipped off the Germans, who determined that Pander and Wierda were hiding in our village.

Our community came under intense surveillance and many sweeping searches. But the Germans didn’t find anything until one perceptive soldier heard the incongruous sound of a typewriter coming from the back of the blacksmith’s house. A nighttime raid uncovered not only Pander and Wierda but a whole archive of records detailing past and future operations, weapons cache locations, and names and addresses of Resistance members. It was a devastating loss. On April 10, 1945, after weeks of interrogation at a nearby jail, Pander and Wierda were packed with other prisoners on a train for nearby Westerbork Transit Camp. From there, they were be transported to Auschwitz and Sobibor Concentration Camps in Poland.

Just before entering the city of Zwolle, the train stopped at the only river crossing. German guards selected nine prisoners from a boxcar, including Pander and Wierda, and ordered the others to watch. The men were lined up along the river bank and shot by a firing squad. One of the nine, J.J. Lamarche, jumped into the river as the shooting started and managed to play dead while floating downstream with the other bodies. Lamarche would be the only surviving witness to the atrocity committed on April 10. He told my father the story.

Six days later, the Canadian Army officially liberated our village. I recall low heavy clouds yielding to bright sunshine in early afternoon, just as an enormous vehicle appeared down the road rumbling toward us. The tank stopped at a canal bridge, and a few Canadians hopped off and crossed over by foot.

One of those soldiers was Dutch-born from a nearby village and had emigrated to Canada years earlier. “The war is over,” he said. “You are free.” People emerged from their homes singing, crying, cheering. It seemed like the street was filled with twice the number of people I’d seen during the war. The same thing happened in the neighboring villages. It was like awakening from a long nightmare.

One of those who emerged was Sytze, whose father, Adjudant Wierda, had been executed on the riverbank days before. Sytze and I got to know each other as we prepared for school to start up again.

In August, I took a train to Zwolle with Sytze and my father, who was involved in wrapping up the business end of the Resistance. Before he went to his meeting, my father brought Sytze and me to the exact spot on the riverbank where the eight men, including Sytze’s father, had been shot.

Sytze and I stood there in silence staring into the flowing river. I’m sure he imagined, like I did, the scene in April. The shots fired, the blood spilled, the bodies carried downstream. We didn’t speak. There were no words to capture the bitterness and sorrow that welled up in us both. Memorial at Kaderveer-Zwolle at spot where eight were shot on April 10, 1945 (Lammertshattem, wikimedia commons)

On the way back, Sytze and I stopped in Sneek, a small town next to the province’s largest lake, named Sneekermeer. The plan was to retrieve our bicycles and ride the rest of the way home. But given the nice summer day, we decided to rent a sailboat—which you could do for pennies–and enjoy some time on the water.

Sneekermeer had a reputation for unpredictable weather, so we shouldn’t have been surprised when, suddenly, a fierce storm kicked up just as we reached the middle of the lake. Our boat whipped around and started taking on water. Huge waves crashed over the sides, threatening to swamp us. Sytze fought to control the rigging, while I bailed frantically to keep us from going under. It was touch-and-go, but after about thirty minutes we reached the shore, soaked and utterly exhausted.

After we caught our breath, we looked out at the ferocious whitecaps we’d barely escaped.

Sytze put his hand on my shoulder and turned to me.

School started back up a couple weeks later. Being a student in peacetime was an entirely novel experience for me. Sytze, being two years older, attended a different school. I never saw him again.

But I’ve carried with me ever since the truth he spoke on the lakeshore.