The Story of Eugene Ely, the First Navy Test Pilot 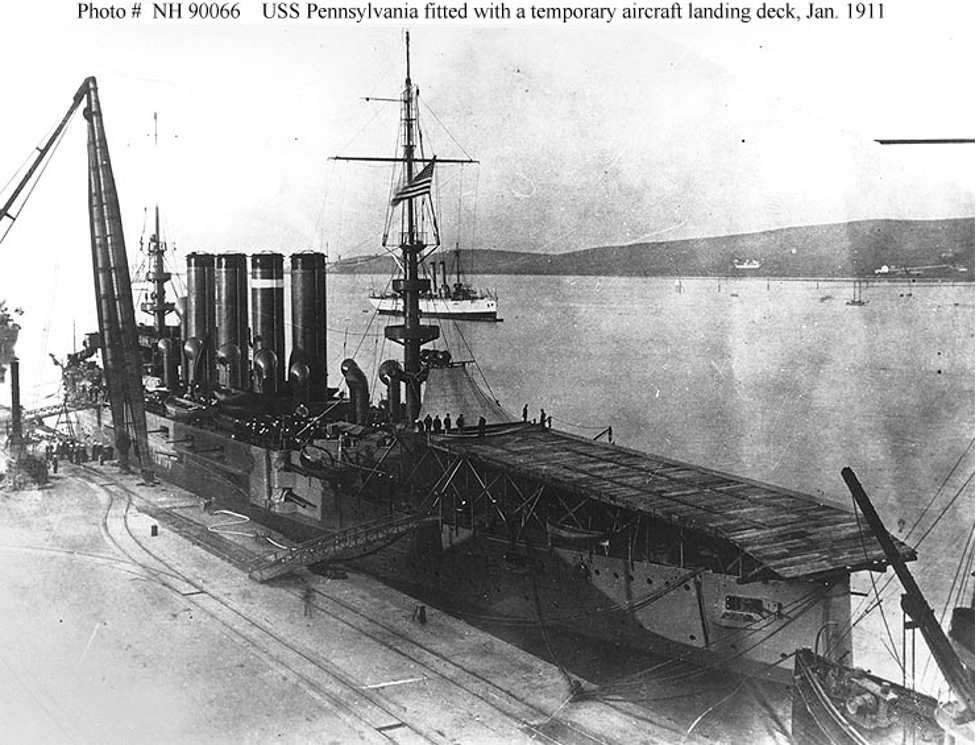 Ely at Tanforan Racetrack shortly before takeoff. Note the football helmet on his head and inflated bicycle tires over his shoulders. The tires were to help him float in case he had to ditch in the Bay.

History makers are often a little crazy. That was certainly the case for Eugene Ely, the first pilot to land an airplane on a Navy ship. He accomplished the feat on January 18, 1911 in San Francisco Bay. The plane was a Curtis Pusher, which resembles an oversized jogging stroller with wings. The ship was the USS Pennsylvania (ACR-4), which would be rechristened the Pittsburgh in 1912 to free up the state name for a battleship. The reason for the stunt was to prove that it was possible.

Ely lived a fast life, as if trying to escape a shadowy past. He claimed to have graduated high school and college in Iowa, but he probably dropped out in 8th grade. It’s hard to imagine him sitting in a classroom. In an era when Iowa farmers cursed gas buggies for spooking horses and the state speed limit was 15 mph, Ely chugged around in a red open-air Franklin, setting informal land speed records.

He saw his first airplane in 1910 at age 24 when his boss at a Portland, Oregon, auto dealership bought the Pacific Northwest franchise of Glenn Curtiss’s Aeroplane Company. The boss mentioned that he didn’t know anyone who could pilot the biplane he was selling. Ely immediately volunteered to give it a try and, without any training, took the plane up and crashed it. He was hooked.

Ely and his young bride Mabel spent the next year crisscrossing the country for Curtiss’s company. He flew in every exhibition he could. He was the only pilot to take up a $25,000 challenge to fly from Chicago to New York City. He crashed three times before ever leaving the Chicago suburbs.

The First Flight off a Navy Ship

Curtiss and Ely met Captain Washington Chambers, who was in charge of Navy aviation experiments. Ely claimed with confidence that he could take off from a Navy ship in Hampton Roads, circle the Norfolk Navy Yard, and land safely. Chambers arranged to have a wooden platform erected over the bow of the light cruiser USS Birmingham.  On November 14, 1910, Ely climbed into his Curtiss Model D “Pusher,” a four-cylinder flying tricycle with wings of spruce, ash, bamboo, and doped linen. He warmed up the engine and opened the throttle. The Pusher roared down the 83-foot platform, got to the edge of the bow, and plunged wheels down toward the water. Ely fought with the controls as his plane hit the waves. His rear propeller (the reason for the name “Pusher”) sprayed him with water and wood pulp from the shredded propeller tips. Somehow, Ely kept the plane aloft long enough to make it to shore. There was no triumphant flyover, but Ely had survived.

The First Flight Landing on a Navy Ship

Now the Navy wanted to see if the trick could be done in reverse: could an airplane land on a cruiser deck? Ely, of course, eagerly volunteered for the test.

He took off from the Tanforan Horse Racetrack, near the cow pasture that is now the site of the San Francisco International Airport. His target sat just off shore in the Bay. As with the Birmingham, the USS Pennsylvania sported a specially constructed deck, this time over the stern with ropes stretched across. Each rope was attached to sandbags. Ely had attached hooks to a plank underneath his Pusher. When Ely landed on the deck, the hooks would catch the ropes and prevent the plane from plowing into the ship’s superstructure.

The Pennsylvania’s crew clambered up every mast and smokestack and along every spar and gunwale to catch a glimpse of history. Most of the sailors had money riding on the stunt. Shipboard betting odds weighed heavily against Ely.

Ely’s Pusher crossed over the Bay, and the Pennsylvania came into view. He dropped to 100 feet. Astern the wooden platform, he angled the plane downward and lowered his speed. Aligned properly at the platform’s edge, he cut the engine and landed gently on the planks. His hooks caught the ropes and the Pusher stopped dead after 30 feet.

The assembled crew and neighboring ships at sea exploded in cheers and whistles. Ely unbuckled the leather lap belt and greeted the ship’s captain, who welcomed him aboard. The flyer acknowledged the cheers, then began turning his plane around for the return trip ashore. When he landed, he told a reporter: “It was easy enough. I think the trick could be successfully turned nine times out of ten.”

Eugene Ely’s trick in San Francisco Bay marked the birth of Navy Aviation. Within months, the Navy would purchase its first airplanes and begin training officers to fly.

The Death of Eugene Burton Ely

Ely had only a few months to enjoy his celebrity. Nine times out of ten is a good average for every endeavor except airplane flying. When asked when he would retire, Ely replied, “I guess I will be like the rest of them, keep at it until I am killed.”

Eugene Ely died on October 19, 1911, nine months after his history-making feat in San Francisco and two days short of his 25th birthday. He was flying an exhibition in Macon, Georgia, and failed to pull up out of a dive. He leapt out of the plane before crashing. But he didn’t have a parachute—pilots didn’t have them yet. The fall broke his neck.

In 1933, Congress posthumously awarded Eugene Ely the Distinguished Flying Cross “for extraordinary achievement as a pioneer civilian aviator and for his significant contribution to the development of aviation in the United States Navy.”

Photographers captured just about every moment of Eugene Ely’s historic flight on January 18, 1911, and you can view the full gallery of photos from the Naval History and Heritage Command’s collection. Below is a selection.