Nine Rules of Conduct Card for American Personnel in Vietnam, 1967

Nine Rules of Conduct Card for American Personnel in Vietnam, 1967 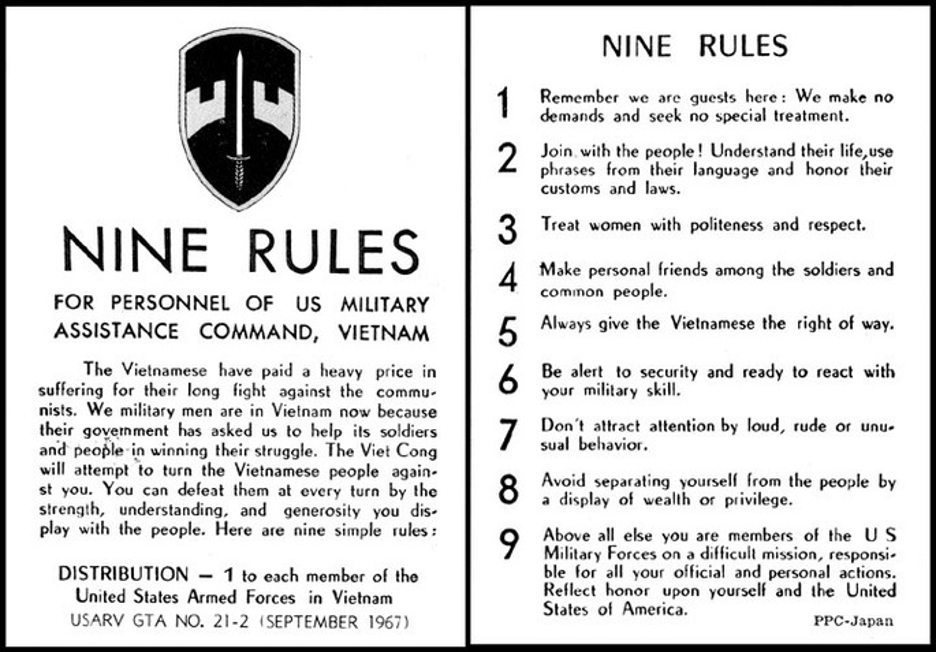 In 1967, General William Westmoreland, head of the American war effort in Vietnam, ordered that all servicemen and women arriving in country be given a pocket card reminding them of how to behave in this foreign land. This “Nine Rules of Conduct Card” (this one, courtesy of former 1st Lt. George Hunter) was part of Westmoreland’s to win the “Hearts and Minds” of South Vietnam’s villagers.

The Vietnam War was, in part, an insurgency, an uprising of a Communist-led opposition to the American-backed government in South Vietnam. These insurgents were known by Americans as Viet Cong, VC, or “Charlie.” They called themselves the National Liberation Front, and they worked hard to win the allegiance of the local peasantry. As counter-insurgents, American forces and their South Vietnamese allies in the Army of the Republic of Vietnam competed with the Viet Cong for the loyalty of the peasants.

The code of conduct enshrined in these cards was intended to assist the US in this war of “Hearts and Minds.”

These rules weren’t just dreamed up at a War College or Defense Institute. They had a long track record and proven history of success. The US Armed Forces adopted these rules of conduct from the very father of popular insurgency himself, Mao Zedong.

In 1928, Mao created a new Chinese Communist fighting force, the Red Army, which sought to overthrow the Nationalist government led by Chiang Kai-shek. Mao’s army was small but hoped to recruit poor peasants from the countryside. Launching his uprising from a base in southern Hunan Province, Mao issued what he called “Three Rules of Discipline and Eight Points for Attention.”

Here are the rules in all their original 1928 color and specificity:

Over time, these rules would be refined and abstracted into general principles suitable for a “people’s war” anywhere. Mao, in fact, taught these principles to Ho Chi Minh for use in his war against French occupiers. And the Viet Cong adopted Mao’s rules of conduct as their own in their war against the Americans.

So, in the end, did these Nine Rules work? Did they help the Americans win “Hearts and Minds” in Vietnam?

The best answer is they might have helped, but not enough. The two sides split the support of the countryside (the US had solid support in the cities), though we’ll never know precisely by how much. Perhaps, as one Vietnamese quipped, the peasants “supported whichever side was in their village.”

Historians debate whether the US could have prevented a Communist takeover of South Vietnam with a stronger and smarter strategy for winning peasant allegiance. Some argue that Westmoreland paid only lip service to “Hearts and Minds,” while fighting a brutal war of attrition that tended, over time, to turn villagers against American forces.

Others argue that “Hearts and Minds” was irrelevant, that the war was a war of aggression, North Vietnam against South Vietnam, and that local VC insurgents were a side show in a much more conventional international struggle. The war could only have been won with smarter tactics and more aggressive attacks against the Communist North.

Political scientist Richard Neustadt remained skeptical of either approach. “It was naive to claim that the United States could achieve victory with limited means in a civil war on the Asian mainland,” he wrote. “It was equally naive, I think, to assume that we could change or win the hearts and minds of people, democratize a country not remotely under our own control, and thus aim at nationhood through Saigon’s government. American military forces and civilian bureaucracies are not finely tuned enough for such assignments.”