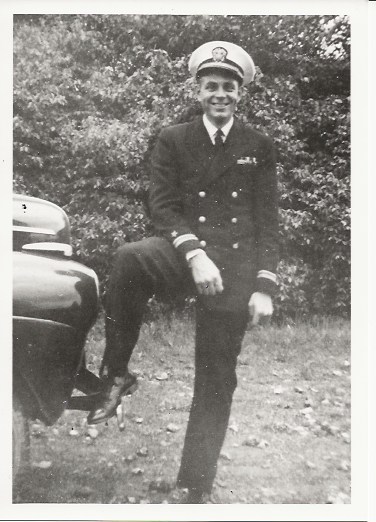 One-hundred-year-old Jim Kehl of Pittsburgh, PA, is one of the last surviving US Navy ship captains from World War II. Jim served aboard LSM-144 and LSM-145 and traveled tens-of-thousands of miles across the Pacific in 1944 and 1945, including the invasions of the Lingayen Gulf and Okinawa. He recently submitted this short history of and tribute to the amphibious fleet in which he served.

In 1940, the fall of France and the hurried evacuation of troops at Dunkirk eliminated democracy from the continent of Europe. The following year, the attack on Pearl Harbor and Japan’s occupation of the archipelago extending from the Philippines to the Solomons placed the United States 3,500 miles from the enemy’s homeland. This combination of reverses rendered the amphibious techniques of both Britain and the US obsolete.

The American amphibious force consisted primarily of APAs (Amphibious Personnel Assault) and AKAs (Amphibious Cargo Assault). Both types of ships required docks and piers to off-load personnel and equipment. Thus, to regain the initiative in both the Atlantic and Pacific required a new approach to amphibious warfare. 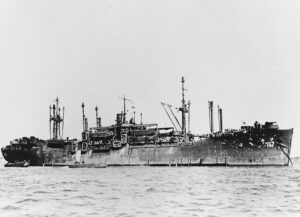 American and British engineers worked tirelessly to design and construct ships that could achieve this goal. Winston Churchill encouraged the US to design an ocean-going ship large enough to load and unload armored vehicles and personnel quickly onto a beach.

The first design in this project was presented in late 1941. With modifications it became the Landing Ship Tank(LST). Several years were required to build and perfect this and other types of ships and crafts in quantity and quality necessary to convert the two nations into formidable aggressors. Then, and only then, could D-Day at Normandy become a viable project. Likewise, only then did the island-hopping strategy in the Pacific begin to unfold into a methodical march toward the Japanese homeland. 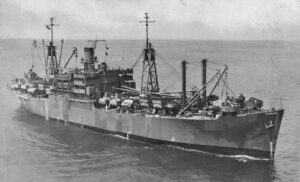 Marine engineering designed and produced thousands of amphibious crafts and hundreds of such ships, many of which possessed an ability to drive onto a beach and then retract. These inventions restored significance to the APAs and AKAs because they could anchor two to three miles off shore, and the new amphibious creations could deliver their cargoes ashore in mega-lightering segments.

In rallying to this need, the most popular result was the Landing Craft for Vehicles and Personnel (LCVP), commonly referred to as the Higgins Boat. The LCVP could carry 36 troops from ship to shore, and approximately 23,360 such craft were afloat during the war.

The Landing Craft Mechanized (LCM) and the Landing Craft Infantry (LCI) were constructed in smaller quantities, 11,144 and 932 respectively. In addition, the Americans and British collaborated on a third craft designated in the US as the Landing Craft Tank (LCT). By radically modifying and expanding the LCI and utilizing some LST technology, Navy engineers also created the Landing Ship Medium (LSM), the first of which saw action in the Battle of Leyte Gulf in October of 1944. 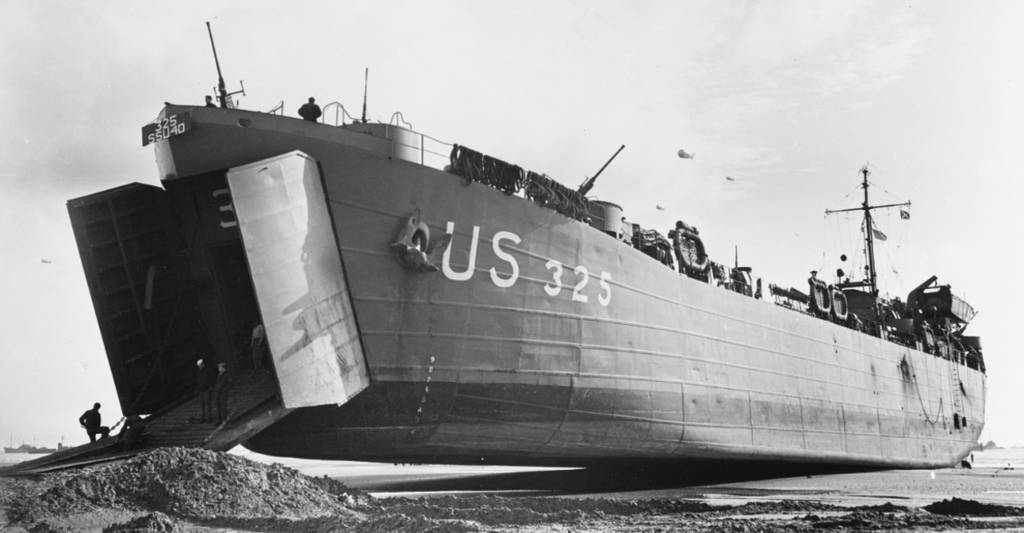 The LST, noted for its ability to carry large numbers of Army personnel and large quantities of cargo, had served earlier in the European theater and joined the Pacific war in 1943. Along with the LSM, the LST assumed the ship-to-shore burden throughout the remainder of the war.

These two ships were distinct in several ways. Both unloaded their cargo by opening bow doors and dropping a ramp that permitted mechanized equipment and/or troops to exit onto the beach. Second, the main anchor on these ships was attached to a steel cable, not to a linked chain, and was dropped from the stern, not from the bow. That location of the anchor provided an assist to retracting a ship from the beach. This maneuver was possible because the anchor was controlled by an engine of its own which could pull the ship off the beach and back toward the anchor. 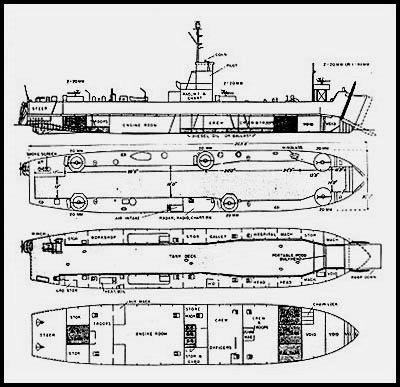 Compared to other ships of the fleet, these landing vessels were slow. At a maximum of 14 knots, the LSM was the faster of the two. This lack of speed and maneuverability caused sailors to joke that LST stood for “Large Slow Target.” The LSM crews dubbed their ships as the “Latest Suicide Machine.”

The former had a complement of 104, and the latter was manned by 59. More than a thousand LSTs and 558 LSMs were built in numerous shipyards, mostly along the Atlantic and Gulf coasts. Many LST hulls were constructed as far inland as greater Pittsburgh. All guns, masts, and other superdeck equipment were added downstream after the hulls passed under the bridges on the Mississippi River.

Accounting for the replacement and transfer of personnel, approximately a quarter million men served aboard these two types of amphibious ships (LSTs and LSMs). When the Navy declared that 1,366,716 men were on duty in the Pacific area in August 1945, amphibious ships and crafts accounted for more than 15 per cent of that total. Included in the count were the battle fleet, Navy Air, submarines, amphibious and auxiliary ships, plus all shore personnel. In the final four major battles of the war (Leyte, Lingayen Gulf, Iwo Jima, and Okinawa), LSTs and LSMs provided the primary means for ferrying troops, equipment, and supplies from Navy and Merchant vessels off shore to the beach. 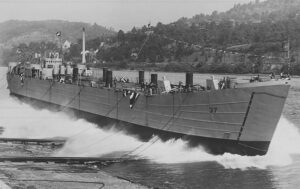 LST-37 launched at the Dravo Corp. shipyard at Neville Island, Pittsburgh, 1943 (US Navy)

By 1943, amphibious ships and crafts were emerging from assembly lines at a staggering rate. Between April 1943 and August 1945 (840 days), shipyards commissioned LSMs alone at the astronomical rate of two every three days. The Navy was challenged to find crews to man not only these ships, but also vessels of every class that were regularly sliding into the water. The supply of Navy personnel to meet these needs was exhausted. 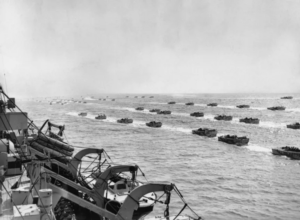 Volunteers and a few draftees assumed the burden of providing the complements for this new amphibious fleet. Most of these ships went to sea with a minimum of trained hands, guided by a few experienced reservists who were mixed into ships’ crews and groups of small crafts.

By May 1945, the Navy estimated that 87 percent of its personnel on active duty consisted of volunteers. This statistic suggests that more than 98 percent of amphibious ship personnel were volunteers. That poses the question: What was the character of these enlistees to whom this vital task was entrusted?

The call for recruits was answered largely by 17-21-year-olds (born between 1922 and 1926) who represented the face of American youth, but a caveat must be added. Black enlistees were assigned only to the role stewards until after the war. Our Black steward’s mate asked me the question on several occasions: “Why don’t I have a gun station during General Quarters?”

I offered him no valid answer except to point out that, in addition to stewards, storekeepers and yeomen were not assigned to a station. Like many others, I concluded that it was simply the Navy way, even though the steward insisted on his desire to participate. “What am I to do when the Japanese fly over?” he asked. “Throw garbage at ’em?”

At the time, with my limited understanding, I didn’t see this discriminatory practice as racial injustice. Today, of course, I know better. 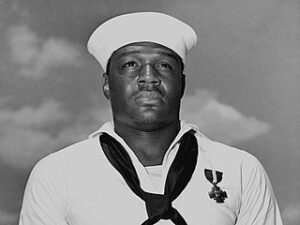 Dorie Miller, Mess Attendant Third Class, was untrained on the gun he used aboard the USS West Virginia (BB-48) during the Pearl Harbor Attack to down two Japanese airplanes. He received the Navy Cross for valor (US Navy)

All of the volunteers had two common elements in their backgrounds. First, their whole concept of government was embodied in Franklin D. Roosevelt, who served as President from 1933 to 1945. Second, their whole concept of the economy was the Great Depression. For many, the scars of Depression ran deep, and enlistment brought relief. Military life meant healthier diets, new clothes, medical care, and regular sleeping hours.

In addition, many of these enlistees had never ventured far from their homes. Travel by bus, train, and plane spelled a new dimension to their young careers. When I was in the Fifth Grade, I lived seven miles from downtown Pittsburgh. The teacher asked how many in the class had ever been to the city. Only three of us raised our hands. The Navy introduced us to a wider world.

Every ship was randomly endowed with a class of special characters –pranksters, card sharks, sea lawyers, braggarts, and some with social problems. Three were memorable to me. One sailor had no home to return to. Another had never seen a telephone and exclaimed: “There’s a noise in this thing!” A third was grateful for a three-dollar monthly raise in pay because it was needed to feed his family in Appalachia.

When General Quarters sounded, these amphibious crews were eager and dedicated to fulfill their unknown assignments. They became the indispensable umbilical cord that transported troops, supplies and equipment from APAs, AKAs, and merchant ships to the Army and Marines on the beaches. Without their continuous commitment to this hazardous service, the Pacific war would not have unfolded as rapidly as it did 36 months from Guadalcanal to Hiroshima, at a rate of 100 miles per month. Crews on these ships and crafts should take pride in celebrating their role in bringing peace to the world in 1945.