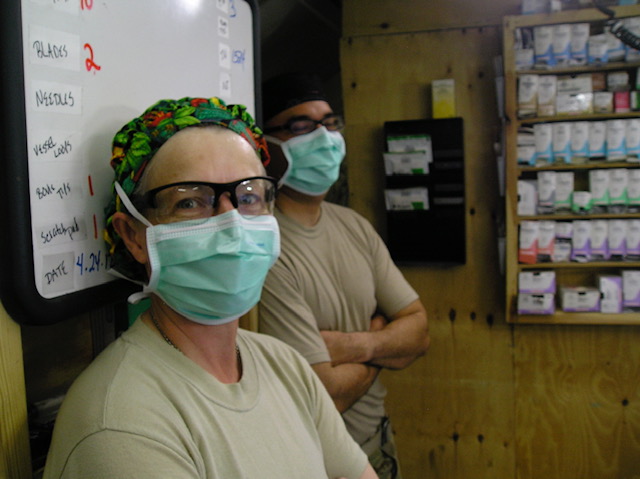 Patty remembers a “thump” followed by the sensation of a big hand picking up her body and squeezing the breath from her lungs.  Hurled through the air, her body slams against a 12-foot concrete blast wall.

A water truck packed with 3,000 pounds of explosives had just detonated inside the wire. Major Patty “Momma Bear” Justice lay wounded and motionless, casualty of another suicide attack.  She is 49 years old.

During WWII, Patty’s father worked on the secretive Manhattan Project to help develop the atomic bomb that ended the war. By the time Patty was born, her father was vice-president of a steel company in Mexico City. She recalled, “When we moved back to the states I was 8 years old, bilingual and with dual-citizenship. I didn’t lose dual-citizenship until I took the oath as an officer in the U.S. military.”

After high school Patty attended the New Mexico Military Institute with hopes of an Army military career.  An incident in advanced boot camp spoiled the dream.

“I ruined my knee. That terminated my ROTC scholarship so I transferred to Mount Saint Mary’s, an all-girl Catholic school in California. After graduation I later worked in defensive contracting until moving to Peachtree City, Georgia in 1989. I met a great guy, we got hitched, and I decided on a career in nursing. First, I attended Gordon College before receiving my nursing degree from Brenau University. I worked at Piedmont Hospital for 11 years, until the Twin Towers fell.”

Patty received a card in the mail explaining a need for qualified nurses in the military. “I thought, ‘shoot, I’ll try again,’ and I took a chance on being accepted.”

At 40 years old, Patty Justice received a direct commission into the US Army. “I didn’t even have to wear the butter bars of a 2nd Lt.,” she said, grinning. “I was commissioned as a 1st Lieutenant.”

After attending an officer basic course at Fort Sam Houston, Texas, Patty was assigned to the 3297th United States Army Hospital out of Fort Gordon, Georgia. The battalion moved to Brooke Army Medical Center in San Antonio as the campaign in Iraq heated up.

“I was there for 18 months. We were the last in a chain of care spectrums. Casualties were flown from Landstuhl Regional Medical Center in Germany into Brooke for the completion of their treatment. Then they went home, or at least to a VA hospital nearest their hometown.”

During this time the 3297th was disbanded to become the 3274th then reorganized a second time as the 75th Combat Support Hospital out of Tuscaloosa.

Patty returned to Piedmont Hospital after completing her assignment at Brooke.

“Boy, talk about going back to slow motion. It was like being demoted from the big league back to the little league. Piedmont is a great hospital, but a military hospital moves at a more industrious tempo. They expect more.”

To expand her knowledge as an officer, Patty joined a Civil Affairs outfit in Dallas, Texas for two years.

“Those 2 years gave me a better rounded background and bestowed really great training,” she said.

Patty would utilize all the training she ever had for her future deployment.

Up for a promotion to Major without slots available, she received a call from the 228th Combat Support Hospital in San Antonio. Their offer was unembellished: promotion to Major if she’d accept deployment to the 628th Forward Surgical Team hunkered down at an isolated location in Afghanistan called FOB (Forward Operating Base) Shank, nicknamed ‘Rocket City’ by the troops stationed there.

Patty accepted the promotion, and the challenge. Soon nicknamed “Mama Bear” by her colleagues, Major Patty Justice was going to war. From September of 2012 to September of 2013, she would reside with and patch up the troops at ‘Rocket City.’

FOB Shank, Afghanistan: “Well, it reminded me of the movie MASH; we lived in tents, no real roads, just about everything brought in by air, and that included the wounded and dying. We stayed busy and learned a lot about different cultures, the Afghans and Nepalese. Afghan men in the villages could not understand a woman in uniform, packing a .45 automatic, and so bold as to look them in the eye. They just couldn’t comprehend that.”

Mama Bear kept count of the action. She recalled, “We got hit 278 times during my tour, mainly in the mornings then into the afternoons, but not very often at night. Even though we were ‘blacked-out’ at night, I had the impression many of the enemy fighters were basically lazy, like, ‘It’s time for bed, see you in the morning.’ Our south side base did get hit at night so I guess it depended on which area had the laziest fighters.  Anyway, we received mortars, RPGs, and sniper fire on a regular basis.” 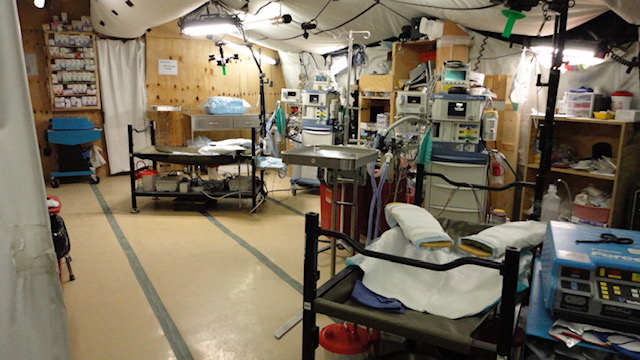 Her comments on the base medical field facility: “They did a great job considering we only had 14 people. We were on call 24/7, no shift work because the shifts depended on casualties. A 72 hour shift was nothing for us yet the next time we’d only work 4 hours. We saw and treated a minimum of 1,100 patients. These were not minor injuries. We dealt with the results of IEDs and combat, severed limbs; people absolutely blown away. During the fall and winter we mainly took care of Afghan soldiers, except for the American soldiers hit by sniper fire or suffering from frost bite or hypothermia. It was horribly cold during the winter. But then the ‘killing season’ began, May through December, and the American casualties really picked up.”

“Those [American] guys are good, resilient, and do what they are told.  The average age of a soldier was about 20, our field surgical team about 25, and there I am a 49 year old Mama Bear fussin’ over our boys.”

August 7, 2013: “Our small medical facility and living quarters were no more than a 30 second walk from ‘the wire.’ We lived close to where we worked because we had to respond quickly for the medevac flights, coming in and going out. That night we were hit by mortars and had to attend an after action meeting in the morning. I forgot something and had to return to the tent which put me outside the protective wall. Suddenly, ‘Boom’, and that’s all I remembered.” 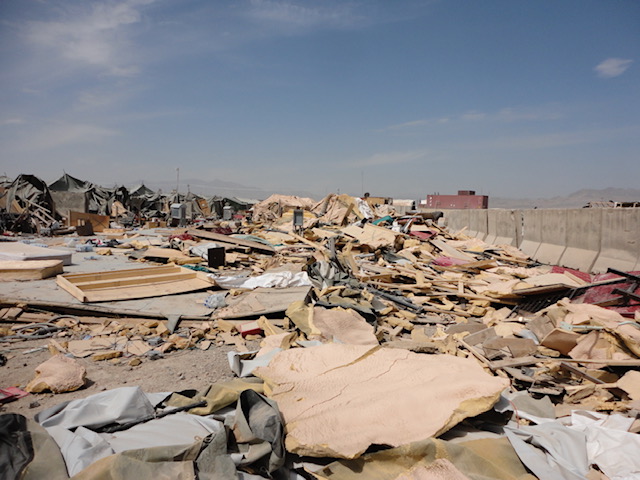 The ‘boom’ was a water truck. The truck was stolen a couple of months prior to the explosion, the two truck drivers found beheaded. During the interim, insurgents jam-packed the truck with 3,000 pounds of explosives, slipped through an Afghan checkpoint two months later then detonated the truck and themselves. The explosion created a 75-foot gap in the protective wire.

“The base was home to the 10th Mountain Division, Rangers and Special Forces guys. Some of the men had just returned from night combat duties and were sacked out when the truck exploded. Those guys didn’t hesitate. They grabbed their weapons and gear and hit the perimeter in their underwear to ward off any ground attack. Luckily, there wasn’t a ground attack.”

The explosion and resulting injuries dislocated Mama Bear’s shoulder and hip. Her ears resonated with a thousand church bells and continued to resonate for weeks to come. Plus, as later discovered, she received moderate Traumatic Brain Injury. She was medevaced to Bagram Air Base then to Landstuhl Regional Medical Center in Germany for rehabilitation.

“No way,” she said. “After a few days I told them I was just fine, my fingers and toes worked okay, my trigger finger still functioned, and I was ready to go back to FOB Shank.” When they asked about the terrible ringing in her ears, she replied, “No ringing whatsoever.” 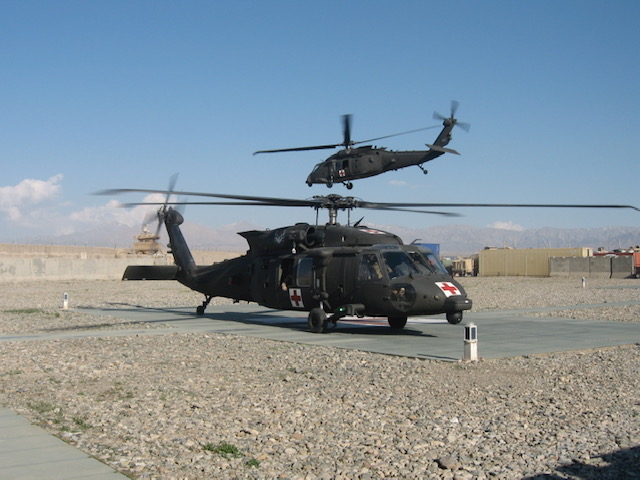 The fib worked. She returned to Rocket City and completed her tour. One month later, Momma Bear rotated home with her unit.

Patty Justice found a job at the Atlanta Medical Center Trauma Unit and got corrective surgery on her shoulder.

Months later, Patty asked about her Purple Heart. She’d never received one. The unprocessed paperwork for it and sixteen others were discovered inside a desk drawer at Bagram Air Base.

“Shoot, I was thinking about going to Fort Benning to purchase my own Purple Heart!”

In a special ceremony, Major Patty C. Justice was presented her Purple Heart on Friday, December 5, 2014, at the Walk of Heroes War Memorial at Black Shoals Park in Rockdale County, Georgia by the Georgia Department, Military Order of the Purple Heart & Chapter 465.