On February 9, 1946, Soviet Premier Joseph Stalin delivered with much fanfare an election speech at the Bolshoi Theatre in Moscow. Yes, an election speech. The Soviet Union held elections every four years for the Supreme Soviet. Stalin was a candidate. He had no opponents. 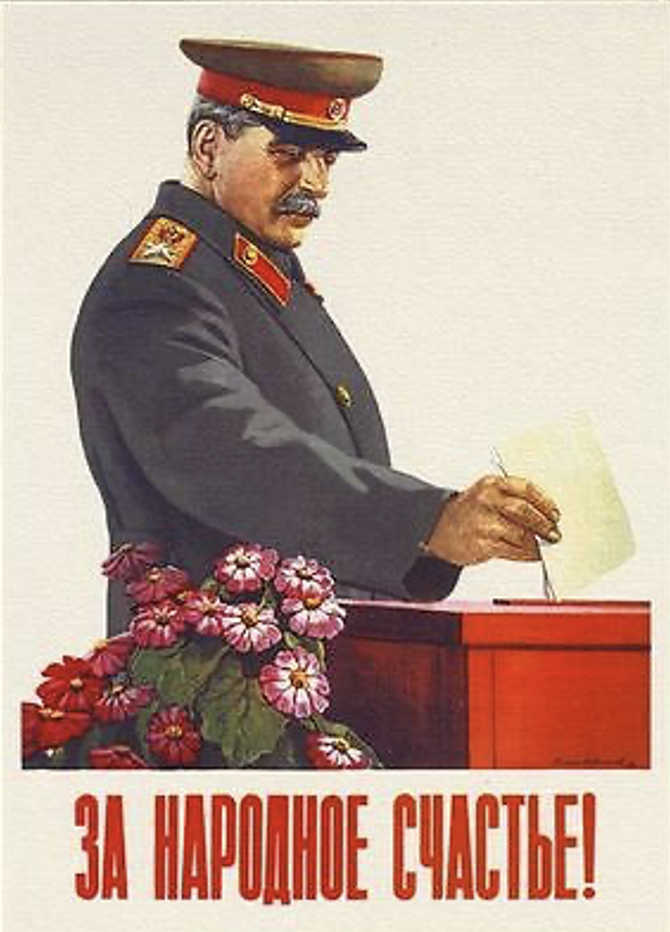 This was Joseph Stalin’s first speech since the end of World War II. So, it was special. But few suspected he would use the occasion to declare tacit war on the United States. 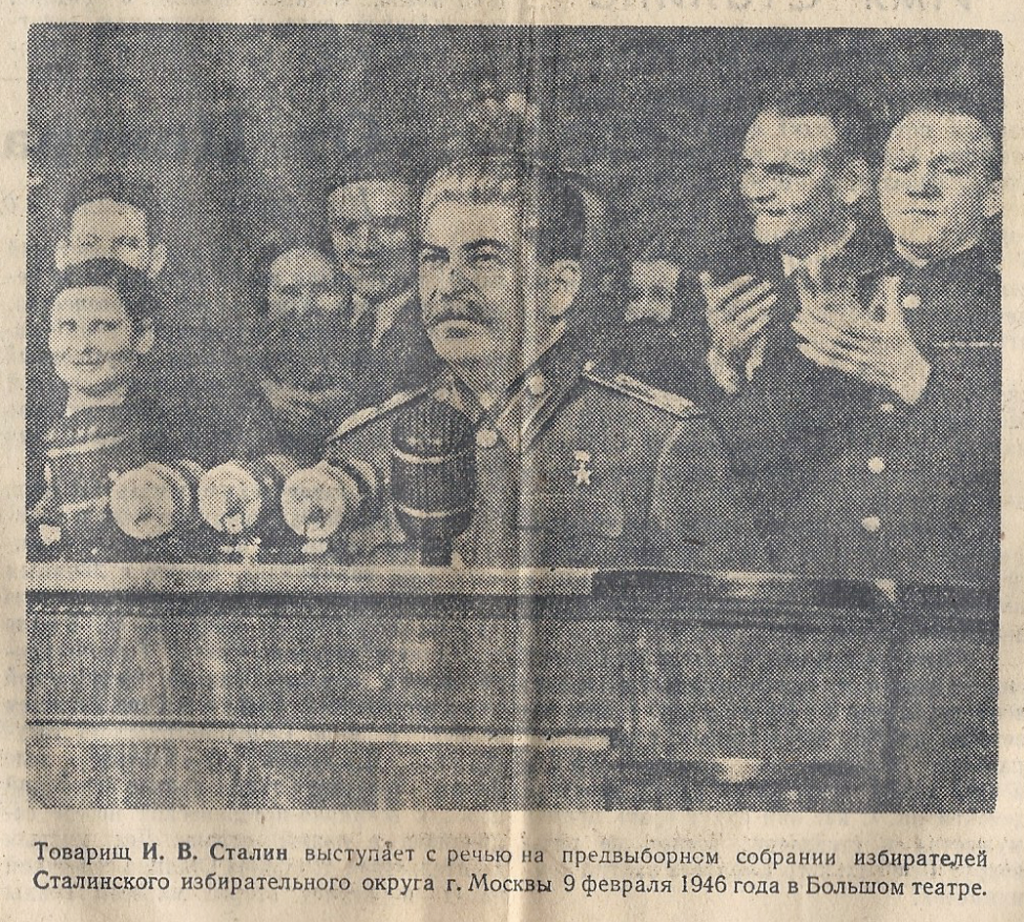 The most striking feature of the speech is the drastic change in tone from Stalin’s wartime orations. For the first time in almost five years, the Soviet leader boldly reasserts a Marxist-Leninist view of the world. During World War II, Stalin had shrouded his Communist convictions in patriotic rhetoric about “Mother Russia.” He’d played down his Communism to reassure his American and British allies that he was a faithful partner in their war against Hitler. Russian nationalism also helped rally the people behind a Total War to evict the Nazi German invaders. 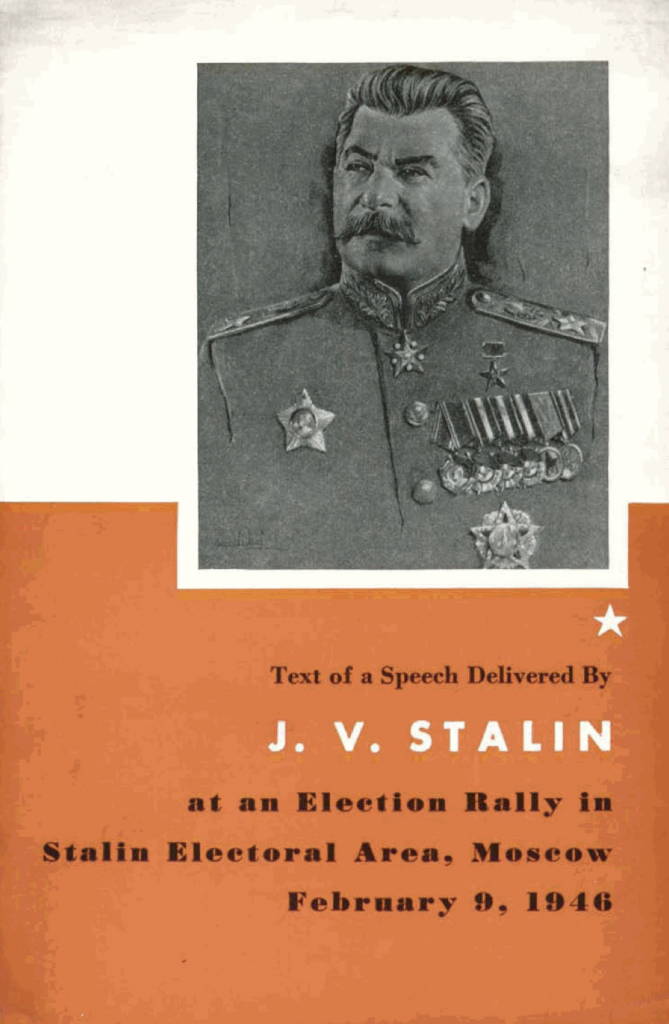 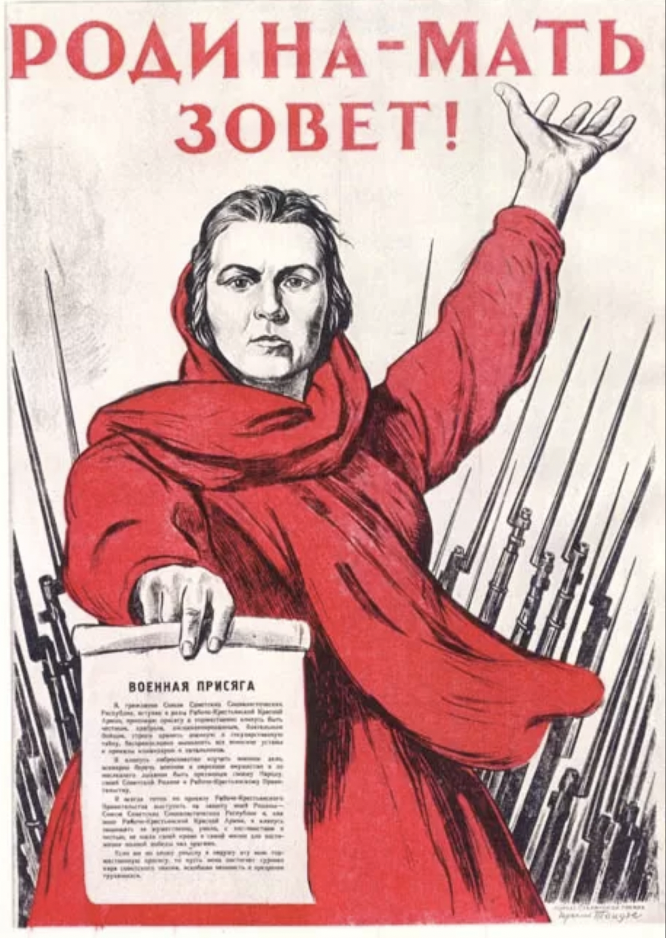 Then, at the Bolshoi, Stalin reversed himself with two bold claims.

The first claim was that capitalism caused World War II. “The war broke out as the inevitable result of the development of world economic and political forces on the basis of present-day monopolistic capitalism,” he says. Just as in World War I, competition over markets and access to raw materials brought capitalist countries to war with one another between 1939-1945. One of these belligerent capitalist camps–the Axis countries of Germany, Japan, and Italy—was so cruel and despotic that the USSR entered into an “anti-fascist coalition” with the US and Great Britain.

Despite the victory over fascism, Joseph Stalin continues, the threat of capitalism remains. “Under the present capitalist conditions of world economic development,” he says, another World War is inevitable. The United States and Great Britain will eventually clash over their imperial ambitions. And after they do, they’ll try to take out the Soviet Union. 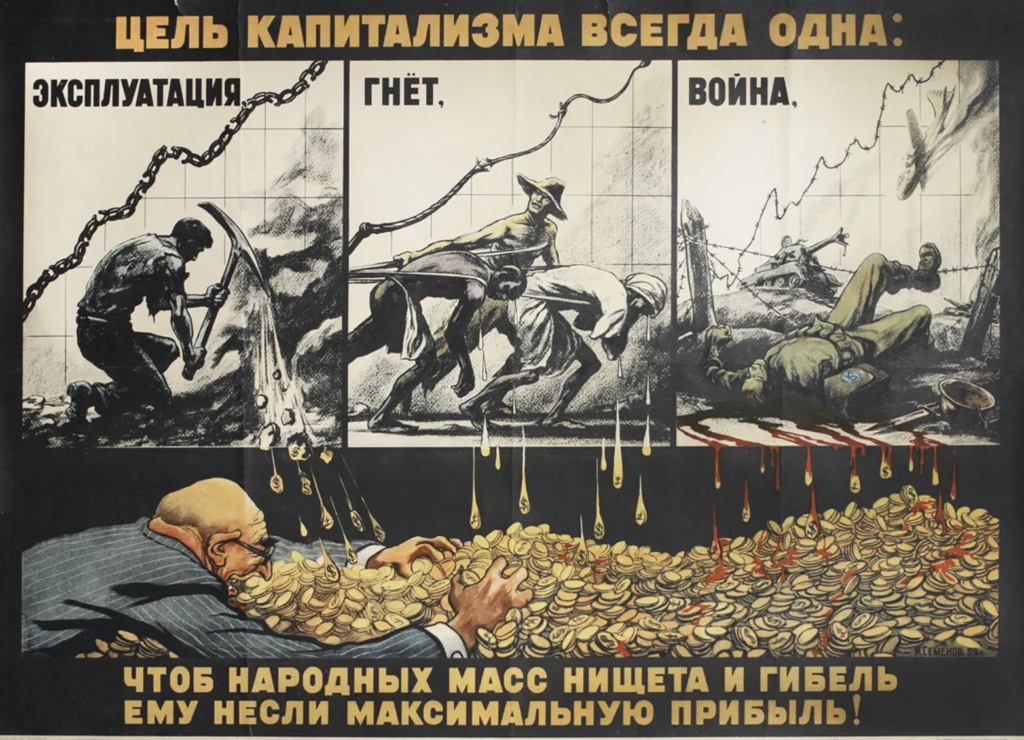 “The Purpose of Capitalism is Always One: Exploitation, Oppression, War. Poverty and Death of the People Bring Him Maximum Profit!” (1953) 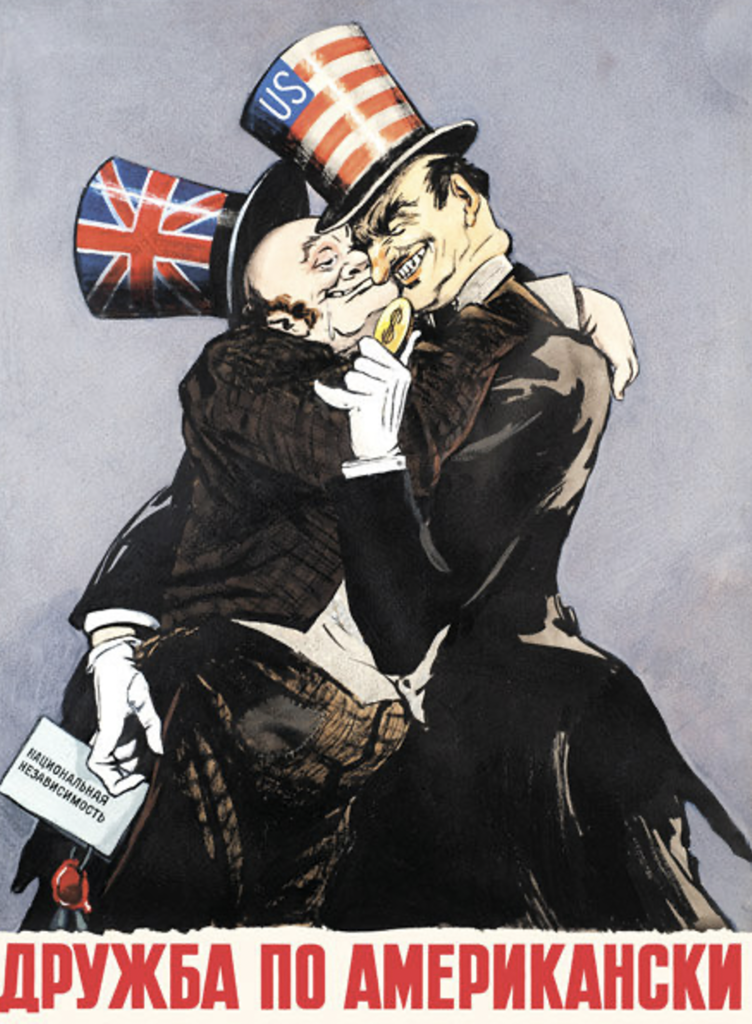 Stalin’s second claim was that the Soviet Union triumphed over Germany only by virtue of his industrialization and collectivization policies in the 1920s and 1930s. 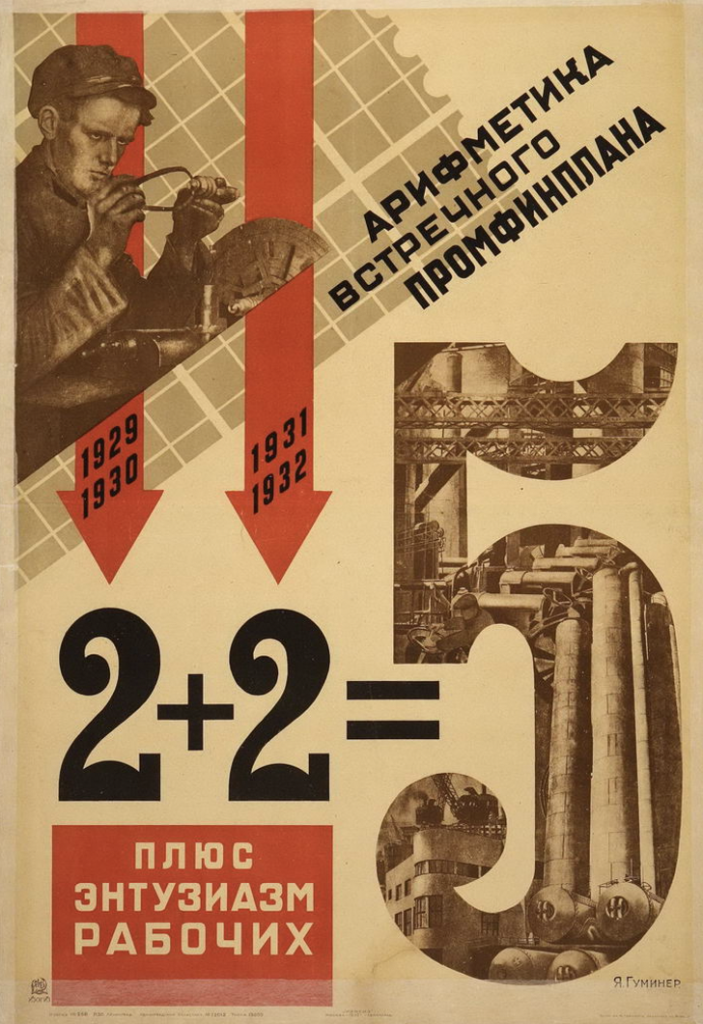 A 1931 poster urging early completion of the Five-Year Plan: “The arithmetic of an industrial-financial counter: 2 + 2 + Enthusiasm of workers = 5”

Before Joseph Stalin seized power, Russia was a backward, peasant society with hardly any industry. But beginning with Stalin’s first Five-Year Plan in 1928, the country grew rapidly into an industrial might. Stalin explains:

The Party knew that war was approaching, that it would be impossible to defend our country without heavy industry, that it was necessary to set to work to develop heavy industry as quickly as possible . . .  [The Party] therefore rejected the ‘ordinary’ path of industrialization [through light industry] and commenced the industrialization of the country by developing heavy industry. . . . There can be no doubt that without this it would have been impossible to transform our country into an industrial country in so short a time.

All this production equipped the Red Army for victory. As Stalin recited wartime armament figures, the crowd at the Bolshoi responded in a crescendo of cheers. During the war, he says, Soviet industry produced annually:

(Note that Stalin kept a buzzer at the podium to tell the audience to stop applauding, for no one dared stop on their own.) 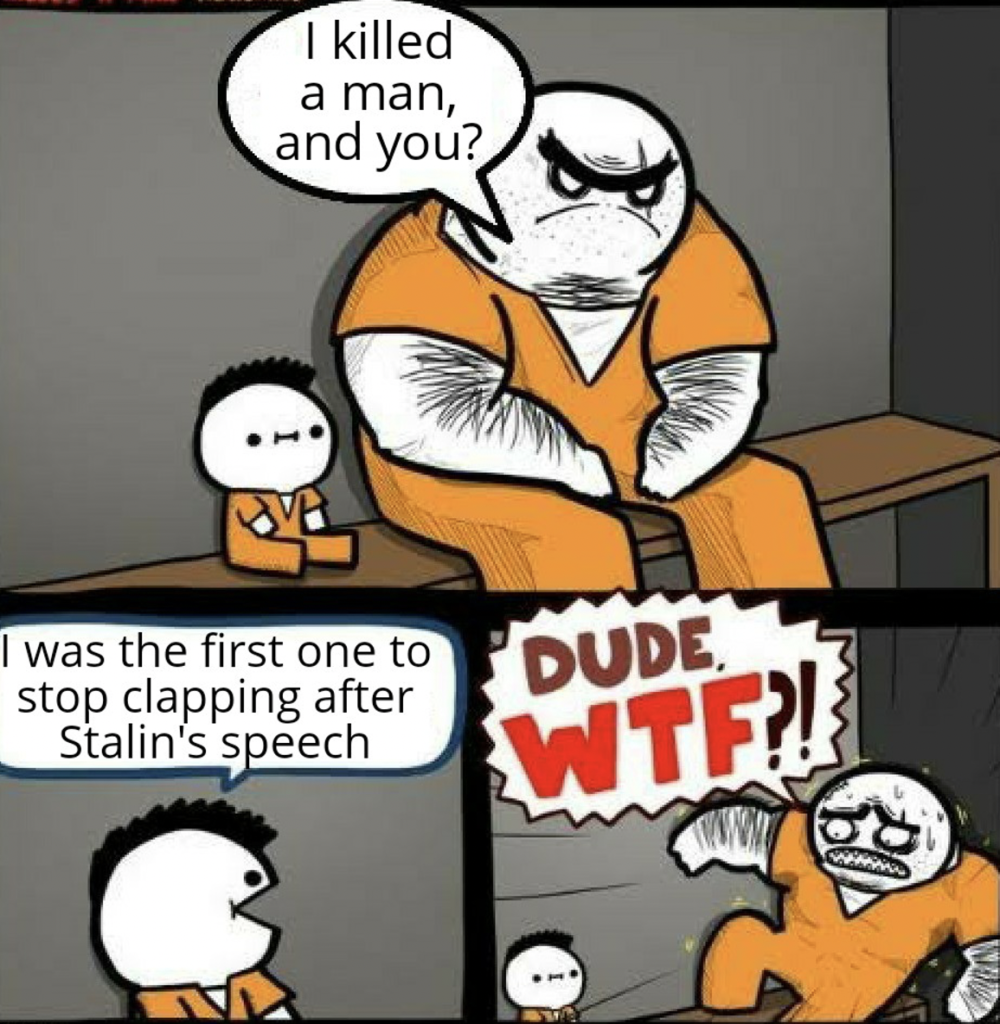 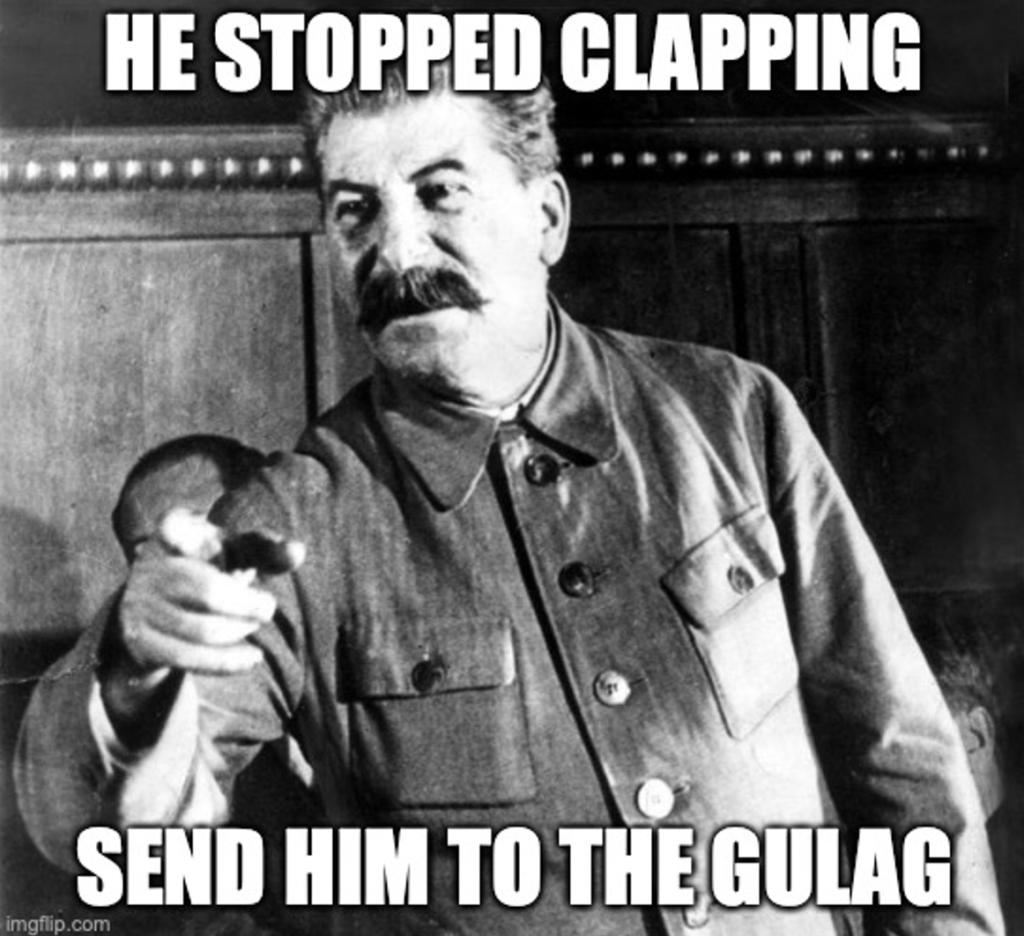 Such self-congratulation befits a candidate for office, but Stalin was also reminding audience members about the fruit of these Five-Year Plans in order to prepare them for the Five-Year Plans to come.

Everyone remembered the sacrifices of the pre-war years: the chronic food shortages, the fifteen-hour work days, the purges of unproductive workers. During the war, things got even harder, but Comrade Stalin promised there would be peace after victory, rest and reward after the unspeakable suffering that Total War required.

Now, nine months after Germany’s surrender, Joseph Stalin disclosed that the struggle and sacrifices will continue. There will be new Five-Year Plans, at least three, maybe more. The goal will be to triple current production in order to defend the Motherland from the enemies that surround it

“It can be done, and we must do it,” Stalin proclaimed to loud applause.

Cold War expert Vladislav Zubok contends that Stalin’s sudden call for a maximum rearmament effort in 1946 was, in fact, cover for the hugely expensive and top secret Soviet Atomic Bomb and ballistic missile projects. These two weapons programs were going to stress the Soviet system and delay any transition to a peaceful consumer-oriented economy. But because these programs were secret, Stalin had to fall back on his older rhetoric of sacrifice, rooted in Marxist-Leninist understandings of history, to prepare the Soviet people for the hardships to come.

Five thousand miles away, in Washington, D.C., Stalin’s Bolshoi speech landed like a percussion grenade. The White House and State Department stirred with questions. What were the implications of Stalin’s return to hardline Communist ideology? Would he not be satisfied with anything short of world domination? Would another World War start up even before the ashes of Europe had cooled?

Thirteen days after Stalin’s speech, State Department teletype machine chattered with answers in the form of a remarkable 5,000-word telegram. It had been dictated by the Acting Ambassador to the Soviet Union George F. Kennan from his sickbed in Moscow. 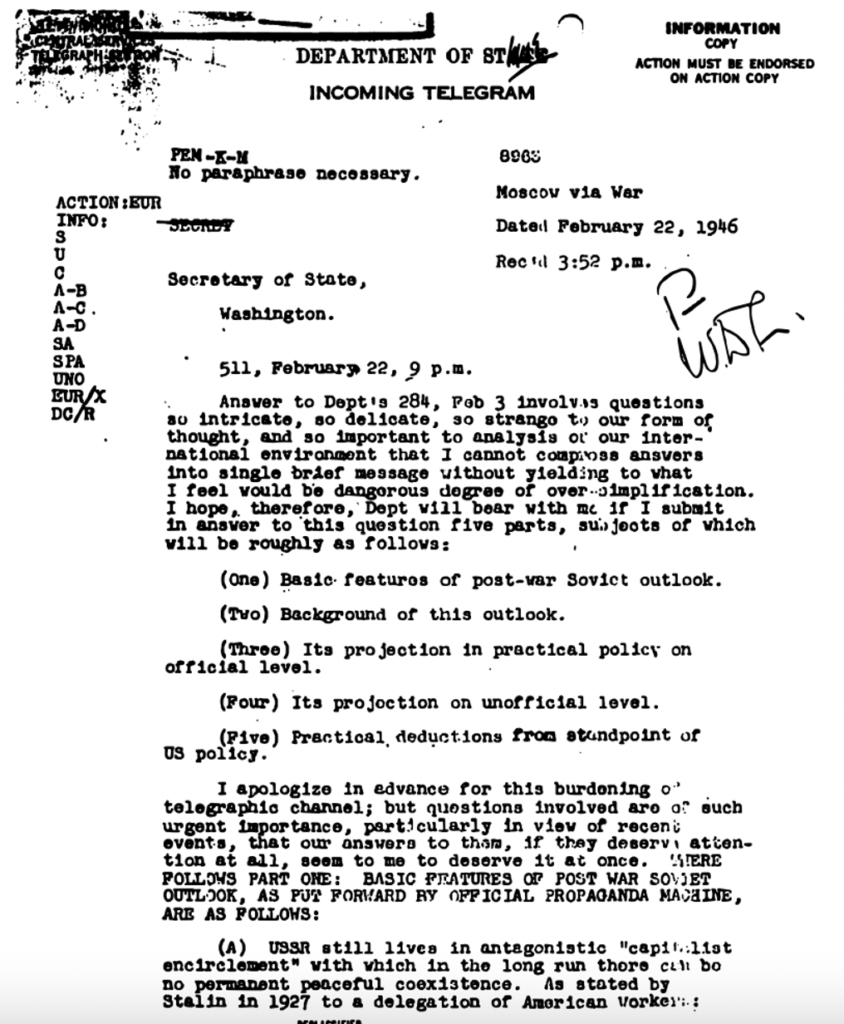 Kennan’s “Long Telegram” would rock the Truman administration and rally it to resist Joseph Stalin’s provocation. We’ll take up Kennan’s message in an upcoming post and examine how “Containment” became the watchword of the new “Cold War.”