On 2 May, a British intelligence officer doing the London Daily Telegraph crossword puzzle noticed No. 17 across: “One of the U.S.” The answer, he knew, was “Utah.” Ordinarily, nothing remarkable about that.

But this was 1944, a month before D-Day, the largest amphibious invasion in history. And the answer to No. 17 across was the code name of the beach assigned to the American 4th Infantry Division.

A coincidence, or something more?

Two years earlier, the same newspaper had dropped a crossword puzzle clue, “French port,” whose answer was “Dieppe”–the very location of an Allied raid scheduled for the next day. British counter-intelligence, the MI5, ruled it a coincidence. Now, here it was again, but this time the clue leaked far enough ahead of the operation that it might alert German high command.

A quick scan of other recent crossword puzzles in the Daily Telegraph revealed more codewords: “Juno,” “Gold,” and “Sword,” all secret names for Allied landing beaches.

This could be no coincidence. MI5 agents concluded that someone was signaling the Nazis about Allied invasion plans.

On June 1, MI5 ordered all copies of the Daily Telegraph pulled from circulation. Then, they traveled to the Strand School in Effingham, Surrey, south of London, about 30 miles from the English Channel.  There, they arrested the school’s headmaster, Leonard Dawe. Dawe was a 54-year-old World War I veteran who had been compiling the Daily Telegraph‘s crossword puzzles in his spare time since 1925. As students and faculty watched in horror, two MI5 agents stormed into the school, located Dawe, gripped his upper arms, and walked him briskly to a waiting car. “We were astonished at the thought that Mr. Dawe was a traitor,” one student recalled.

Agents ransacked Dawe’s home and office and subjected him to days of intense interrogation. Dawe was terrified. He later said he was certain he’d be shot. But the unassuming schoolteacher never changed his story. He had no knowledge of codewords. He was just trying to keep the crossword puzzle fresh and challenging.

After the D-Day landings, when the Allies were certain the Normandy Invasion was a success, MI5 released Leonard Dawe back to his Strand School classroom. The whole thing, agents reluctantly concluded, had been another bizarre coincidence, just like with the Dieppe Raid in 1942, only more outlandish.

For 40 years, this was the end of the story. The Great D-Day Crossword Puzzle Scare stood as the biggest coincidence in world history, an example of what can happen if you allow the natural human instinct for pattern-detecting get the better of you.

It turns out, however, that there was a pattern, as well as a secret. But the final twist to the story wasn’t known until the 40th anniversary of D-Day in 1984.

That year, the Daily Telegraph ran an article about the D-Day Crossword Puzzle Mystery, and one of Dawe’s former students, a man named Ronald French, came forward with an astonishing claim. He told his story exclusively to the Telegraph. 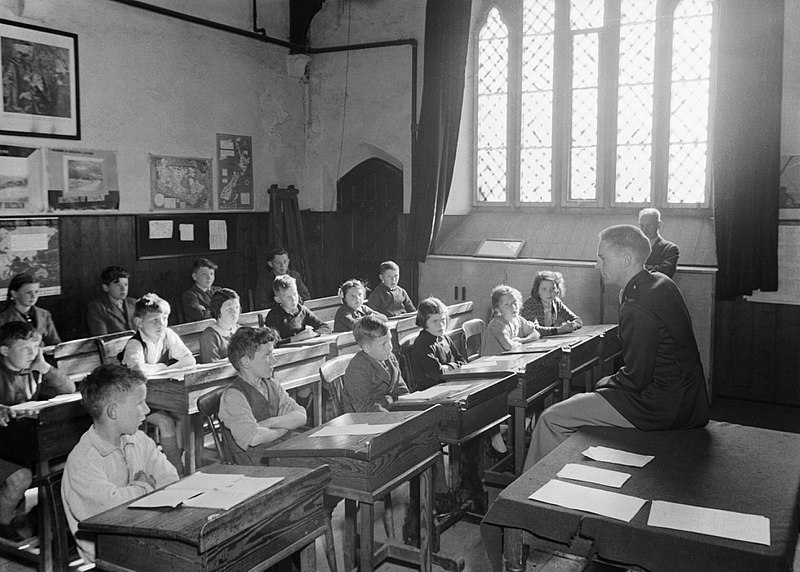 American soldiers talks to a group of Dorset children about life in the United States. (UK Ministry of Information Photo Division)

French said he and other boys at the Strand School regularly sat with Dawe as the wordsmith crafted his puzzles. Dawe would ask the boys to fill a blank puzzle with unusual words that might make good answers. They didn’t have to write clues, only the words. The boys would compete with each other to come up with the most imaginative terms they could.

In the spring of 1944, French started jotting down some vocabulary he’d picked up hanging around American GIs in Surrey. A lot of the US senior officers, older men, liked having children around. “The soldiers were obviously lonely,” he recalled. “Many had children of their own, and they more or less adopted us. We’d sit and chat and they’d give us chocolate.”

The Americans got used to the boys and spoke freely around them, “because I was obviously not a German spy,” explained French.

During these conversations , French kept his ears perked for anything that might be crossword-puzzle worthy. “Omaha,” “Utah,” “Overlord”–these were words French and perhaps hundreds of other kids heard in the weeks leading up to D-Day.

Fourteen-year-old Ronald showed off his new words to his teacher during the puzzle-crafting sessions. Dawe copied the terms and included them in his crosswords. That’s how D-Day’s codewords ended up in the Daily Telegraph.

Dawe, it turns out, was keeping a secret from MI5. Under interrogation, Dawe must have figured out what had happened. But he never told MI5. He never cracked. Instead, upon his release after D-Day, Dawe called Ronald French into his office and conducted his own terrifying interrogation. Here is the account French gave of it in 1984:

Soon after D-Day, Dawe sent for me and asked me point blank where I had gotten those words from. I told him all I knew. Then he asked to see my notebooks.

When he opened them, Dawe was horrified. Dawe screamed at me and said that my books must be burnt at once. I have never seen anyone so angry in my life. I was really scared, terrified of imprisonment.

So, the greatest coincidence in history was really a story about childhood innocence brushing upon against the deadly realities of war.

Doubts remain about whether this is truly the end of the story. As a later puzzle editor at the Daily Telegraph put it, “Somewhere, someone will clear out an attic and come across more papers relating to ‘The Crossword D-Day Codenames’. I hope they will contact The Daily Telegraph when they do.”