The Last Man to Die in World War I 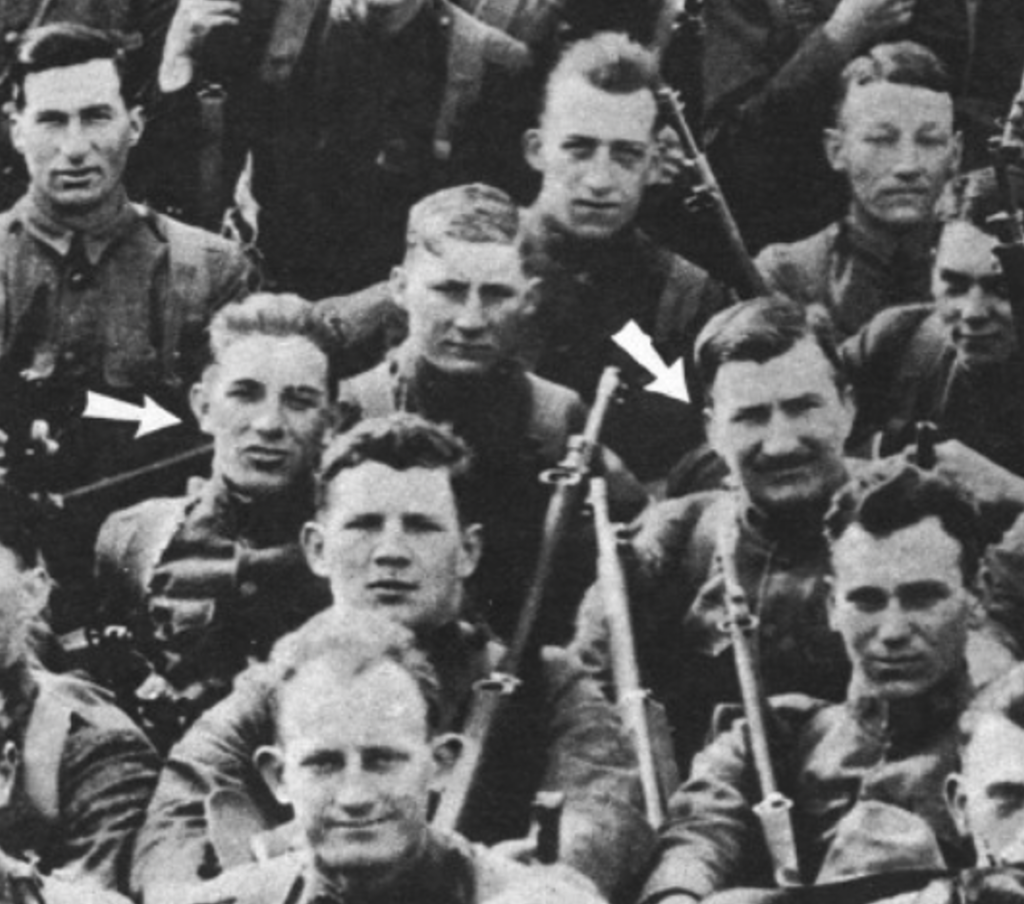 World War I ended precisely on the 11th Hour of the 11th Day of the 11th Month of 1918. At the moment the bells struck and the guns went silent, a body fell in a French village.

Henry Gunther was a bank clerk from Baltimore, drafted the year before. He’s listed as the last man killed in World War I. But Gunther’s case might more accurately be labeled “suicide by enemy fire.”

German officials signed the Armistice at 5:00am on November 11, 1918, aboard a railroad sleeper car stopped in a clearing at the village of Le Francport near Compiègne. Germany was the last of the Central Powers to surrender. Its allies, Austria-Hungary, Bulgaria, and the Ottoman Empire, had already quit the war. Desertion plagued the German Army in the field, and starvation haunted the homefront. Defeat was inevitable.

The Armistice wasn’t a peace treaty. Nor was it officially a surrender. But it sure looked like one. The French dictated terms, which were severe. All shooting would stop at 11:00am that day. The Germans would withdraw in haste to east of the Rhine River. The Allies would occupy the Rhineland, and Germany would surrender its guns, planes, and ships. Allied POWs would be released. German POWs would not. It was all a foreshadowing of what was to come in the Versailles Treaty the following year.

US government and military officials weren’t present at the signing of the Armistice. General John Pershing, Commander of the American Expeditionary Force in Europe, opposed it. He believed stopping the war before Berlin was captured would be a mistake and would let the Germans off too easy. He ordered his men to continue fighting through the negotiations and even after the Armistice was signed in the early morning of the 11th.

This order cost the US military 3,500 casualties that morning alone. All told among Allies, there were over 11,000 casualties, including 2,738 killed, on the morning of November 11.

The very last of these was Pvt. Henry Gunther, a 23-year-old German American who had worked as a clerk and bookkeeper for National Bank of Baltimore before getting his draft notice. Having faced anti-German hatred in Baltimore, Gunther kept his head down and got promoted to supply sergeant with the 313th Infantry Regiment of the 79th Division.

Gunther shipped to France in July 1918. Catching a glimpse of the misery of the trenches—with their mud and stench, danger and horror—he wrote a friend back home to stay clear of the war and especially to avoid frontline service if he could.

An Army postal censor intercepted the letter and passed it on to Gunther’s commanding officer. Gunther was busted to private, removed from supply, and made a rifleman on the frontlines.

Gunther’s timing couldn’t have been worse. His 313th Regiment began almost 60 days of continuous combat, most of it in the bloody Meuse-Argonne Offensive. Gunther survived the meat grinder unscathed, except for a noticeable change of mood. He became brooding and withdrawn, stung especially by rumors in the ranks that he was a German sympathizer.

The worse the fighting got, the more determined Gunther became to prove his loyalty and courage.

On the morning of November 11, Gunther’s Company A was charging forward, as ordered. The objective was the tiny village of Ville-Devant-Chaumont twelve miles north of Verdun and almost as close to the Belgian border.

The men marched, bayonets fixed, through the fog across a marsh at 9:30am, 90 minutes before the ceasefire. German artillery opened up, and some of Gunther’s comrades fell.

Word reached the men that an Armistice had been signed, due to take effect at 11:00am. But along with that message came another from Brigadier General William Nicholson: “There will be absolutely no let-up until 11:00 a.m.”

A few minutes before 11:00am, the men of Company A spotted the village through the fog. Two German machine guns stood guard at the edge of the village. Gunther and the other American soldiers lay still opposite the guns, counting the moments until the war was over. The Germans, too, held their fire. 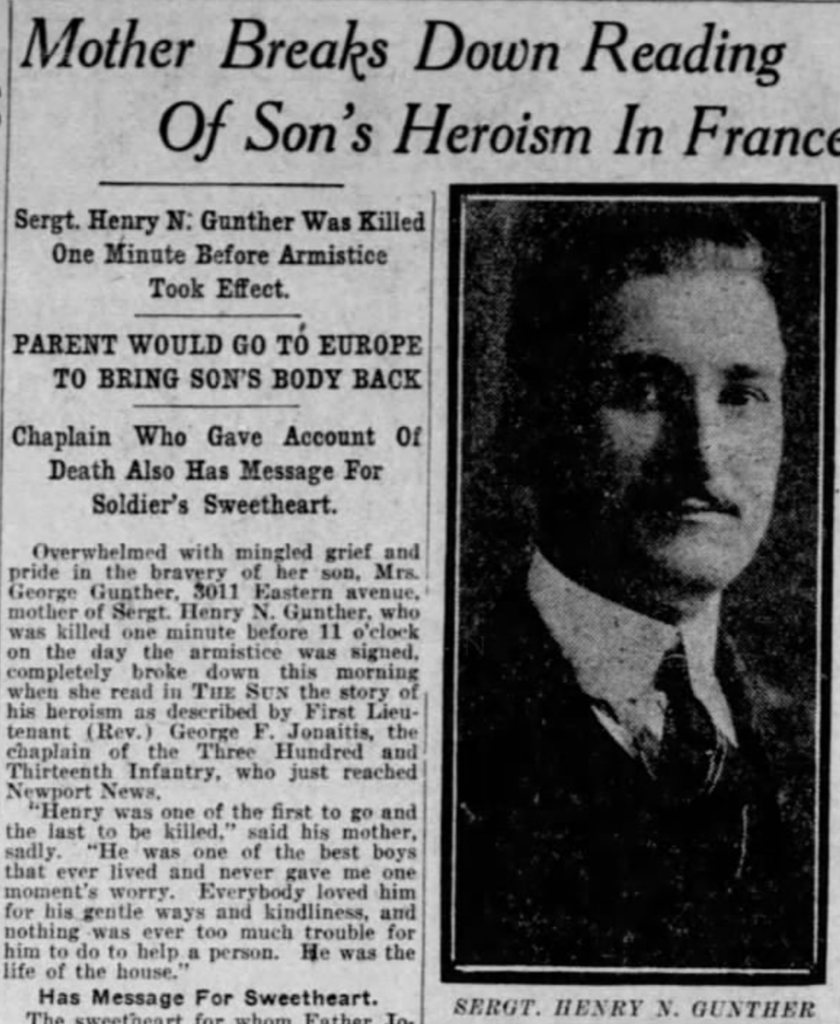 Suddenly, Gunther jumped up and charged the machine guns. His fellow soldiers shouted for him to stop, as did the Germans. In fact, the machine gunners stood up and waved, urging him to turn around. Then, Gunther fired a shot. The Germans had no choice. They fired back in a five round burst.  One bullet struck Gunther in the left temple, and he fell to the ground. Those who were there swore that the rumbling of artillery stopped the very moment his body hit the earth. 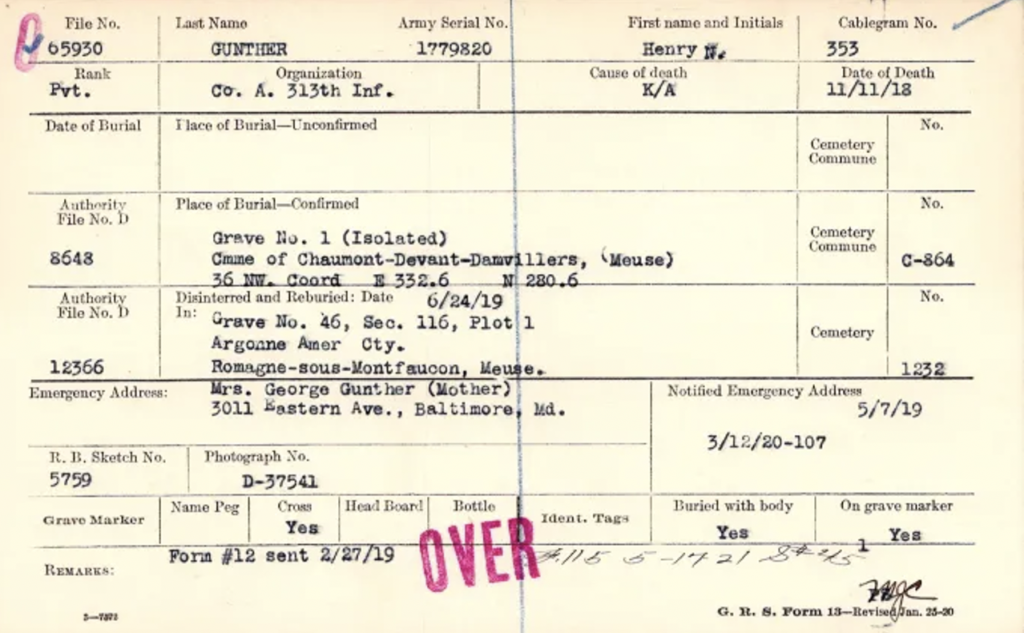 If Gunther’s suicidal charge was meant to redeem his reputation with the Army, it worked. General Pershing’s statement on the end of hostilities the next day specifically named Gunther as the last American killed in the war. The Army subsequently restored his rank of sergeant and even awarded him a Distinguished Service Cross. Back home, VFW Post 1858 would be named after him. And, 90 years after his death, the French government dedicated a memorial “En Hommage à Henry Gunther” on the spot where he fell.

Officially, Henry Gunther is remembered as a hero. But, as with most heroes, the real story isn’t so simple. 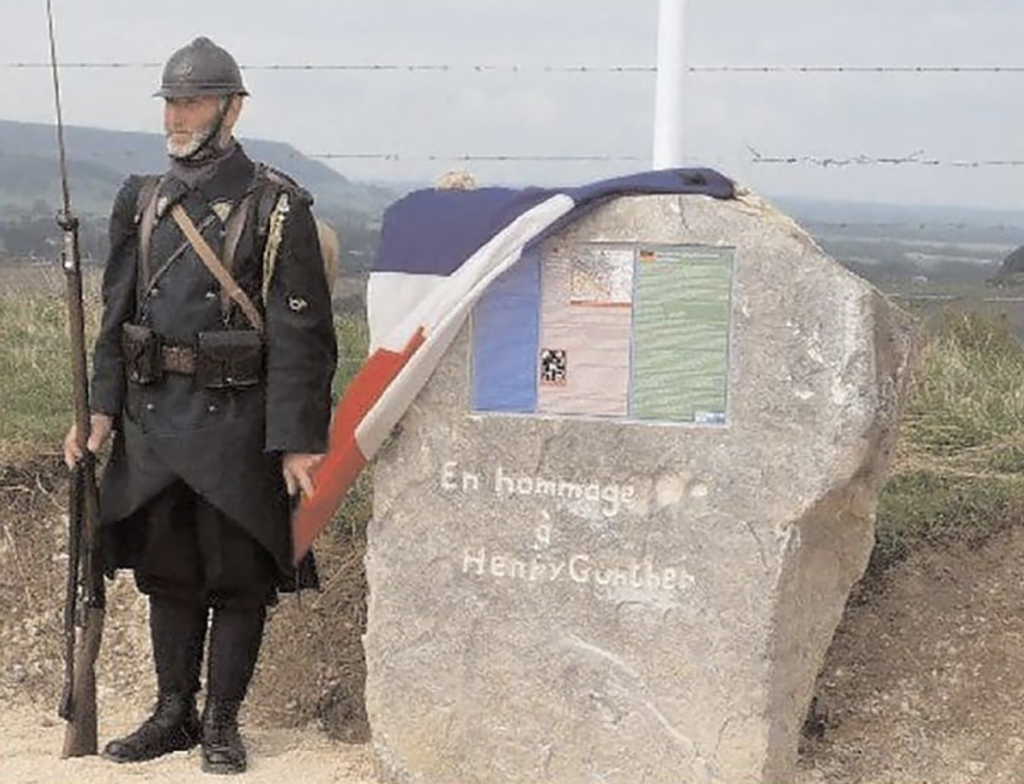