The Zig-Zag Clock: The Most Important WWII Artifact You’ve Never Heard Of

The Zig-Zag Clock: The Most Important WWII Artifact You’ve Never Heard Of 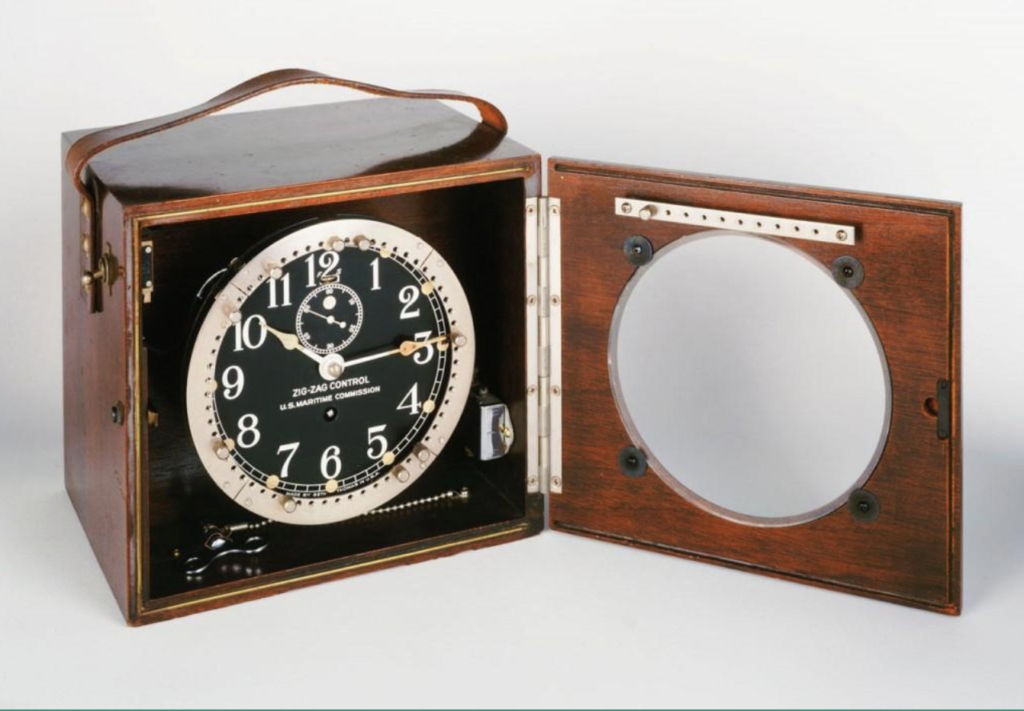 Last Wednesday morning, Vietnam veteran Clem Blazewick asked our Navy vets why ships zig-zagged across the Atlantic in World War II. The short answer is: “To evade German U-boats.” “But,” Clem pressed, “couldn’t you zig-zag into enemy submarines just as easily as away from them?” Turns out, you could, and naval experts warned about that when the zig-zagging concept was first developed in World War I.

Zig-zag sea routes came about in 1917 when German U-boats prowled the Atlantic  and North Sea. Instead of traveling in predictable straight lines, the British Royal Navy ordered groups of ships—convoys—to zig-zag their way to their destinations. Zig-zagging confounded the enemy’s efforts to track a convoy’s route, speed, range, and position. Submarine captains couldn’t be sure how to position their boats to fire their torpedoes with effect. Sailing with their British allies, US ships adopted the practice, which continued through World War II.

Zig-zagging dozens of ships in unison would be difficult enough under normal circumstances. Merchant and military ships have different maritime practices, as do different nationalities. Wartime communication restrictions made it even harder. Ships sailing into danger zones kept radio silence, extinguished signal lamps, and sometimes even stopped flag signaling. So, how did ships coordinate their movements so they didn’t run into each other?

The answer was to choreograph the entire ballet-at-sea ahead of time. Anti-submarine experts diagrammed zig-zag routes and assigned them to convoys, each assembled ship receiving the same detailed itinerary. Following the precise routes took excellent seamanship and the help of a device called a Zig-Zag Clock.

Each ship in the convoy had the same clock, synchronized with the flagship, and attached to an alarm system in the bridge. It looks like an ordinary clock except for the little metal pegs or clips around the rim that could be moved into different positions. When the minute hand swept past a peg, the alarm sounded, indicating both a speed and course change. Ten to twenty minutes later, it would sound again for another correction. And on it went for days at sea, each ship’s bridge buzzing or ringing in harmony to keep the convoy moving together.

The key was to produce as irregular and unpredictable zig-zag pattern as possible. Course corrections were set at angles between twenty and forty degrees, the time intervals between ten and twenty minutes, and the entire pattern was changed every forty to eighty minutes. Light, wind, weather, and sea states were all taken into account, and convoys could implement changes to the original zig-zag pattern when flagging conditions allowed.

Here is a colorful first-hand description of a convoy zig-zag operation during WWII:

This mighty collection of vessels, occupying ten or twelve square miles on the ocean, skillfully maintaining its formation, was really a beautiful and inspiring sight. When the destroyers had gained their designated positions . . . the splendid cavalcade sailed boldly into the area which formed the favorite hunting grounds for the submarine.

As soon as this danger zone was reached the whole aggregation, destroyers and merchant ships, began to zig-zag. The commodore on the flagship hoisted the signal “Zig-zag A,” and instantaneously the whole thirty-two ships began to turn twenty-five degrees to starboard. The great ships, usually cumbersome, made this simultaneous turn with all the deftness, and even with all the grace of school of fish into which one has suddenly cast a stone. All the way across the Atlantic they had been practicing such an evolution; most of them has already sailed through the danger zone more than once, so that the maneuver was by this time an old story. For ten or fifteen minutes they proceeded along this course, when immediately, like one vessel, the convoy turned twenty degrees to port, and started in a new direction. And so on for hours, now a few minutes to the right, now again straight ahead . . . This zig-zagging was carried out according to comprehensive plans which enabled the convoy to zig-zag for hours at a time without signals, the courses and the time on each course being designated in the particular plan ordered, all ships’ clocks being set exactly alike by time signal.

Did these magnificent examples of synchronized sailing actually work? Did zig-zagging across the ocean impede enemy submarine attacks? The answer seems to be yes, even after the Germans developed acoustically guided torpedoes that could home in on ship engines, regardless of course changes.

But the advantages of zig-zagging may have been marginal compared to the enormous effort it took to implement. Way back in 1918, when the US Navy first learned of the British sea evasion method, naval analysts produced a top secret report casting some doubt on zig-zagging’s efficacy.

While the analysts determined that, on balance, zig-zagging was better than straight line sailing, they also noted that it slowed the movement toward the destination, thus exposing ships to longer times in danger zones. The increased space covered by zig-zagging ships was also hazardous, giving enemy submarines more opportunities for attack. Finally, as Clem surmised, one could unknowingly zig straight into a “wolfpack” of submarines while intending to zag away from it.

All manner of guided missiles and torpedoes have rendered zig-zagging convoys of ships obsolete. The Zig-Zag Clock, once an indispensable tool of war, is now an obscure relic of a bygone age of sea power.