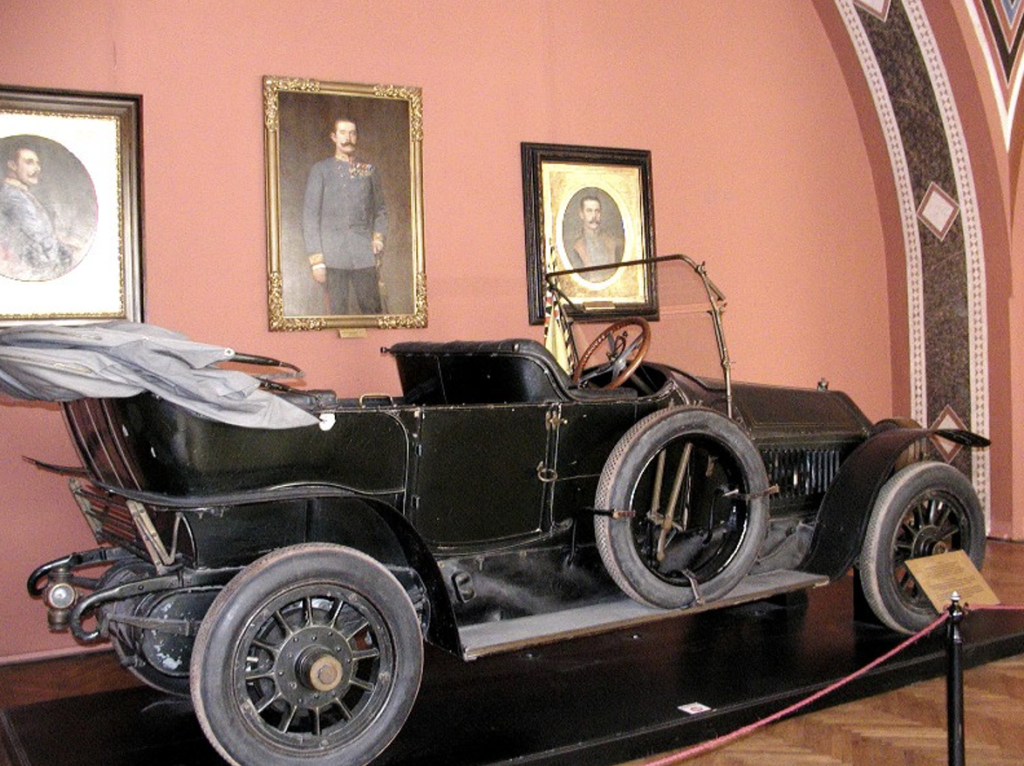 On June 28, 1914, a driver made a wrong turn in Sarajevo, and the world stumbled across an unseen geopolitical tripwire. A Gräf & Stift open-topped touring car stopped outside Schiller’s Delicatessen on Franz Josef Street. Inside the car were Archduke Franz-Ferdinand, the heir to the Austrio-Hungarian Throne, and his wife Sophia. They weren’t supposed to be there, so their driver stopped to turn around. Outside of Schiller’s (NOT inside eating a sandwich) stood a wan 19-year-old university student named Gavrilo Princip. Princip couldn’t believe his eyes. He pulled out his Browning 1910 pistol and fired two shots at point blank range. The world hasn’t been the same since. 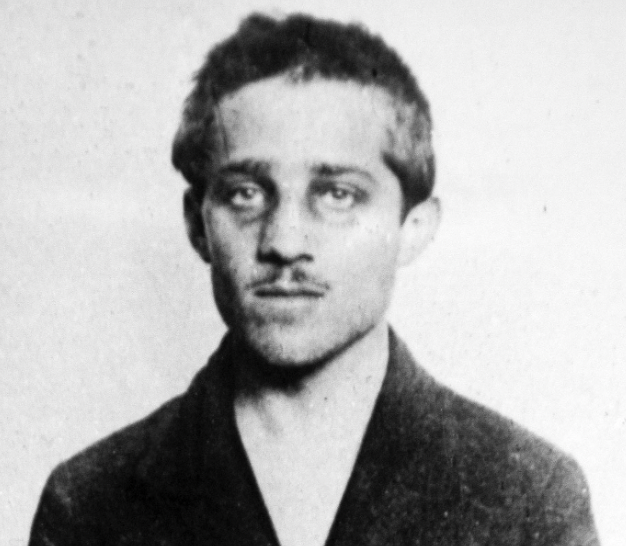 Sarajevo was the capital of Bosnia, a province of an empire that was slowly disintegrating. Ethnic groups there and across the empire were demanding independence. They protested, they marched, they terrorized. They formed underground groups funded in large part by the rival Russian Empire and the Kingdom of Serbia. Serbia in particular supported the Black Hand, a militant organization whose goal was to liberate Slavs living within the empire. In 1914, the Black Hand recruited Gavrilo Princip and five other would-be assassins for a special mission. 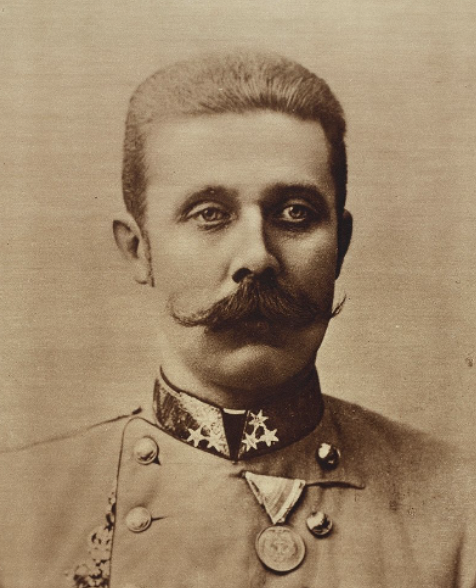 Franz-Ferdinand was the nephew of Franz-Joseph, who had been Emperor of Austria-Hungary for 66 years and sported the most impressive mustache in history. Franz-Joseph hated his nephew, the Archduke, not least because Franz-Ferdinand had committed a cardinal sin among royals: he married for love. Franz-Joseph tolerated the union but had never officially recognized it. He hadn’t attended the wedding, didn’t consider their children royals, and didn’t permit Sophia to appear publicly in an official capacity with the Archduke. 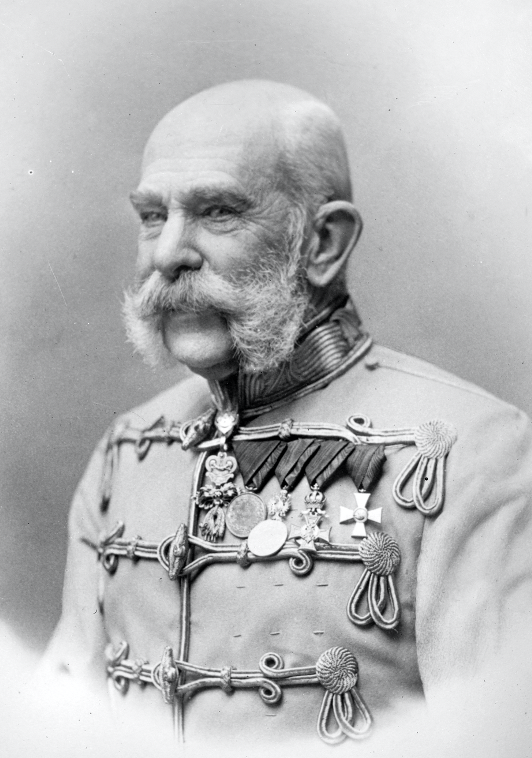 In 1914, the governor of Bosnia invited the Archduke to review Army troops in Sarajevo on June 28. Franz-Ferdinand saw in the invitation an opportunity to defy his uncle. Because he would review the troops as an imperial Army officer, not the Crown Prince, Franz-Ferdinand believed his beloved Sophia could accompany him and share the public spotlight with him. June 28 was, in fact, the couple’s wedding anniversary. The trip hundreds of miles from the imperial capital of Vienna would be an anniversary gift to Sophia.

But June 28 also held forebodings. It was St. Vitus Day, a Serbian national holiday. Sarajevo seethed with Serbian nationalist resentment against the empire. “There are assassins lying in wait for you,” the Archduke was told. But Franz Ferdinand waved off the danger. He disliked bodyguards and tight security.

The morning troop review itself went smoothly. The trouble began afterwards. Six cars processed toward City Hall along the Appel Quay, a riverside road through the center of town. The parade route was advertised in the paper, and crowds lined the sidewalks to see the imperial couple. Spread out along the road were six assassins of the Black Hand, each armed with a pistol, a grenade, and a vial of cyanide.

The Archduke’s car approached the first assassin, who got cold feet and didn’t fire. The second assassin also failed to act. He would later claim he felt people were watching him.

The motorcade approached the third assassin, Nedjelko Cabrinovic, who hurled his hand grenade at the Archduke’s car. It was a direct hit, striking the car’s folded back convertible cover right next to Archduke. But the assassin had failed to take into account the ten-second fuse. The grenade bounced innocuously off the convertible cover and landed on the street, exploding under the next car in the procession. Two passengers in that car were wounded.

As Franz Ferdinand and Sophia’s car sped off to City Hall, Cabrinovic downed his suicide vial and jumped into the river to drown. But the river was only four inches deep. And the cyanide was expired. Cabrinovic sprawled out in shallow water and vomited.

The remaining assassins took off. The youngest, 19-year-old Princip, walked to Schiller’s Delicatessen off Appel Quay on Franz Joseph Street.  He was a university student with tuberculosis. He was determined to put the little that was left of his life to good use by killing the Archduke. But now, with the assassination plot foiled, he contemplated suicide. 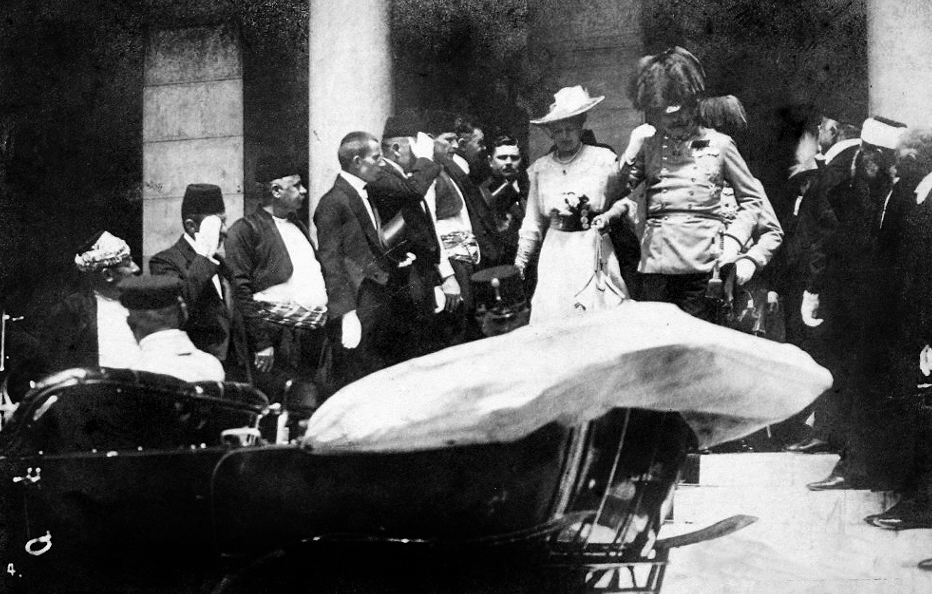 Franz Ferdinand and Sophia arrived at City Hall and endured a reception and speech by the mayor whom the Archduke blamed for the bomb thrower. The imperial security guards urged the Archduke to leave town immediately, fearing more attempts on his life. He waved the warnings off and ordered to be driven to the hospital to visit those wounded in the grenade attack.

The dignitaries saddled up, but the drivers weren’t told of the plans and assumed the procession would continue along the initial parade route. When the lead car left the Appel Quay and took a sudden turn on Franz Josef Street, the other cars followed. An official with the royal couple in the third car noticed the misdirection and called out for the procession to stop.

Princip was standing in front of Schiller’s, not having yet taken his cyanide. He looked up only to see an extravagant plumage of green ostrich feathers bobbing in the back seat of the Gräf & Stift phaeton. It was Franz Ferdinand’s imperial hat, paired with Sophia’s wide-brimmed white touring head covering. 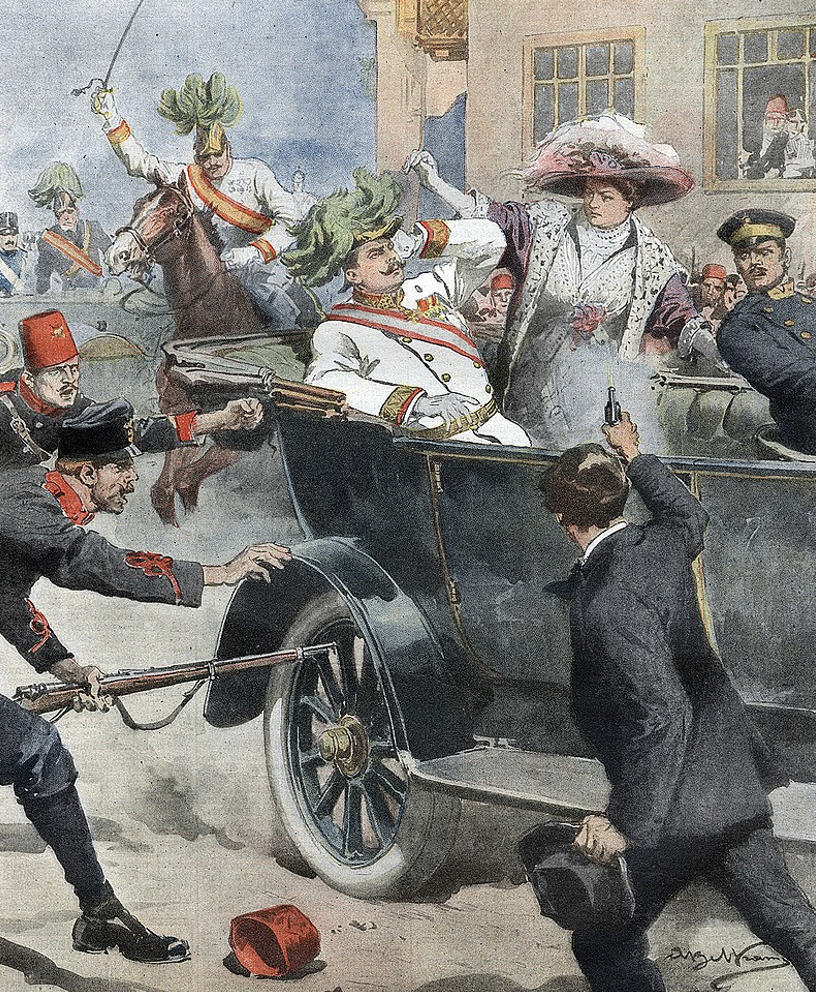 Braking had caused the Gräf & Stift to stall, and as the driver struggled to re-start it, Princip removed his pistol from his coat pocket, stepped on the car’s running board of the car and fired two shots. The first hit Franz Ferdinand in the neck severing his jugular. The second hit Sophia in the abdomen. “Sophie, Sophie!,” Franz Ferdinand cried, “Don’t die! Live for our children!” Sophie died minutes later, followed by the Archduke. 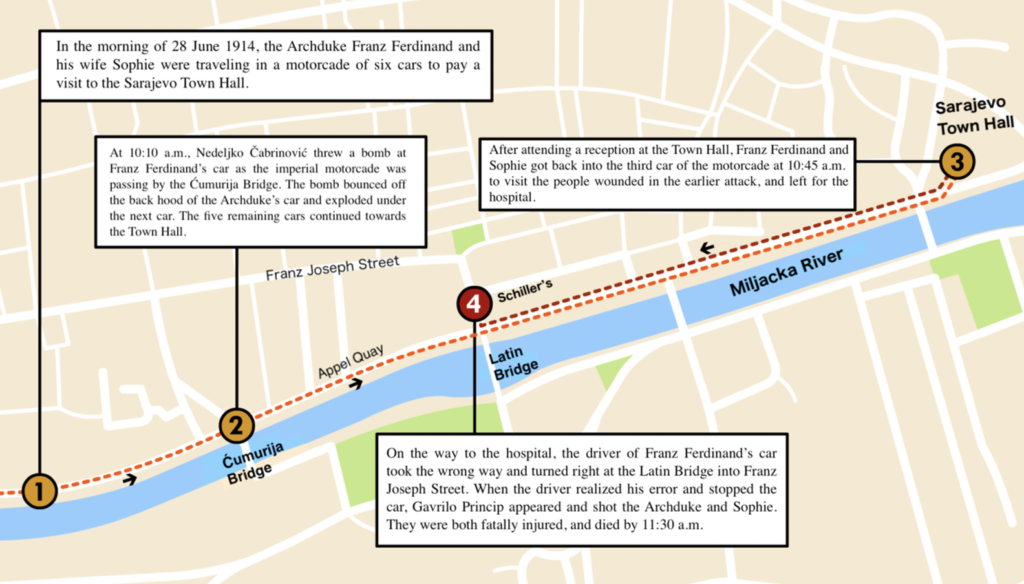 Emperor Franz Josef used the assassination as an occasion to eradicate the Serbian menace by conquering the Kingdom of Serbia. The alliance system, which had kept Europe’s Great Powers in rough balance, kicked into action, triggering a cascade of belligerence like the tipping of a domino. 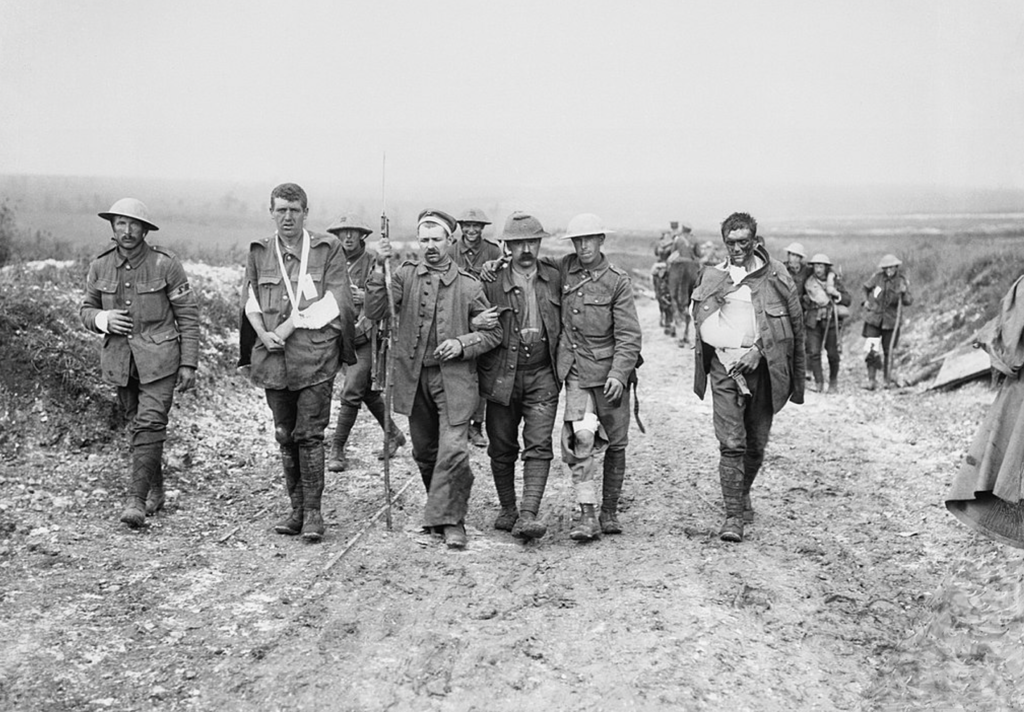 A German prisoner and British wounded walk to aid station during the Battle of the Somme, 1916.

By early August, almost all Europe was at war. Four years later, over 20 million would be dead. Four empires would lay in ruins. Violent revolution would overthrow governments from the eastern border of France to the Sea of Japan.

But World War I was just the beginning of what was, in truth, a Thirty Years War ending in 1945. Without World War I, there never would have been a Great Depression, fascist dictators, global Communism, World War II, the Korean War, the Vietnam War, or the Cold War. World War I made all this possible. It was the Pandora’s Box from which the demons of the 20th Century were unleashed.

And it all began with a wrong turn. It’s humbling to know the minutiae on which history turns.