Why March 29 Is Vietnam Veterans Day 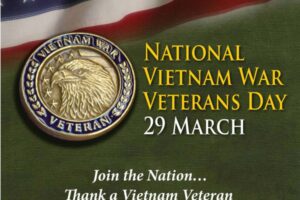 Vietnam Veterans are special. They’re the only veterans who have holiday dedicated to them. March 29 is designated as National Vietnam War Veterans Day. And the reason Vietnam Veterans have been singled out for celebration is because of the special trauma they suffered, not in the war, but upon their homecoming.

Vietnam Veterans fought a long, brutal, and, over time, increasingly unpopular war. It was also politically unsuccessful. So, when the veterans returned home, they were met by an ungrateful nation that seemed to blame the warriors for a war Americans didn’t like. Coming home from war, even in triumph, is hard enough. But returning to a hostile homefront inflicts more pain than many can bear.

That special pain has shaped our Vietnam Veterans. It has made them who they are today. And who they are is something extraordinary.

That’s why Vietnam Veterans are honored with our own special day.

But why March 29? What was that day selected as Vietnam Veterans Day? 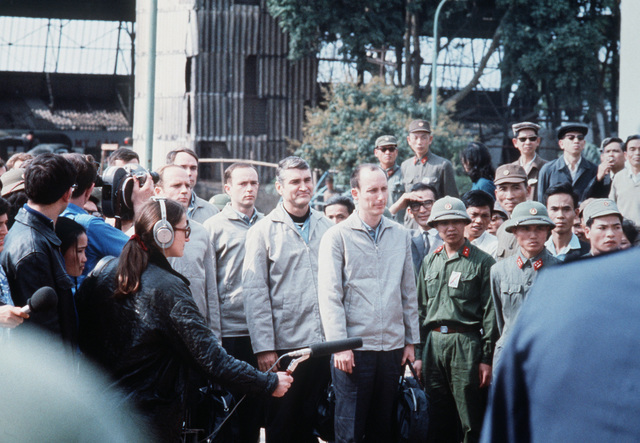 American POWs lined up at Gia Lan Airport, surrounded by North Vietnamese military, public and press, prior to being turned over to the U.S. delegation in 1973 under the terms of the Paris Peace Treaty.

The puzzle of the date is an emblem of the larger problem of the Vietnam War in our collective memory. Vietnam is a difficult war to commemorate. Even historians have a hard time determining when it began or even precisely ended.

The American Civil War, by comparison, is easy to date: it began on April 12, 1861, with the firing upon Fort Sumter, and it ended four years later on April 9 with the Surrender at Appomattox. Similarly, we all know that World War II began for this country on December 7, 1941 and ended with the Japanese Surrender on August 14, 1945.

Vietnam doesn’t have such neat bookends. Or rather, it has too many bookends. The war sprawled across decades with varying intensity. One could say the war began in 1946, when the US first aided the French effort to take back their colony against Ho Chi Minh’s independence movement. Or, you could point to 1954, when the French pulled out of Vietnam and handed over the struggle against Ho to the US.

The following year, 1955, the US ramped up its support for the Republic of Vietnam, an independent non-Communist government in the South. The air war against North Vietnam began in 1964. US ground operations were authorized and launched in 1965. Which of these dates marks the true beginning?

When I taught the Vietnam War, I told my students to consider March 8, 1965 as a handy “start date” of what we think of as the Vietnam War. That was the date that 3,500 Marines from the 9th Expeditionary Brigade landed on Red Beach Da Nang. They were the first US troops officially authorized to conduct offensive operations on the ground in Vietnam. These Marines kicked off a policy of “escalation,” gradually increasing the fight against Viet Cong insurgents and their North Vietnam Army allies. Escalation ended up drawing out the agony of Vietnam. It failed to win the war. Saddled with negative connotations, March 8 would be an unworthy date for honoring our Vietnam Veterans.

The end of the Vietnam War is much clearer. On April 30, 1975, Saigon fell to Communist forces, marking North Vietnam’s final triumph over the US-backed government of South Vietnam.

But by that time, the US had withdrawn from the fighting. And April 30 stands as a date of mourning for many Vietnam Veterans. It was the day that the ultimate political goal of the war—to maintain South Vietnam’s independence from the North–was irretrievably lost. Not a good day to honor US veterans of that war.

What about other important dates of the war? January 31, 1968, when the Tet Offensive began? Or the Cambodian Invasion of April 29, 1970? Or the Operation Linebacker I air campaign in the spring of 1972 or Linebacker II the following December?

None of these will do as commemorative events. Each battle or operation associated with these dates was divisive. Each sparked dissension at home. And whatever tactical success they achieved ended up being overshadowed by the strategic defeat that followed.

Without an unambiguously positive battle or surrender date to commemorate, we’re left with the more obscure date of March 29, 1973. What happened on that date inspired the creation of National Vietnam War Veterans Day.

March 29 was the date specified in the “Agreement on ending the war and restoring peace in Viet-Nam,” the treaty signed in Paris between the United States and North Vietnam (along with the Viet Cong and South Vietnam) on January 27, 1973. The Paris Peace Treaty stated plainly that the US would conduct “a total withdrawal from South Viet-Nam of troops, military advisers, and military personnel” within sixty days. In other words, American forces would exit the country by March 29.

And, in fact, on March 29, 1973, American forces officially deactivated the Military Assistance Command-Vietnam—MACV—which had guided the US war effort since 1962. 23,000 remaining service members furled unit flags, packed belongings, and filed aboard airplanes and helicopters for flights out of country. Only some civilian advisors and Marine guards for the embassy stayed behind.

March 29 is a good choice for Vietnam Veterans Day. It focuses attention on the homecoming, the distinct experience that defines the Vietnam War generation of veterans. It gives us a chance to say “Welcome Home” to a group of veterans who never got the reception they deserved when they returned to the United States.

Dark days followed March 29, 1973, both in Vietnam and here in the US. But commemorations like Vietnam Veterans Day have a healing power, even these many years later. And that should be our focus this day.