Your Simple Guide to Military Tattoo Policies for 2021-2022

No military regulation has been more closely watched—and more frequently changed—than the do’s and don’ts of tattoos. Last week, the Marine Corps revised its policy, allowing the “sleeve” (whole arm) tattoo and also permitting officers more than four tattoos visible in uniform. Both officers and enlisted can now tat themselves up as much as they want, as long as it’s not on the face or neck. And hands may sport only one finger ring tattoo. The reason for the change is simple: recruiting and retention. Nearly half of young adults have tattoos, and many have several. The new “Marine Corps Bulletin 1020” emphasizes balance between decorum and practicality: “The American people expect Marines to be disciplined, physically fit, and ready to accomplish any mission. They also expect Marines to represent the nation they are sworn to protect.”

The new policy, the bulletin goes on to say, “ensures that the Marine Corps maintains its ties to the society it represents and removes all barriers to entry for those members of society wishing to join its ranks.”

With the new Marine Corps policy, the service branches’ regulations on tattoos are now nearly identical. If you’re curious about these rules—and the slight variations among them–here’s an updated comprehensive guide: All five major branches of service agree that there must be no tattoos on these body parts:

Neck: The Navy is the only branch to allow a single neck tattoo. One neck tattoo, no larger than 1-inch in diameter, is permitted.

All other branches prohibit neck tattoos visible above a crew neck shirt.

The Marine Corps goes so far as to specify: “the neck is defined as the portion of the body above the collarbone in the front area, above the seventh cervical vertebrae (C7) in the back area.”

Hands: All the service branches prohibit hand tattoos. But they all have minor exceptions to this rule. 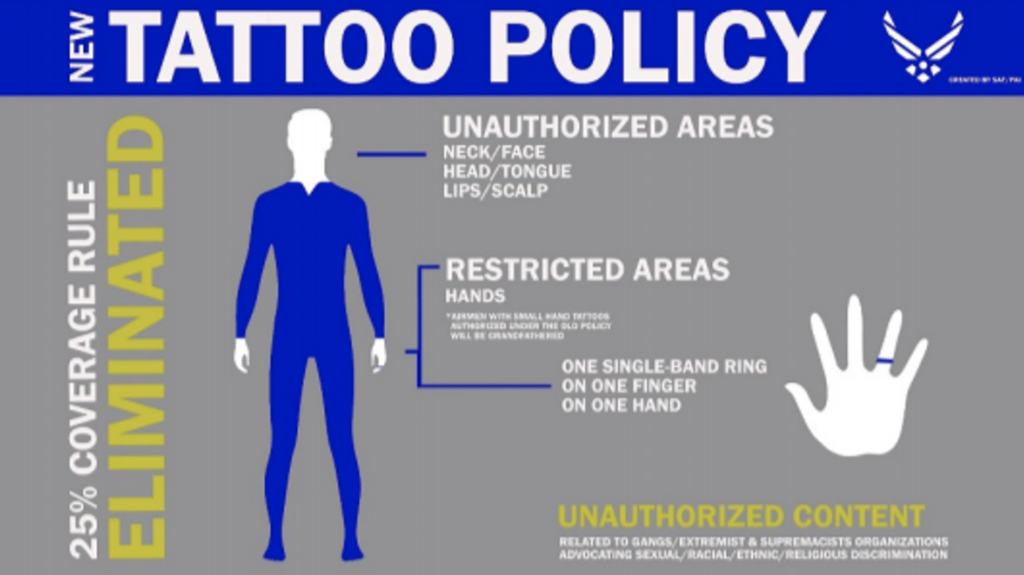 The Air Force allows a single finger ring tattoo on one hand only.

The Coast Guard is the only service branch that permits one other hand tattoo. This second kind is allowed between the wrist and first knuckle, as long as it’s not bigger than 1 inch in diameter.

These few restrictions mean that almost anything goes in the military in 2021-2022 with regards to tattoos. 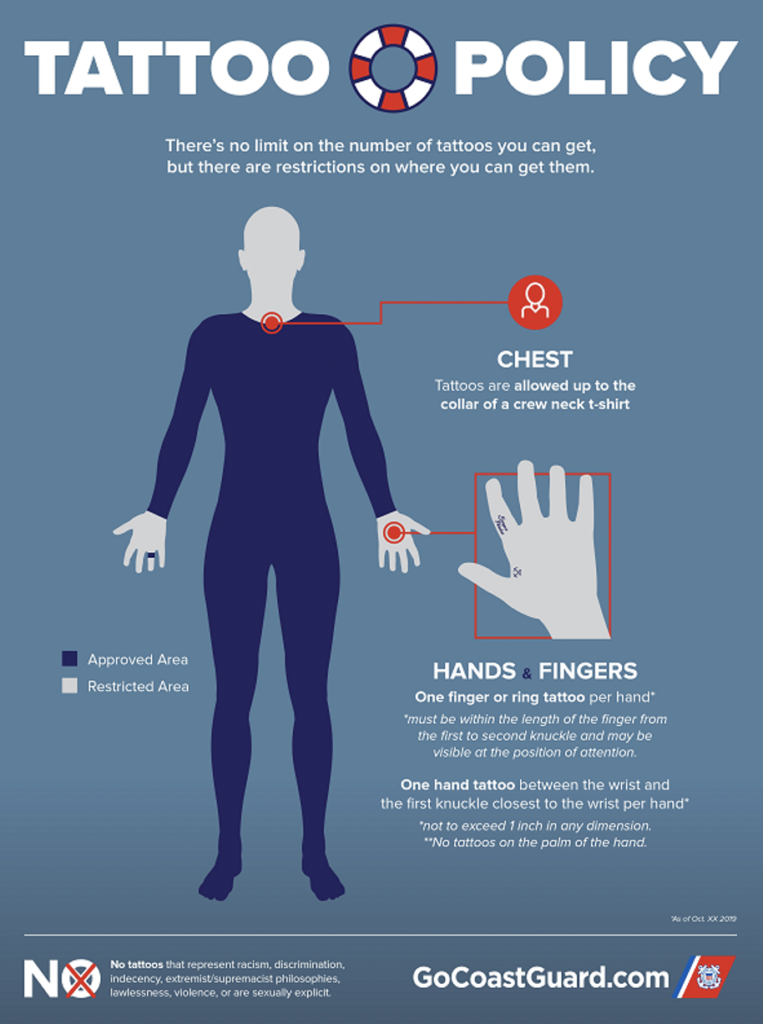 It used to be that service branches banned tattoos exceeding 25% of the body parts they decorated. There were also prohibitions on tattoos below the knees or ankles and separate policies for officers and enlisted.

When it comes to tattoos’ content, however, the military has elaborated on longstanding prohibitions. Put simply, Service Members cannot sport tattoos that are:

Tattoos may also not:

Each branch specifies these prohibitions a bit differently. The Coast Guard, for example, bans expressions of “Violence” and “Lawlessness.”

The Air Force condemns designs “that are prejudicial to good order and discipline, or of a nature that may bring discredit upon the Air Force.”

The new Marine Corps policy emphasizes an expanded definition of “terrorism” to include the domestic kind, Tattoos may not “advocate, engage in, or support the forceful, violent, unconstitutional, or otherwise unlawful overthrow of the government of the United States, any state, commonwealth, district, or territory of the United States.”

All this means that interpretation must come into play when scrutinizing tattoos. The level scrutiny rises from commanding officers up to the highest levels at the DoD.

Finally, all the service branches have something to say about other forms of body art, including branding, burning, scarring or mutilation. As the Coast Guard puts it, sailors may not have “intentional alterations and/or modifications to a member’s body (e.g. scarring, excessive ear piercing/stretching, tongue splitting, beneath the skin decorative implants, decorative tooth plating/engraving, etc.).”

For more information about the latest dress and appearance regulations of each service branch, see:

“Wear and Appearance of US Army Uniforms and Insignia”