Do You Know These Donut Dollies of Vietnam?

Do You Know These Donut Dollies of Vietnam? 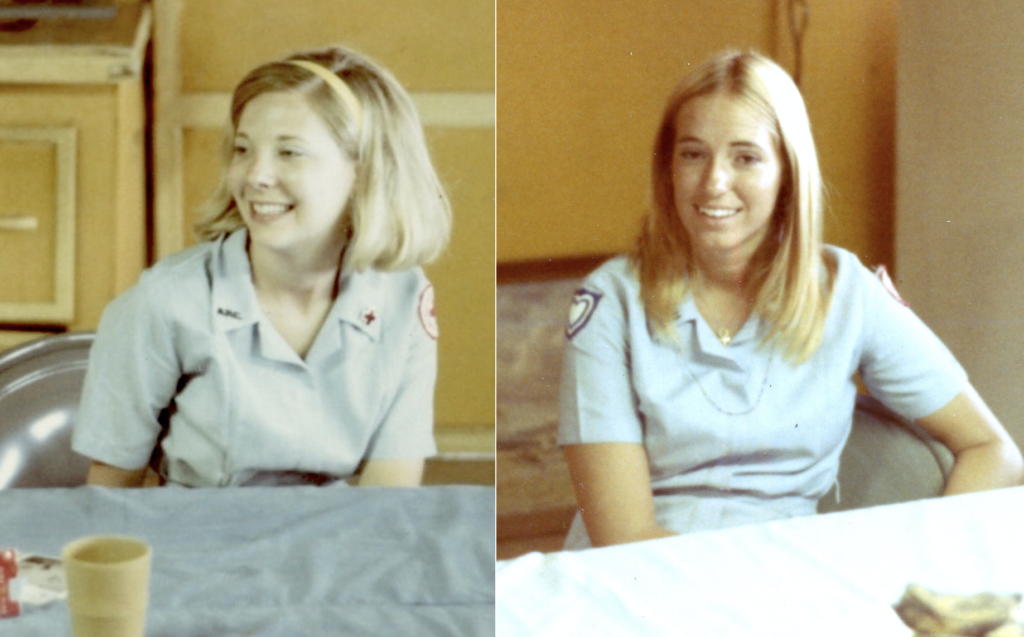 One morning in 1971 in a village in Binh Phuoc province, South Vietnam, Jim Roberts’ Mobile Advisory Team received a call about an incoming helicopter. Jim and two team members set out for the helipad and watched as the pilot flared his descent and settled gently on the pad’s painted white “H.” Here is Jim’s account of what followed:

Not sure what to expect, we stood our ground as the rotor blades gradually stopped spinning. A jungle fatigue clad figure climbed down out of the cabin. Even from our distance we could see that his fatigues were almost their original green color, neat, pressed and possibly starched. He was not a “bush” soldier. As he turned to help another person to climb out — then a second person.

These two people were not wearing green jungle fatigues. They wore light blue dresses . . .  and had blond hair. What was going on?

They were so-called Red Cross “Donut Dollies.” During World War II, adventurous women volunteered to work in the European Theater of Operations in positions that came to be known as Donut Dollies. Working in teams of two, they were assigned to a mobile kitchen. Their job was to wake up in the middle of the night, go to the kitchen and make hundreds of donuts and gallons of coffee. Then they would drive to someplace in the rear area just behind the front lines and serve coffee, donuts, and conversations to the GIs who were resting before moving back up to the front and the fighting.

The Dollies served as a major morale booster for the war weary troops. They served again in Korea, and over 600 of them found their way to Vietnam in the 1960s and early 1970s. Since there were no frontlines in Vietnam, instead of driving mobile kitchens, they traveled by helicopter. This meant that there were no donuts — just the Dollies.

Our village, Dong Xoai ,was at an important intersection of roads running north from Ben Hoa to the Cambodian border and east From Tay Ninh. The village had five hamlets and a former Special Forces Camp that was now the home of the District Advisory Team of four men and MAT 111 composed of five men.

Because of its location, Dong Xoai was militarily significant but, unfortunately, it would never rate a visit by the Donut Dollies. There were larger concentrations of troops in other locations better served by the too few Dollies.

But there they were, walking towards us. The jungle fatigue clad figure, a Lieutenant who was not wearing Infantry insignia on his collar put out his hand to shake ours. We really did not see him. We were transfixed by the two women walking next to him. They looked at us and one said, “Hello, I hope we are not interrupting anything.”

The sound of an American woman’s voice. I’m not sure what the reply was or if it was even coherent. We shook hands all around ,and the Lieutenant, their escort, explained that the three of them were heading to a fire base to visit the soldiers when the helicopter developed some sort of mechanical problem. The pilot decided to land at the nearest camp (ours) and leave the three of them while they returned to base to either have the problem fixed or get another helicopter. If the ship did go down on the way back to base, the crew did not want to endanger the passengers. As we turned to walk back to our team house, the blades spun up and the helicopter lifted off heading to the South.

We talked as we walked back to the team house. After giving them a brief tour, we sat at the table in the dining area and talked some more — to be totally honest I do not remember what we talked about. I just remember listening to their voices. Their speech did not have the sing-song tonal accents of the Vietnamese language. It was so different, so pleasant — and so memorable. They stayed long enough to eat lunch with us — nothing special — just whatever our cook prepared.

Eventually, we received a call from their returning helicopter. We all walked to the landing pad and waited for the ship to land. We shook hands and watched them walk to the waiting chopper. They boarded and the pilot lifted off — and they were gone. I don’t think anyone talked as we walked back to the team house.

Forty-nine years later, the American Red Cross Overseas Association (ARCOA) – the Donut Dollies – had its annual convention in Pittsburgh. The Veterans Breakfast Club arranged for an event with the Dollies to talk about their experiences in Vietnam.

I attended the event and showed these two photos, hoping these women were in the audience or could be identified by others. The former Dollies asked me why I wanted to contact them, and I replied, “I just wanted to thank them for their visit and for turning just another day in Vietnam into something to remember.”

Unfortunately, no one knew who these Dollies were. ARCOA even posted these photos on their Facebook page. But no leads yet. If anyone recognizes these two, please contact the Veterans Breakfast Club!