When Veterans Stormed the Capital: The March of the Bonus Army of 1932, part 1

When Veterans Stormed the Capital: The March of the Bonus Army of 1932, part 1

On July 28, 1932, General Douglas MacArthur, with Majors George S. Patton and Dwight D. Eisenhower, drove thousands of protesting World War I veterans out of Washington, DC, by force. The trauma of the “Bonus March” would inspire the GI Bill during World War II.

The March of the Bonus Army in 1932 pitted 45,000 World War I veterans and their families against the United States government during the depths of the Great Depression. The veterans had marched on Washington to demand early payment of a “bonus” due to them in 1945 for their service in the Great War. The White House and the Army saw the marchers as a threat and schemed to drive them from the nation’s capital.

The story features some already famous people, like President Herbert Hoover and Chief of Staff of the United States Army Douglas MacArthur. It also previews some soon-to-be celebrities, such as Majors Dwight D. Eisenhower and George S. Patton. This first of a two-part post details the background to the violence of July 28, 1932.

The drama played out months before one of the most important elections in American history. It’s not too much of an exaggeration to claim that the Bonus March sealed the fate of Herbert Hoover and paved the way for Franklin D. Roosevelt’s New Deal.

To understand the Bonus March, you need to go back to 1917.When the US declared war on Germany on April 6th of that year, the US Army counted fewer than 200,000 soldiers. It would soon balloon to over 4 million due to something called the Selective Service, the first modern draft. 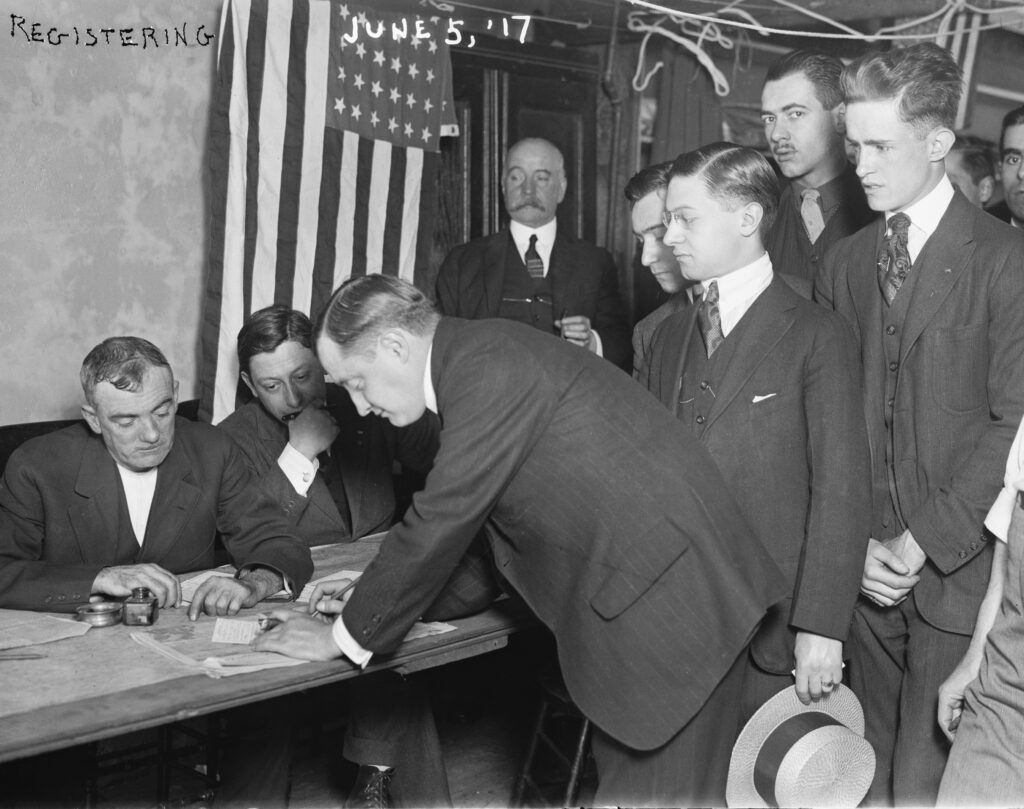 Two million of those selected for military service crowded onto giant troopships and headed overseas to France. Over the next year or so of combat, 112,000 of those US service members would die, half of the Spanish Flu. But American power had tipped the scales, broken the trench war stalemate, and forced Germany’s capitulation on November 11, 1918.

The doughboys, as they were called, came back to parades and victory celebrations. But, just as disillusionment over the war emerged in 1919 with the Versailles Treaty and “the peace to end all peace,” so did awareness dawn that those who had been selected to work in industry earned ten times the amount of money or more than those who had shipped overseas. 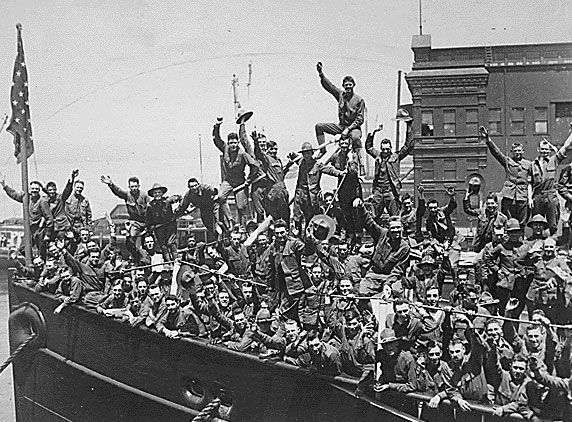 US recruits heading to France, 1918

In 1924, Congress sought to repair this imbalance by passing the World War Service Adjusted Compensation Act, which awarded veterans $1 a day for every day spent in uniform in the US and $1.25 for each day overseas.  By compounding interest over time, the act promised to deliver a one-time payment of $500-$1000 to every former doughboy.

There was one catch: the money wouldn’t be paid immediately. The veterans had to wait until 1945 to receive the check.

This was, as you can imagine, an expensive proposition. Detractors didn’t call it “adjusted compensation.” They called it a “bonus.” The nickname stuck. Soon, everyone in America was aware of the World War I bonus payment coming due in twenty-one years.

In 1924, few groused about having to wait so long for payment. It was the Roaring Twenties, and the economy was booming. Herbert Hoover won the White House in 1928 with a campaign slogan “a chicken in very pot and two cars in every garage.”

“We in America are nearer to the financial triumph over poverty than ever before in the history of our land,” proclaimed Hoover a month before his election.

A year later, as we all know, the stock market collapsed, and Hoover was proven tragically wrong. Every week, month, year, seemed to deepen the economic morass. By 1932, the unemployment rate scudded to 25%. The nation was in crisis. 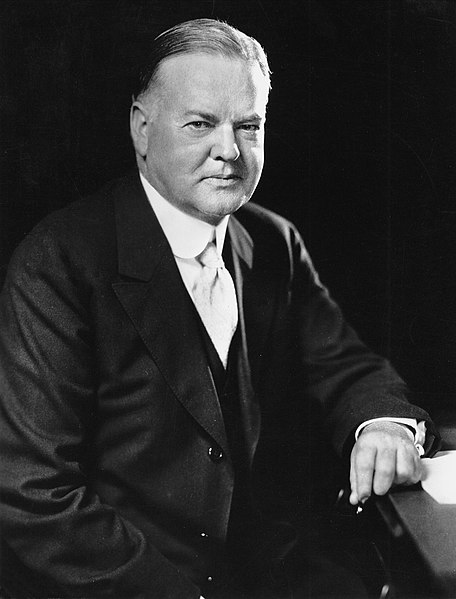 Hoover’s response, in retrospect, was too little, too late. But, to be fair, there was no template for the kind of executive action needed because there had never been an economic collapse so severe. The old assumptions and outdated dogmas of the past–to paraphrase Lincoln–were inadequate for the stormy present. Hoover’s Reconstruction Finance Corporation was no where near big enough or generous enough to make any difference. In his December 2, 1930 Message to Congress, Hoover declared, “Economic depression cannot be cured by legislative action or executive pronouncement.”

In other words, there was nothing to be done. The invisible hand of the market would have to work out the cure on its own timetable. Government could do nothing.

When government fails to respond to crisis, people search elsewhere for answers. This was especially true during the Great Depression, when mainstream state solutions didn’t scale to the problem. When the political center collapses, the fringes come to life. Radical elements on the Left and the Right gain in prestige and popularity. What once seemed crackpot no longer appears so crazy.

In the 1930s, the Communist Party rose to unprecedented prominence right here in the Land of Liberty. Most American cities had Communist Party halls.  There you could go, get a cup a coffee and a sandwich and maybe listen to a lecture about the failure of capitalism and the need for a new system. The Communist Party of America sponsored Hunger Marches and unemployment demonstrations that drew hundreds of thousands of people. Similar movements rocked Europe and even Japan.

Opposing Communists everywhere were the Fascists, who occupied the other end of the political spectrum. In Italy, they were called the Black Shirts and led by Benito Mussolini. In Britain, OswaldMosley led his own Black Shirt legion, while in Germany, the preferred shirt color was brown, and the leader was Adolf Hitler.

Unemployed Americans rallied in Blue Shirts and found a leader in a Pittsburgh priest named Father James Cox. In January 1932, Father Cox, who was no fascist in terms of ideology, nonetheless borrowed from the right-wing movement’s stylings. in a march of 25,000 on Washington to demand a public works program and 70% inheritance tax. Colored shirts and extended right arm salutes lent a militaristic air to Cox’s Army.

There was an ominous feeling in the air. The country seemed on the edge of something seismic. If you were to ask Americans in 1932 where the nation would be in five years, most would answer, “revolution.”

Some in Congress were aware of the need to do something big. In early 1932, Texas Congressman Wright Patman, a populist Democrat, introduced a bill calling for the federal government to pay out the World War I adjusted compensation “bonus” immediately instead of waiting until 1945.

It wasn’t a bad idea. Poor families of veterans would receive a much-needed infusion of cash. But the bill was also good on a macro level. The Depression was a deflationary crisis. Prices fell because demand was low. What was needed was stimulus, and the Bonus would have provided a $2.4 billion boost to spending.

President Hoover vowed to veto it on account of the enormous expense. Hoover wasn’t alone in opposition the bill. Republicans and many of Patman’s fellow Democrats also disapproved of the scheme and the deficit spending it would require. So, as with so many measures, the bill died in committee.

Across the country in Portland, Oregon, a World War I veteran named Walter W. Waters heard about the so-called Bonus Bill and grew interested in it. That interest swelled into an obsession.

For someone who triggered a history-making event, Walter Waters remains surprisingly mysterious. We know he was from Portland, Oregon, and was an infantry sergeant who saw combat, including poison gas. We also know he came home a changed man and drifted from job to job. He seemed unable to settle down or keep a household. In 1925, he changed his name to “Bill Kincaid,” hoping, he said, to turn his luck. The Depression killed whatever promise of recovery he seemed to entertain. On March 15, 1932, when he attended a veterans meeting in Portland, Waters was just another down-and-out American, an unemployed cannery worker ready to turn full-time hobo. He stood up that evening and made a bold proposition to the glowering men. Every one of us, he declared, should hop a freight train and ride to Washington to demand in-person the money due to us for our service overseas!

It says everything about the dire state of the country that the men not only agreed with Waters, but pledged to join him on his trek. Over the next two months, Waters recruited some 300 veterans to make the journey.

On May 11, the men boarded empty boxcars still reeking of cow manure and began their cross-country trip as the Bonus Expeditionary Force (BEF). They had, on average, 30 cents a piece. But they were helped all along the way, first by railroad employees– conductors, brakemen, yardmen—who facilitated their transit. Then, by the townspeople they met as they made their way East.

By the time the “Bonus Army” reached Chicago, it had caught the nation’s attention. The media loved everything about it. Here were 300 men standing for the 2 million other Americans who were on the road and dispossessed not only of their worldly goods but of their faith in the American promise. Here were men on the move, heading to the seat of government, poor but determined, hungry but defiant. In short, Waters and the veterans were inspiring. And as they passed through the country’s heartland, they took on other desperate recruits with nothing to lose.

Commander Waters’ ragtag Army swelled but maintained strict military discipline. Each man had a rank and a job.

They were full-blown, Depression-born celebrities. Then, something amazing happened. As the Portland BEF chugged across the country, other groups of veterans and their families packed up their belongings and started heading toward Washington. These copycats come from every corner of the country: New England and New Mexico, Pittsburgh and West Virginia, with huge numbers from southern California. Veterans caught freights, piled into jalopies and hitchhiked to the nation’s capital.  By the time Waters and the Portland BEF arrived on May 29, there already 10,000 Bonus Marchers in Washingon.

It was only the beginning. For more, see part two.