Skip to content
When Veterans Stormed the Capital: The March of the Bonus Army of 1932, part 2
← BACK TO VBC BLOG

When Veterans Stormed the Capital: The March of the Bonus Army of 1932, part 2

On July 28, 1932, General Douglas MacArthur, with Majors George S. Patton and Dwight D. Eisenhower, drove thousands of protesting World War I veterans out of Washington, DC, by force. The trauma of the “Bonus March” would inspire the GI Bill during World War II.

In May 1932, as we saw in part one, poor World War I veterans and their families began pouring into Washington, DC, to lobby the federal government for an early payment of their “Bonus,” the adjusted compensation due to them in 1945 for their military service in the Great War.

The veterans first settled into a row of condemned buildings along Pennsylvania Ave between the White House and the Capitol.  But they soon ran out of space there.  As more men, women, and children arrived in Washington, the Bonus Army took over a section of shore across the Anacostia River from the Capitol. This flood plain or mud flats became the headquarters and main camp of the Bonus Army.

At least 25,000 people pitched tents and built shacks. They laid out streets, put up fences, and began improving their homes. The Bonus encampment became a spectacle in itself. People came from all over the country and the world came to see it.

It was a sight that defied stereotypes of disorderly mobs or degenerate rabble. The camp was orderly and disciplined. Under Walter Waters’ watchful eye, military protocol prevailed.  Waters made sure every new arrival got registered and that only veterans and their families lived in the camp.  There were mess halls and latrines, parade grounds and chapels. There were even schools for the children. In a Depression-wracked nation dotted with homeless camps, nicknamed ‘Hoovervilles” in cutting reference to the President, the Bonus Army was a model community of the down-and-out. 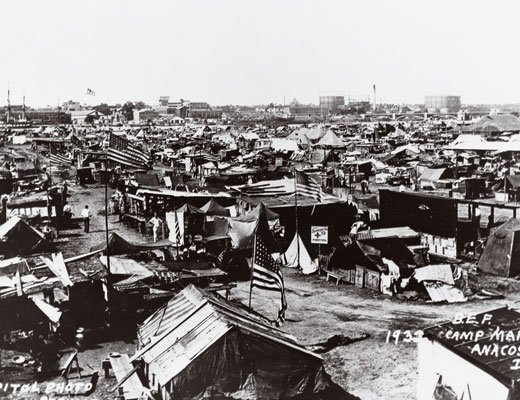 Law enforcement, of course, kept a watchful eye on the ragtag assemblage. Luckily for the Bonus Marchers, the Chief of Washington, DC Police was Pelham Glassford, a tall, commanding man who had been a Brigadier General in World War I.  Glassford had tremendous sympathy for the protest and saw himself as an ally of the movement, even as he worked to protect the DC community against any of its pernicious effects. 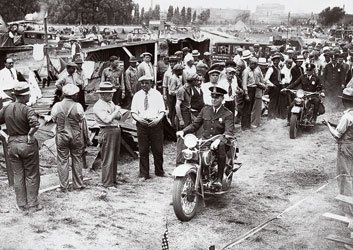 Glassford partnered with Waters to keep order. He helped to lay out camp in Anacostia and reached into his own pocket to supply the Marchers with food, blankets, medicine, and building materials.  He recruited wealthy Washingtonians to contribute to the Bonus Army’s upkeep.  One such supporter was socialite Evelyn Walsh MacLean, who provided thousands of dollars worth of provisions for protesters.  She donated 150-pound turtles to make soup and enough pork to make barbecue for 1,500 vets and their families.  She had 1,000 cups of coffee delivered each day. (She could afford it. She owned the Hope Diamond.)

Meanwhile, Chief Glassford arranged ongoing fundraisers for the marchers. There were boxing matches and sporting events, concerts, flag sitters, magic shows, and plays all to raise money.  The owner of a burlesque house staged a special strip show as a benefit.

Most controversial thing about the Bonus Army was its racial politics. In a country where its military was strictly segregated, the Bonus Army and the camps were completely integrated.  Roy Wilkins, who would later head the NAACP, was a young reporter for the black press. He visited the camp and wrote: “There I found black toes and white toes sticking out side by side from a ramshackle town of pup tents, packing crates and tar paper shacks.  Black men and white men, veterans of the segregated army that had fought in WWI, lined up equally.”

To Director of the FBI J. Edgar Hoover to Army Chief of Staff Douglas MacArthur, such racial integration was a sign that the Bonus Marchers were subversives, probably Communists. One of J. Edgar Hoover’s agents reported: “We observe Negroes and people with Jewish features among the marchers.”

Army intelligence and FBI agents issued frightening reports to the White House that the Bonus Army was the vanguard of a revolutionary group harboring plans to take over Washington and overthrow the nation’s government.  MacArthur ordered soldiers stationed at nearby Fort Myers to ready themselves to fight a civil insurrection.

As MacArthur prepared for battle, the House of Representatives pulled the Wright Patman Bonus Bill out of committee and put it up for a vote.  On June 15, the House passed the bill by a small margin, and the Bonus Marchers were jubilant. It seemed as though Promised Land was in sight: the adjusted compensation due to the veterans might be paid immediately, instead of having to wait until 1945.

The marchers held vigil outside the Senate for two days as that chamber debated the bill.  At 9:30pm on June 17, a Senate aide passed news to Walter Waters: the Senate had voted to table the bill by an overwhelming majority. It would not be taken up again until 1933.

With the failure of the Bonus Bill, the White House made plans to move the Bonus Army out of the city. President Hoover put up $100,000 of his own money to give marchers free transportation home.  The problem was: most of protesters didn’t have homes.  That’s why they were in Washington.  Only about 25% of the Bonus Army took up Hoover’s offer.  The rest remained with Waters, who pledged to stay in DC until 1945 if needed.

On July 28, Chief Pelham Glassford received orders from the Commissioners of Washington, DC, to evict the Bonus Marchers living in condemned buildings on Pennsylvania Avenue. The block was slated for redevelopment, and the buildings had to be emptied.

Glassford and his officers reluctantly approached the buildings and told their inhabitants they had to leave. The Marchers protested, shouting Pelham had betrayed them. A few picked up bricks and threw them at the officers, striking one in the head. Another Marcher stepped up to Glassford and ripped the badge off his uniform.

As the melee swelled, some police officers opened fire, killing one veteran instantly and mortally wounding another. The Bonus March was now officially a “riot.”

The DC Board of Commissioners immediately contacted President Hoover and request federal assistance in clearing Pennsylvania Avenue.  Hoover passed the order along to MacArthur, requesting he use the Army:

“You will have United States troops proceed immediately to the scene of the disorder. Surround the affected area and clear it without delay. Any women and children should be accorded every consideration and kindness. Use all humanity consistent with the execution of this order.”

MacArthur called up 600 soldiers from Fort Myers, a full brigade, and trucked them to Pennsylvania Avenue. General MacArthur arrived on the scene at 4:30pm to personally direct the operation.  He didn’t want to remain back at headquarters, as commanders usually do in situations like this. MacArthur’s aide, Major Dwight D. Eisenhower, pleaded with his boss to remain behind. Things could get ugly, he said. But MacArthur would have none of it. He wanted to see it all unfold as he wanted it to first-hand.

A brigade of infantrymen snapped on their bayonets and began marching in columns of four. In front was Major George S. Patton, Jr., on a horse. He kicked his heels and signaled the advance of a line of cavalry. Behind him were six Renault tanks from World War I.  A machine gun crew prepared an emplacement on the avenue. Some naive Bonus Marchers thought it was a parade. People hung out windows and gathered on sidewalks to watch.

As Marchers became aware this was Armageddon, they started throwing bottles and rocks. Some ran. Others held their ground and prepared for hand-to-hand combat. The infantry halted and donned gas masks. Tear gas canisters exploded, shrouding the whole scene in acrid smoke.

Patton suddenly led a cavalry charge with sabers drawn and began beating Bonus Marchers with the flat of his sword. One vet, tears streaming down face, yelled, “This flag means nothing to me after this.” MacArthur ordered him to be arrested. Pennsylvania Avenue emptied as the men fled across the Anacostia River into the larger shantytown encampment.

MacArthur ordered his soldiers to pursue the veterans across the Anacostia River and raze the main Bonus Army camp.

President Hoover caught wind of MacArthur’s plan and rushed an order for him to cease and desist. MacArthur’s original orders had only extended to clearing Pennsylvania Avenue, not driving the whole Bonus Army out of town by force.

Major Eisenhower received he message from the White House and handed it to his four-star boss.  MacArthur glanced down at the paper, still in Ike’s hand, and said, “I can’t be bothered to read a letter during a military operation.” 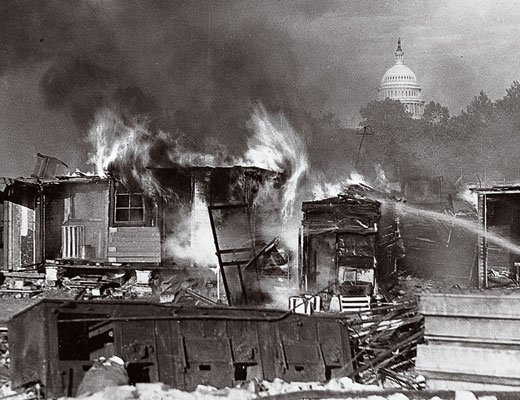 The troops crossed the 11th Street Bridge into Anacostia Flats. They shot tear gas into the unsuspecting encampment as they advanced, driving residents out of their tents and shacks. Then, the soldiers systematically burned the shanties, destroying, in many cases, everything the marchers owned.  MacArthur saw to it that Anacostia was completely leveled so that no Marcher could ever return.

The following brief video is a mash-up of archival and documentary footage depicting the scene:

The following morning, back in Albany, New York, Governor Franklin Delano Roosevelt, in the midst of a campaign against President Herbert Hoover for the White House, received a stack of the day’s newspapers. Headlines blared the news of the Bonus Army’s rout. FDR sat in stunned silence, taking in the details.

After a while, he looked up at an aide and said simply, “I think I’ve just won the election.” Roosevelt would later remark that Hoover simply “should have invited a delegation into the White House for coffee and sandwiches.”

One year later, now in the White House, President Roosevelt faced a smaller, repeat of the Bonus March. Having learned a lesson from Hoover, the President offered the men comfortable quarters at Fort Hunt, sent wife Eleanor as an unofficial emissary, and offered all the Marchers jobs with the CCC and later the WPA.

Meanwhile, the now Democratic Congress passed the Bonus Bill and sent it to Roosevelt to sign into law. But FDR, like his predecessor, disapproved of deficit spending and vetoed the legislation. Congress would override FDR’s veto in 1936. The surviving World War I veterans got their Bonus checks later that year. Many would long remember the difference that money made in those Hard Times of the Great Depression.

Perhaps the most important legacy of the Bonus March was the lesson it taught the country about how to treat its veterans. While the fighting still raged in 1944 during World War II, Congress considered what to do when 12 million veterans returned home from the war.  To its credit, Congress didn’t just hand out a post-dated check and call it even.  Rather, it passed the Servicemen’s Readjustment Act of 1944, the GI Bill.  The GI Bill had provisions for education, housing, and unemployment.  Almost 8 million veterans took advantage of the GI Bill, one of the most important pieces of legislation in the past 100 years.  The bill and the veterans it served remade America for the better, and that probably never would have happened if not for the challenge of the Bonus Army.