Why Was May 22 Chosen as Maritime Day?

When Congress created Maritime Day in 1933 hardly anyone noticed. It was in the First Hundred Days of Franklin Roosevelt’s New Deal, and all eyes were upon the alphabet-soup of agencies rolling out like new Model Bs off Ford’s assembly line: the AAA, CCC, NRA, TVA, FDIC.

But designating May 22 for the US maritime industry was part of FDR’s effort to revitalize the nation’s merchant fleet and secure its ships and crews in case of war. 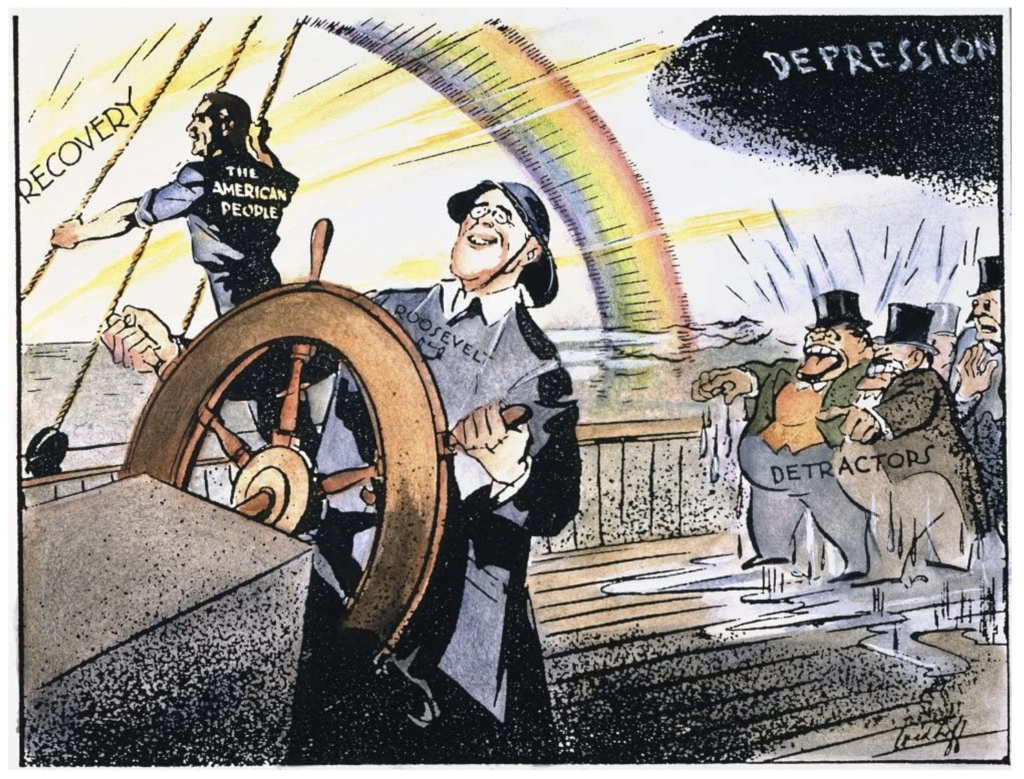 May 22 was an odd choice. On that day in 1819, the SS Savannah launched its attempt to be the first steamship to cross the Atlantic Ocean. Sure enough, the ship made it to Liverpool, England. But, by any other measure, the venture was a colossal failure. 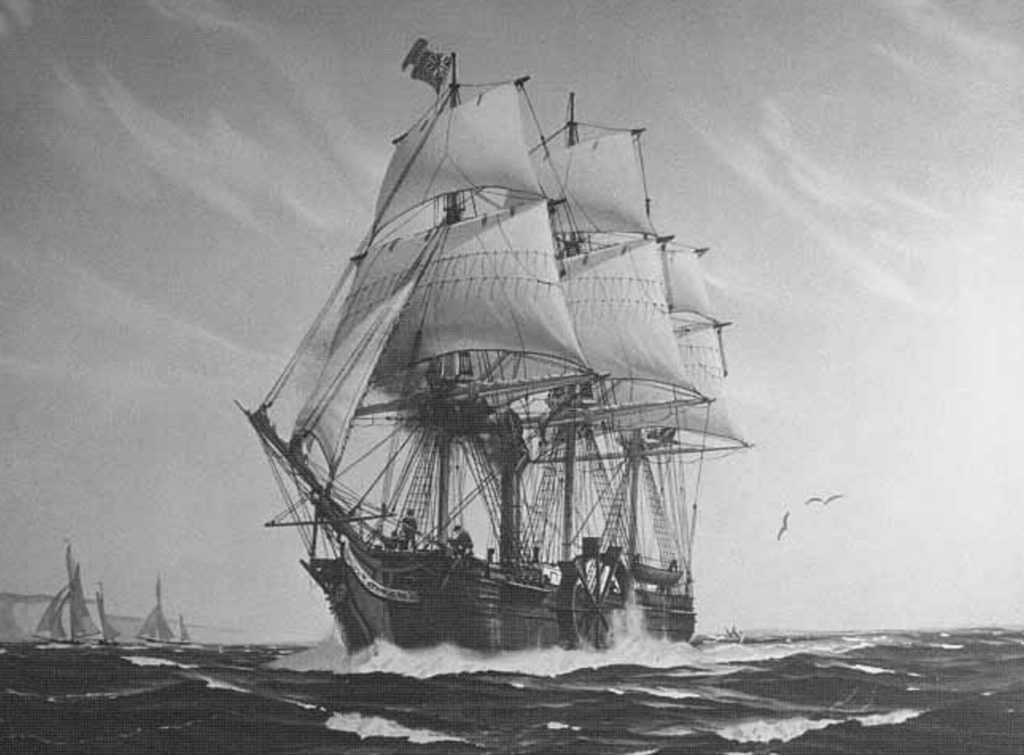 A painting of SS Savannah, 1819, by Hunter Wood

The trip was the brainchild of two Connecticut Yankees and distant cousins, Captains Moses and Stevens Rogers. Both were proponents of steam, though the science of steam powered propulsion through water was still in its infancy. Robert Fulton’s steamboat Clermont had made the first commercially successful voyage up the Hudson River just a dozen years earlier. 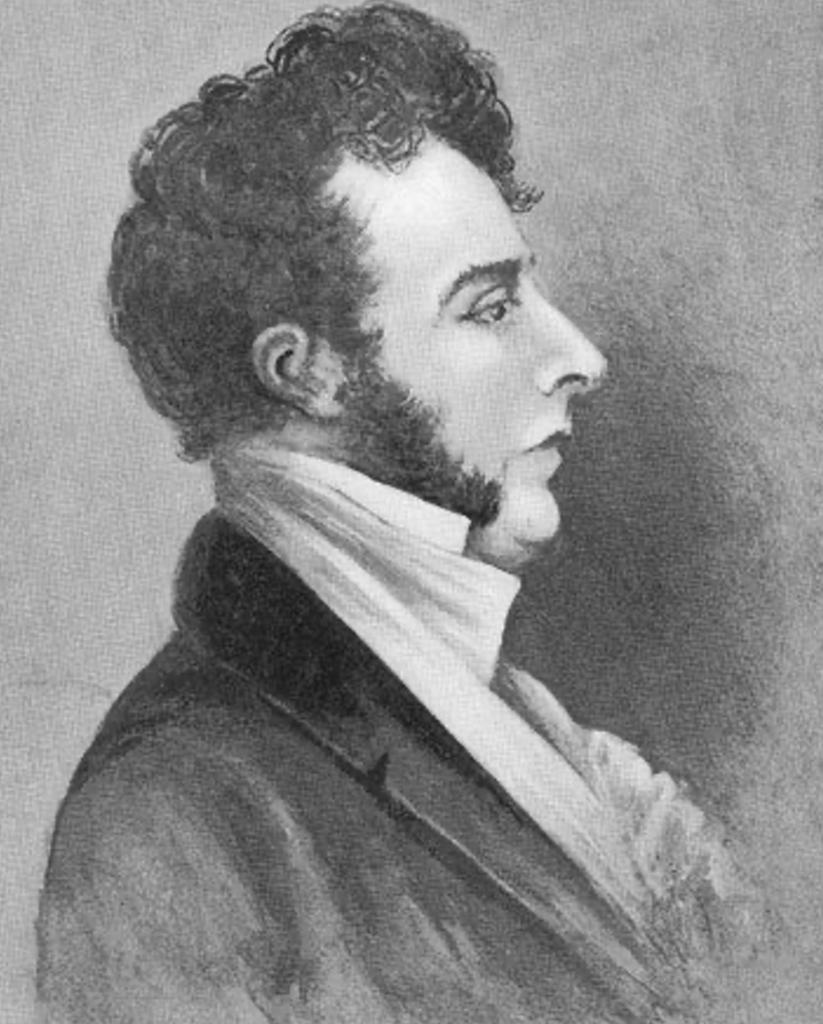 The Yankees Rogers believed that if a steamboat could run on inland waterways, then a steamship should be able to ply ocean sea lanes.

Backed by investors, Moses bought a three-mast, 109-foot ship of sail under construction in New York, the Savannah. Then, he searched for mechanics and metal shops skilled enough to retrofit the vessel with a steam engine, complete with side paddlewheels and smokestack. 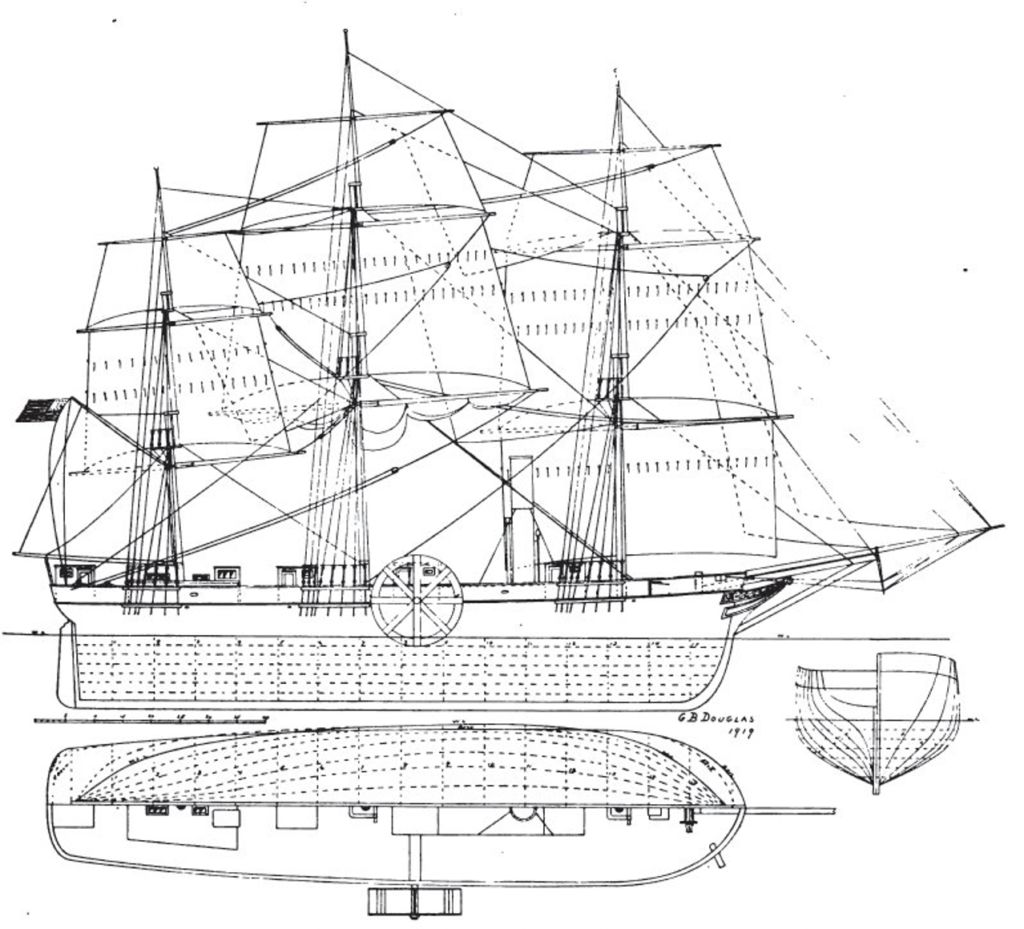 The result was something of a Franken-ship—a half-sail, half-steam hybrid that weighed 75 tons more than other sailing packets its size. As a prestige project, the Savannah boasted 16 state rooms decked out with imported carpets and curtained with mirrors. The steam engine consumed most of the cargo space, so paying passengers were essential.

New York buzzed with gossip about the maritime novelty, and visitors flocked to the harbor for tours. They admired the elegant accommodations but balked at the iron furnace and double copper boilers below decks. The Savannah soon acquired a nickname, “Steam Coffin.”

Moses and Stevens failed to recruit not only passengers in New York, but also crews. Sailors refused the job, worried about a mechanical failure or boiler explosion at sea. Moses’s mother even denied his 18-year-old brother, Ebenezer, permission to serve aboard ship. 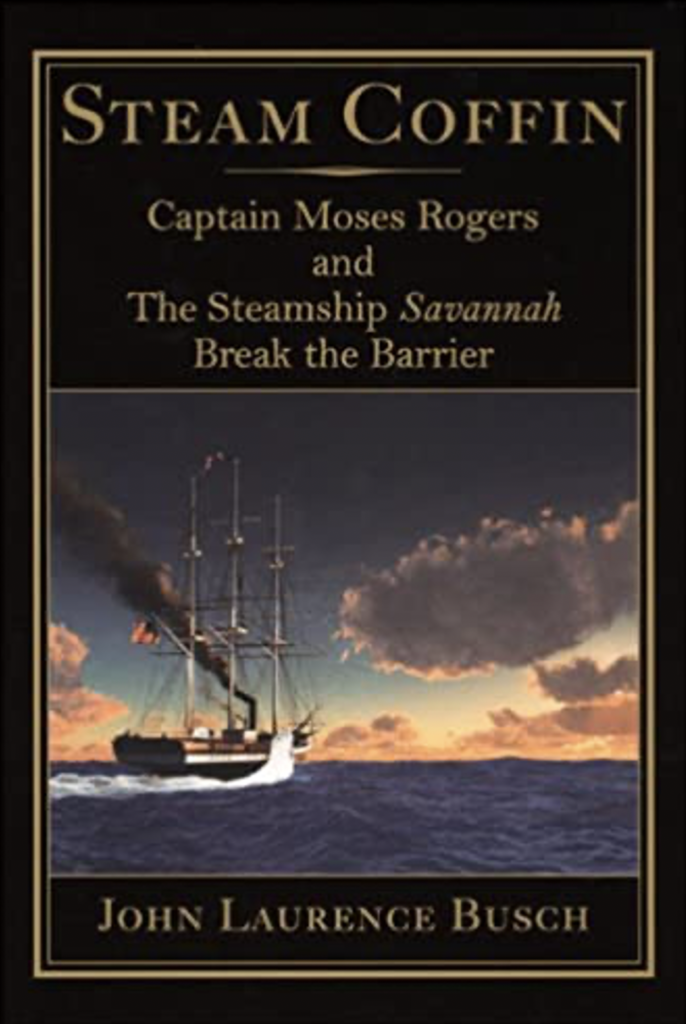 Stevens Rogers eventually enlisted seamen from his hometown of New London, Connecticut, and the Savannah sailed off—rather than steamed—to its new home in Savannah, Georgia. When the ship arrived at 4:00am on April 6, a large crowd was there to see the Frankenship with their own eyes.

Despite extensive advertising in the coastal South, no passengers stepped forward for the Savannah’s maiden transatlantic voyage, scheduled for May 20. The trip would go on, however, if only to make history.

The morning of the scheduled departure, one of the ship’s hands recruited from New London returned from a night of drinking, fell off the gangplank and drowned. The accident delayed the shoving off two days, to May 22.

The SS Savannah’s 29-day crossing of the Atlantic Ocean from Savannah to Liverpool, England, was largely uneventful. That’s because the steam engine was hardly used. The weather favored sail, and despite the piles of coal and cordwood aboard, Captain Moses Rogers feared running out of fuel. The few times the seas were placid and the paddle wheels were engaged, neighboring ships spotted smoke bellowing from the Savannah and rushed to its aid, assuming a catastrophic fire aboard. Almost 90% of the journey came from wind propulsion, rather than steam. 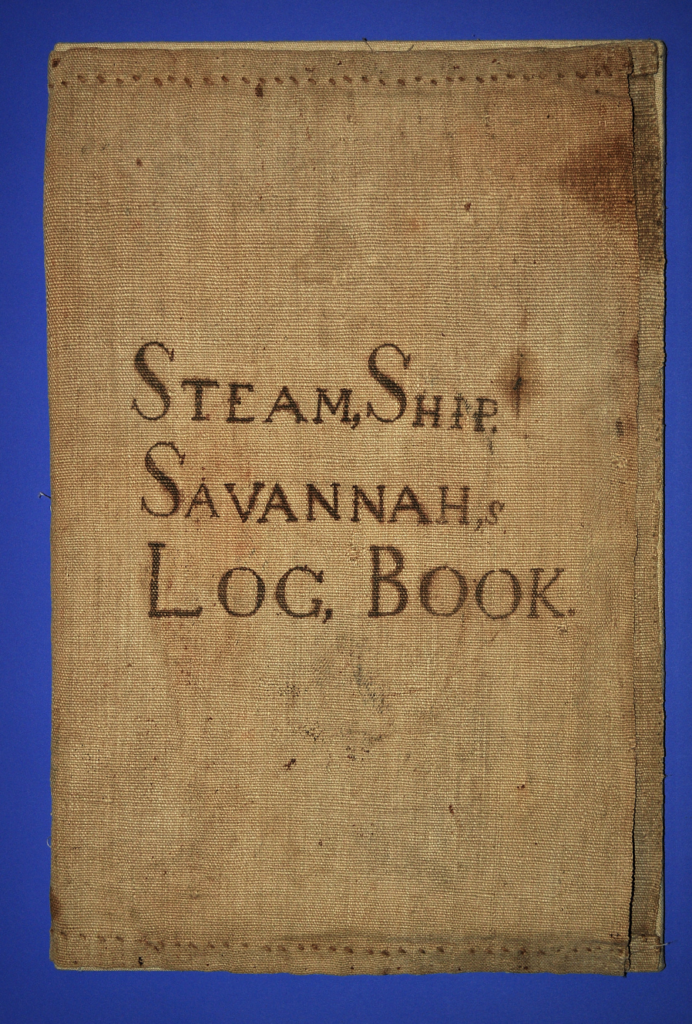 Moses Rogers’s new mission, once he landed in Liverpool and bathed in local praise for “Yankee ingenuity,” was to find a buyer for the Savannah. The ship was a financial sinkhole, and economic depression back home—“The Panic of 1819”—had bankrupted the Savannah’s investors.

Secretary of State John Quincy Adams furnished Captain Rogers with letters of introduction for a Baltic tour that took the ship to Sweden, Finland, Russia, Denmark, and Norway to drum up commercial interest. The Savannah won admiration wherever it went, but no one was willing to buy a ship that couldn’t carry cargo and scared passengers.

A buyer was eventually found back in New York. The first thing the new owner did was remove the engine, smokestack, and paddlewheels and restore the Savannah back to its original sailing rigging. The ship then began mundane packet service between New York and Savannah. One can almost imagine observers on shore whispering to each other about the once-proud celebrity reduced to commoner. 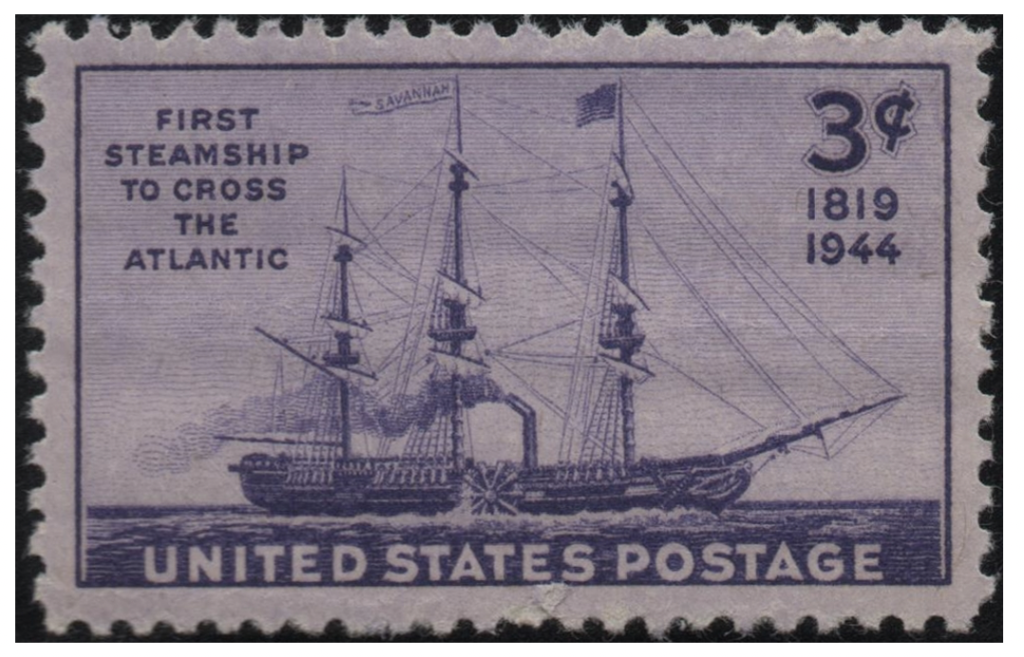 Perhaps it was merciful that a gale ground the Savannah on the southern tip of Fire Island in Long Island Sound on November 5, 1821, less than two years after the ship’s return from Europe. Passengers and cargo were saved, and some of the interior was salvaged, but the Savannah itself spent the next few decades being beaten, smashed, and pulled under by ocean waves. 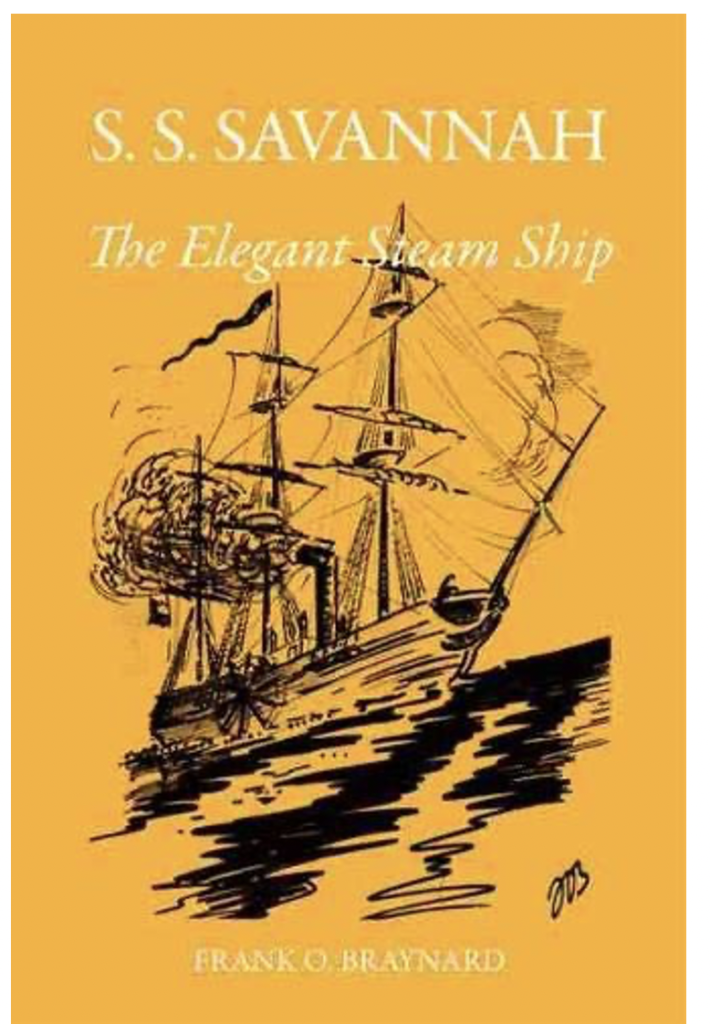 But the legend of the SS Savannah lives on as an “Illustrious Failure,” in the words of maritime historian and Savannah champion Frank Braynard. Because of Maritime Day, we remember the Savannah as the ship that defied the conventional wisdom that human beings would always remain in thrall to wind and storm, wave and tide.

Before railroads, automobiles, and airplanes, the Savannah struck a blow against the tyranny of spatial distance and expanded our dreams of where we could travel.