The Veterans Breakfast Club was born from a remarkable gathering of thirty World War II veterans brought together in the suburbs of Pittsburgh in the fall of 2008 simply to share their stories. Emotion ran high, and the stories were so enthralling that the organizers, local businessman Dan Cavanaugh and historian Todd DePastino, scheduled more sessions, this time open to the public. One veteran’s daughter said upon leaving, “I’ve never heard my dad tell these stories before. There’s a real need for this kind of thing.”

From those first meetings came the idea for a non-profit that would host local storytelling programs where veterans of all eras and branches of service could share their experiences with the public. The VBC found venues throughout the greater Pittsburgh region to carry their monthly programs. In 2010, the VBC held thirty events drawing 50-150 people to each. Demand for events increased, as did awareness of the need to record and share the stories told with a wider public. The VBC partnered with local podcasters, documentarians, and digital storytellers to create Veteran Voices of Pittsburgh Oral History Initiative.

Up to this point, the VBC was an all-volunteer organization relying on small sponsorships and donations. Operations grew with funding from the Jefferson Regional Foundation, the Hillman Family Foundations, and the Heinz Endowments, which allowed the VBC to expand its programs for post-9/11 veterans, those who have served since September 11, 2001. We added evening events and a regular podcasts about veterans and their stories to our roster of activities.

After eleven years, we know the success of our programs comes, in part, from meeting veterans and community members where they are. In Pittsburgh, that means going out into the neighborhoods and holding events in Legion halls and brewpubs, libraries and banquet rooms, church basements and faith-based coffee houses. In a couple of occasions, we’ve held events on a donor’s private property. We’ll go anywhere the community can gather for storytelling and conversation.

In 2017, we held our first workplace program at FedEx Ground offices. Employees gathered to hear stories of service from the colleagues and co-workers. We’re eager to expand this type of workplace-based programming.

From one perspective, our accomplishments are impressive. We’ve built a thriving and nonprofit that has grown organically around dozens of communities in Western Pennsylvania, reaching thousands of veterans and connecting them to members of the community—employers and service providers included.

But, from another perspective, we’ve done very little. Our region is home to 235,000 veterans. Nationally, there are 12 million veterans. We’ve only started to scratch the surface of our outreach. In addition, veteran family members represent another population touched powerfully by our programs.

On March 10, the Veterans Breakfast Club held its last face-to-face event of 2020. Later that week, COVID-19 shut down our in-person veterans storytelling programs.

But before March was over, we were back at it, holding our events virtually on Zoom and simulcast on Facebook Live and YouTube Live. 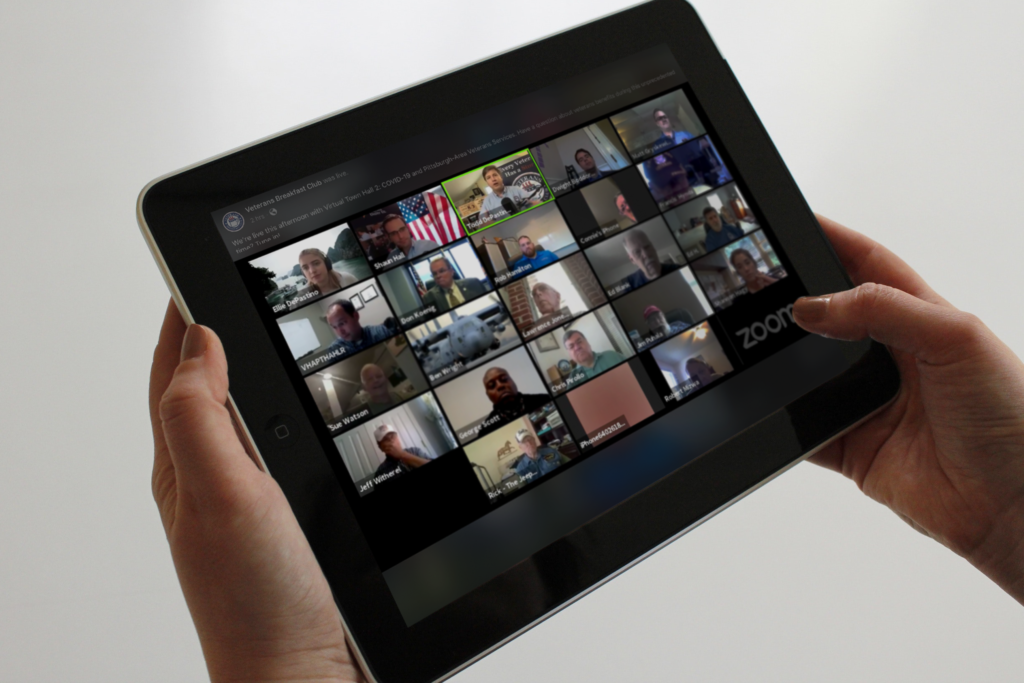 Since then, we’ve held 87 live virtual programs with thousands of people participating, including those across the country and the world. We’ve heard stories from people of all eras, ages, and branches of service, from a 100-year-old Pearl Harbor survivor to a fresh West Point graduate. Non-veterans, including elementary school and college students, have joined us to ask questions and to listen. Gold Star Mothers and Families have remembered their loved ones with us, so we could remember them too.

We think our VBC model can benefit communities around the nation, and we seek to reach as far as we can. Every veteran has a story. We want to hear every one.