Skip to content
Thich Quang Duc, the Buddhist Monk Who Lit a Match and Sparked a Revolt in 1963

Thich Quang Duc, the Buddhist Monk Who Lit a Match and Sparked a Revolt in 1963 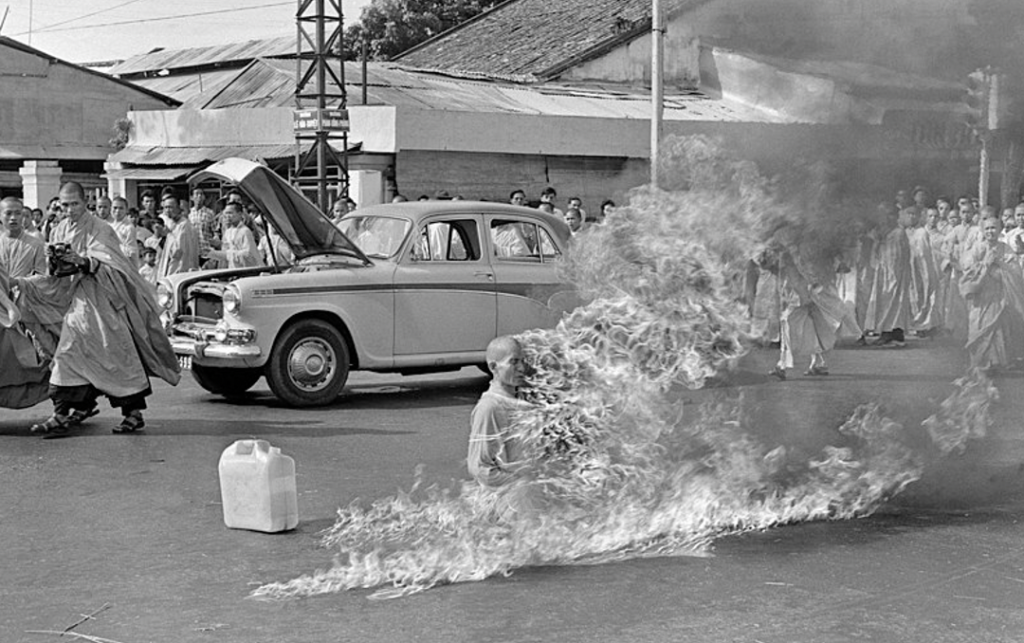 On one of our VBC trips to Vietnam, a sight at the Pagoda of the Celestial Lady in Hue stopped me in my tracks: a baby blue Austin sedan on display beneath the Pulitzer Prize winning photo that had introduced millions of Americans to the word, “Vietnam.” 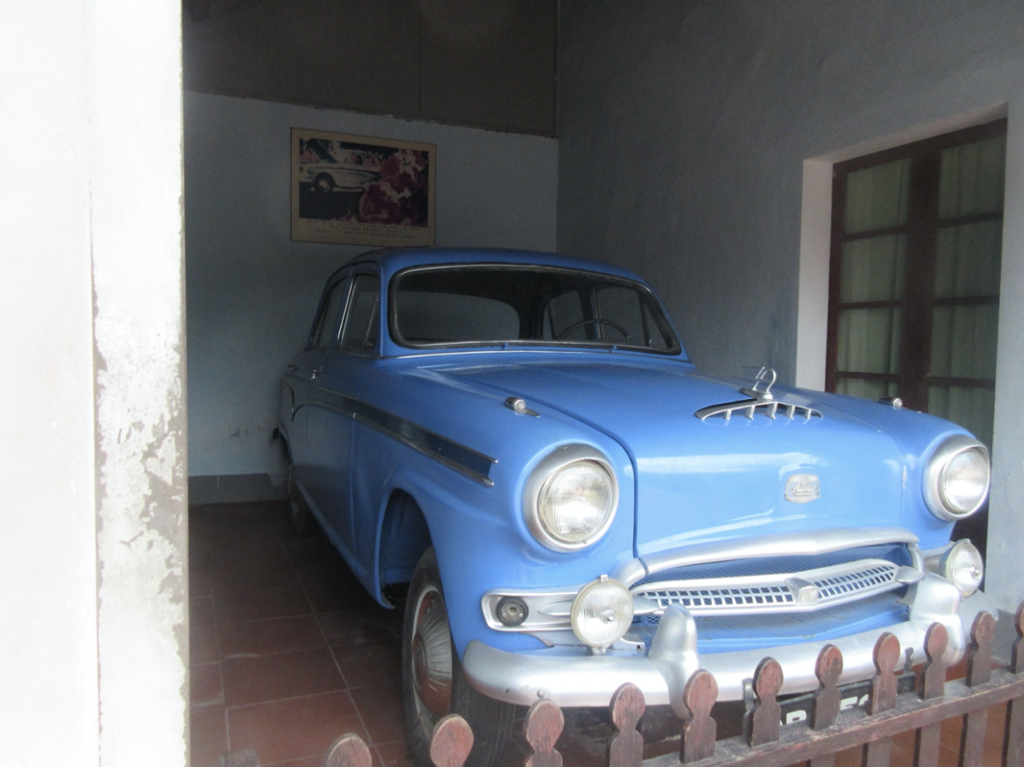 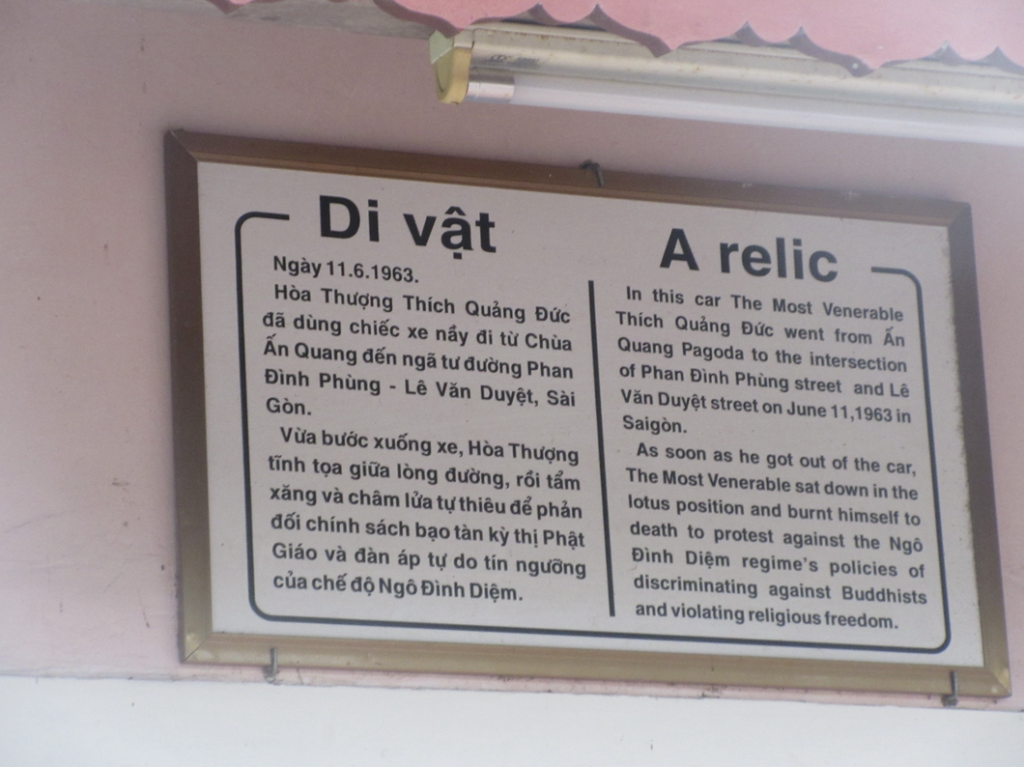 On June 11, 1963, Buddhist monk Thich Quang Duc had stepped out of the car in a busy intersection near Saigon’s Presidential Palace and sat down on a cushion in the street. A fellow monk grabbed a five gallon jerry can of gasoline from the car trunk and poured it over Thich Quang Duc, who by this time was deep in prayer. Quang Duc finished the prayer, lit a match and dropped it into his lap. His robes erupted in flame.

Hundreds of devotees surrounded the monk to prevent fire brigades or policemen from interfering. Spectators, including some police, fell to their knees in adulation. There were tears and some wailing. Quang Duc, however, remained motionless and completely silent, betraying not a hint of pain. Within ten minutes, he was thoroughly immolated and fell backwards. AP journalist Malcolm Browne captured the event in stunning photographs that appeared the next day in newspapers around the world.

Quang Duc himself left a letter:

“Before closing my eyes and moving towards the vision of the Buddha, I respectfully plead to President Ngô Đình Diệm to take a mind of compassion towards the people of the nation and implement religious equality to maintain the strength of the homeland eternally. I call the venerables, reverends, members of the sangha and the lay Buddhists to organize in solidarity to make sacrifices to protect Buddhism.” 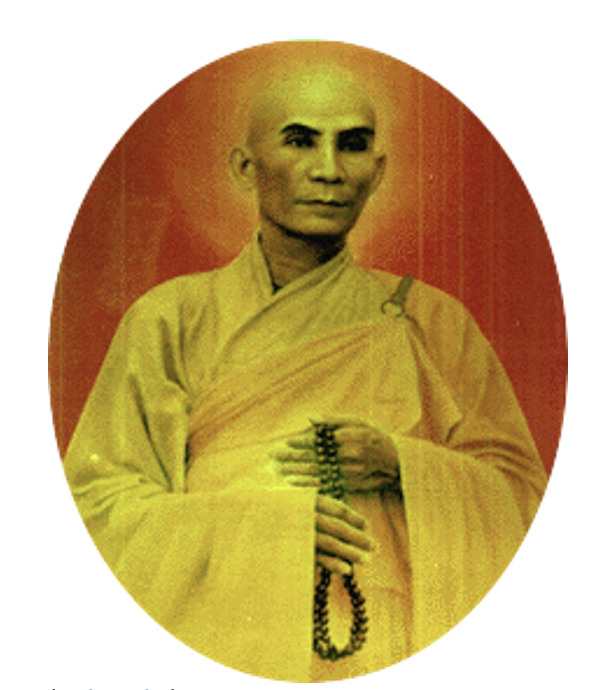 Monks didn’t normally go around setting themselves on fire. They usually stayed out of politics. But, if monks determined that their flock was in jeopardy, they reserved the right to act.

That’s exactly what happened in the spring of 1963 in the Republic of Vietnam, South Vietnam. President Ngo Dinh Diem, supported largely by the United States, alienated his countrymen by openly discriminating against Buddhists and favoring his fellow Roman Catholics in every aspect of Vietnamese life, from government and military promotions to land grants and tax breaks. The problem with Diem’s pro-Catholic policies was that South Vietnam was overwhelmingly Buddhist, at least 70% so. 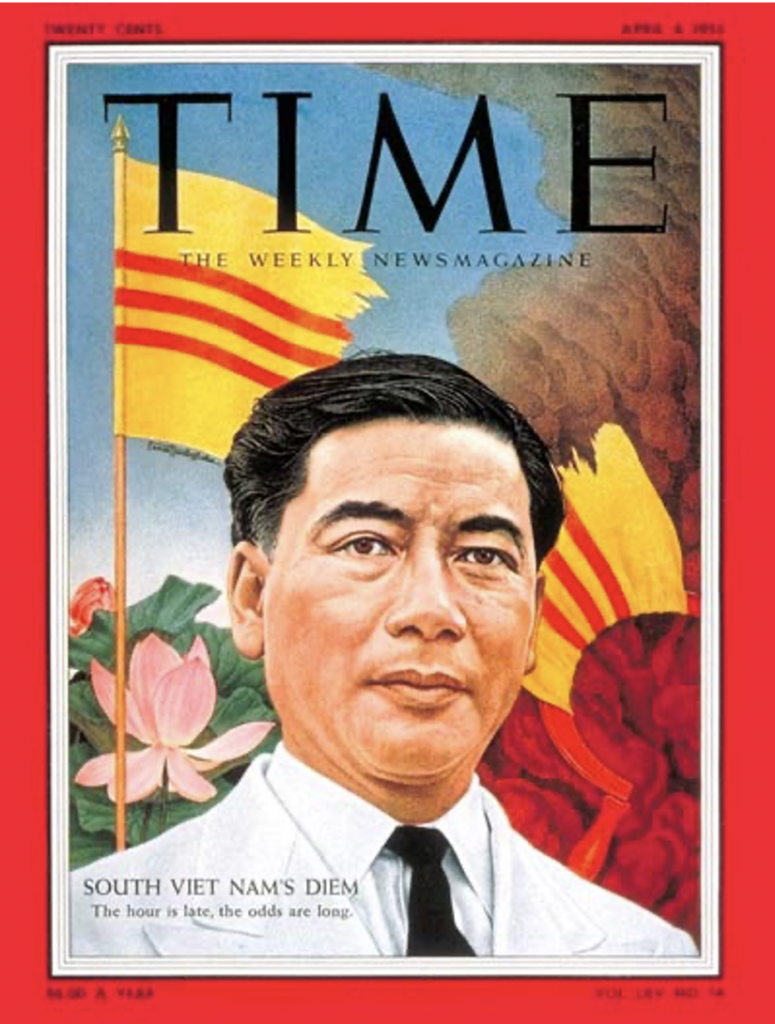 The last straw for Buddhists was Diem’s prohibition on public celebrations of Buddhist festivals.

On May 8, 1963, thousands gathered in the city of Hue to celebrate the Buddha’s 2,527th birthday. Normally, there were floats and lantern parades, but this celebration had a sharp political edge, with marchers demonstrating with Buddhist flags, which had been specifically banned by Diem. The national police and army (ARVN) ordered the demonstrators to disperse. Then, the government forces attacked. Within minutes, nine Buddhists were dead, including two children, who had been crushed under armored personnel carriers.

Diem denied ARVN and police involvement, casting blame on the Vietcong. The disavowal only fueled further protests. ARVN forces used tear gas to quell the rising demonstrations around the country.

The Buddhists were media savvy and politically astute. They knew the best way to get President Ngo Dinh Diem to agree to their demands for religious equality was through US public opinion. By creating a crisis in Vietnam, they could make President John F. Kennedy pay attention and pressure Diem, who was supported by large amounts of American aid, to ease up on the Buddhists.

Thich Quang Duc’s associates made sure to contact American journalists like the Associated Press’s Malcolm Brown, letting them know that “something important” would take place on the streets of Saigon on June 11.

Browne’s award-winning photographs of Thich Quang Duc’s self-immolation did indeed affect the US President. “Jesus Christ!” exclaimed JFK when he saw the images on the front page of the morning papers. 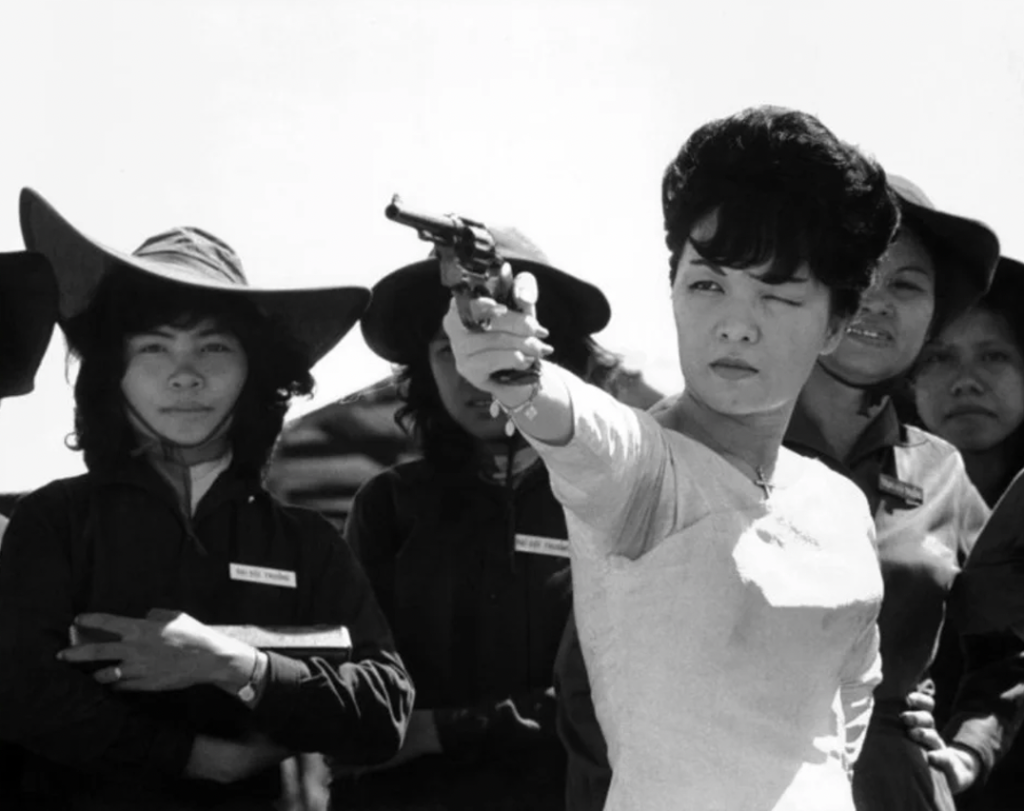 Ngo Dinh Diem remained intransigent. The South Vietnamese leader resisted the Kennedy Administration’s appeals for calm and a semblance of democratic reforms and power sharing. Diem’s sister-in-law and South Vietnam’s effective “First Lady,” Madame Nhu, made her own headlines by declaring: “If the Buddhists want to have another barbecue, I will be glad to supply the gasoline.”

As the Buddhist Crisis escalated, and the Kennedy Administration lost faith in Diem’s ability to hold South Vietnam together as a non-Communist American ally. Throughout the summer, Diem’s own military leaders weighed ousting Diem from power. They consulted with American CIA operatives and State Department officials, who kept the White House informed and the evolving plot.

In early October, JFK gave the green light: if the ARVN generals led by General Duong Van “Big” Minh staged a coup against Diem, the US would not interfere.

The coup began on November 1, 1963, when Minh and his co-conspirators seized power at the Presidential Palace. Diem and his brother Nhu escaped to the Cholon neighborhood of Saigon through an underground tunnel, refusing offers of safe passage and asylum out of the country. 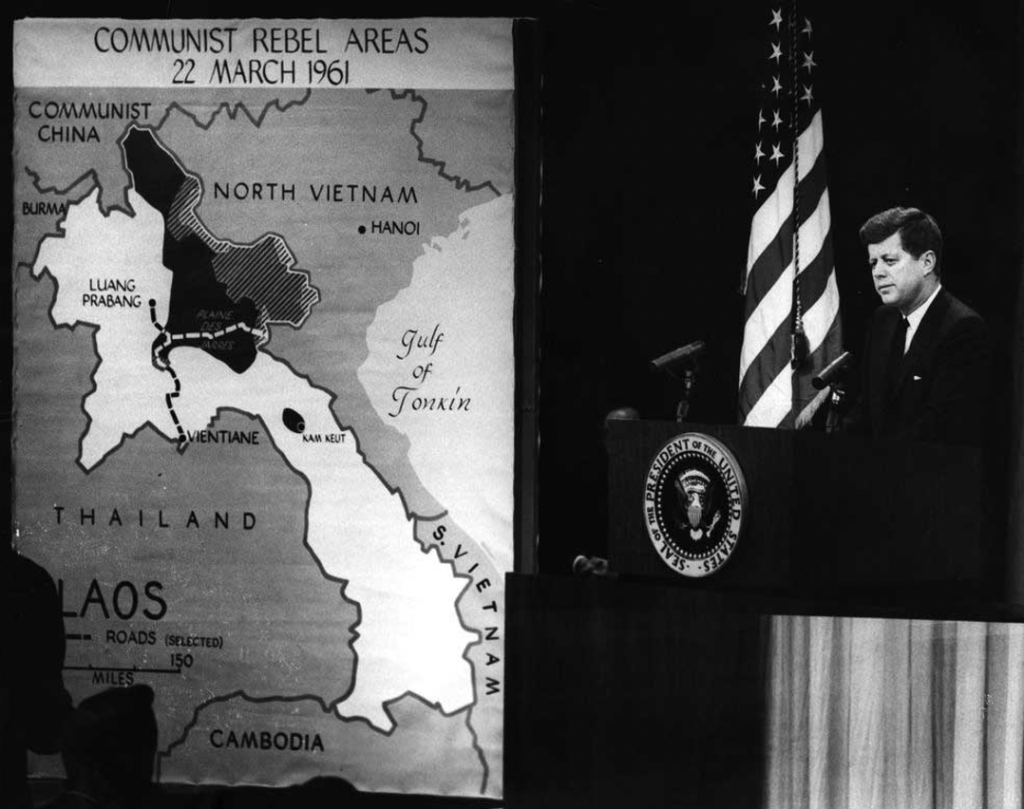 The brothers were caught the next day and killed by ARVN officers in the back of an armored personnel carrier.

Back in Washington, the President recoiled at the news of Diem’s death. He’d approved the coup, not the assassination. He now worried that Diem’s removal wouldn’t improve the situation in Saigon. In private tapes, now available to the public, you can hear Kennedy struggle with the question of what the future held for Vietnam after Diem’s assassination.

“The question is now,” he says, “whether the generals can stay together and build a stable government.”

Kennedy would not live to see the answer. Three weeks after Diem’s killing, JFK died in Dallas from an assassin’s bullet. 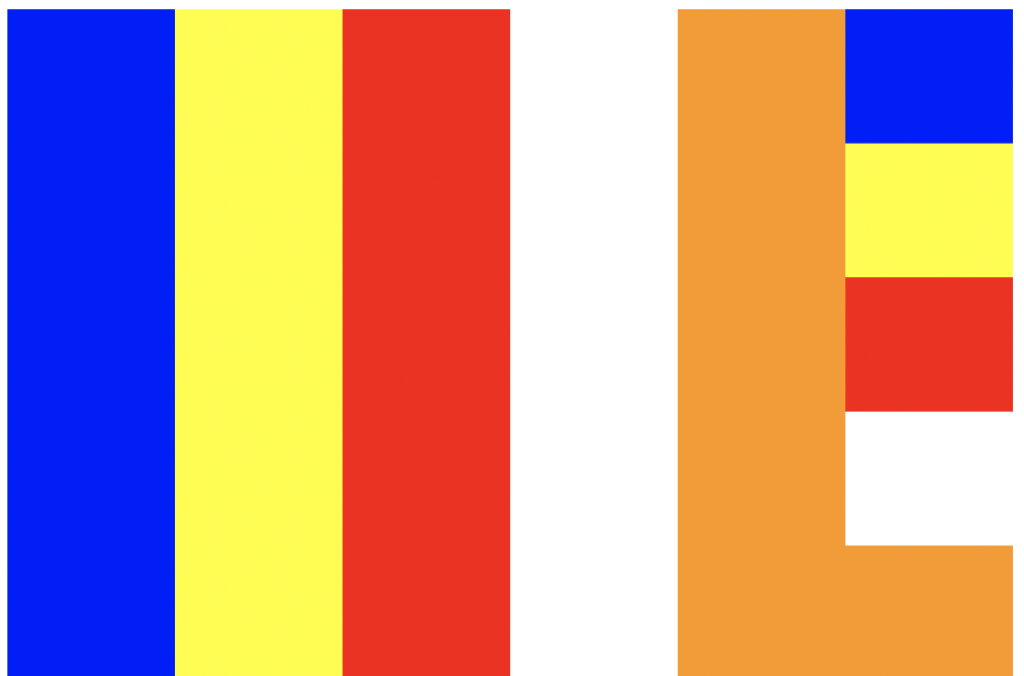