How the Great Pumpkin Ended Up in Vietnam

How the Great Pumpkin Ended Up in Vietnam 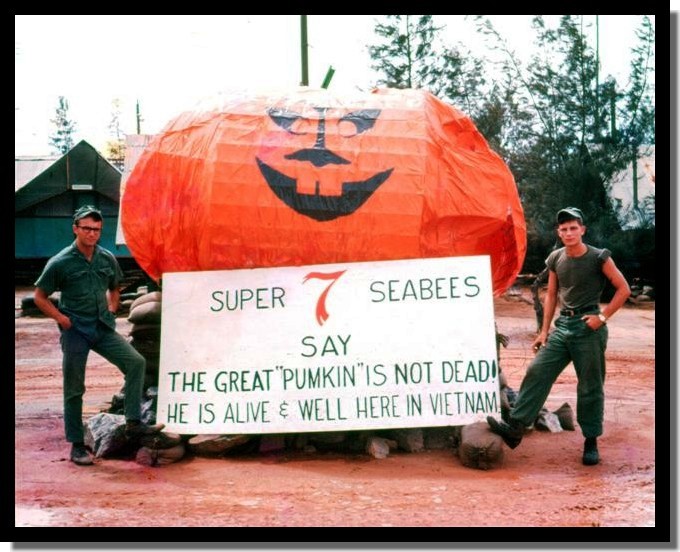 1966 was the year It’s the Great Pumpkin, Charlie Brown premiered on national television. The primetime special ended with Linus furious that despite waiting patiently in the pumpkin patch, he was never graced by the presence of the Great Pumpkin. Nor was he delivered any Halloween gifts by the giant gourd.

But maybe it was because the Great Pumpkin was over in Phu Bai.

That same year, MCB-7 Raymond Cochran worked to boost the morale of his fellow Seabees by constructing a massive “Great Pumkin.” Ray’s friends EA-3 Mike Wagner and PCSN Carroll Broussard built the structure out of materials at their camp.

“We used a surplus emergency parachute for the pumpkin. They’re all orange,” Ray said. What’s holding it up is rebar—steel reinforcements for concrete. “Yeah, we ‘borrowed’ some 6×6 squares of that steel wire,” Ray admits. “Those guys in the picture built it, and I painted the face and the sign.”

Ray joined the Seabee reserves in 1962 at 17 years old. He did four years in the Reserves before going active duty with the Mobile Construction Battalion 7 —The “Magnificent 7,” or, seen here, the “Super 7.”

It seems like Ray was destined for the Navy Seabees. “My dad was retired Navy. Growing up, he would give me room and board and nothing else.” Ray was always crafty, too. “I won the draftsman of the year award in high school for my technical drawings.”

But it wasn’t just drafting that Ray was good at. “We had to go to Camp Lejeune for Marine training, and there was a Marine sergeant attached to our Seabee outfit. Out of the 800 guys in my outfit, I was the only one who fired expert. The Marines actually tried twice to recruit me as a sniper. But I liked the Seabees too much.”

Good thing, too, or else we never would have seen the “Great Pumkin” alive and well in Phu Bai. Happy Halloween!